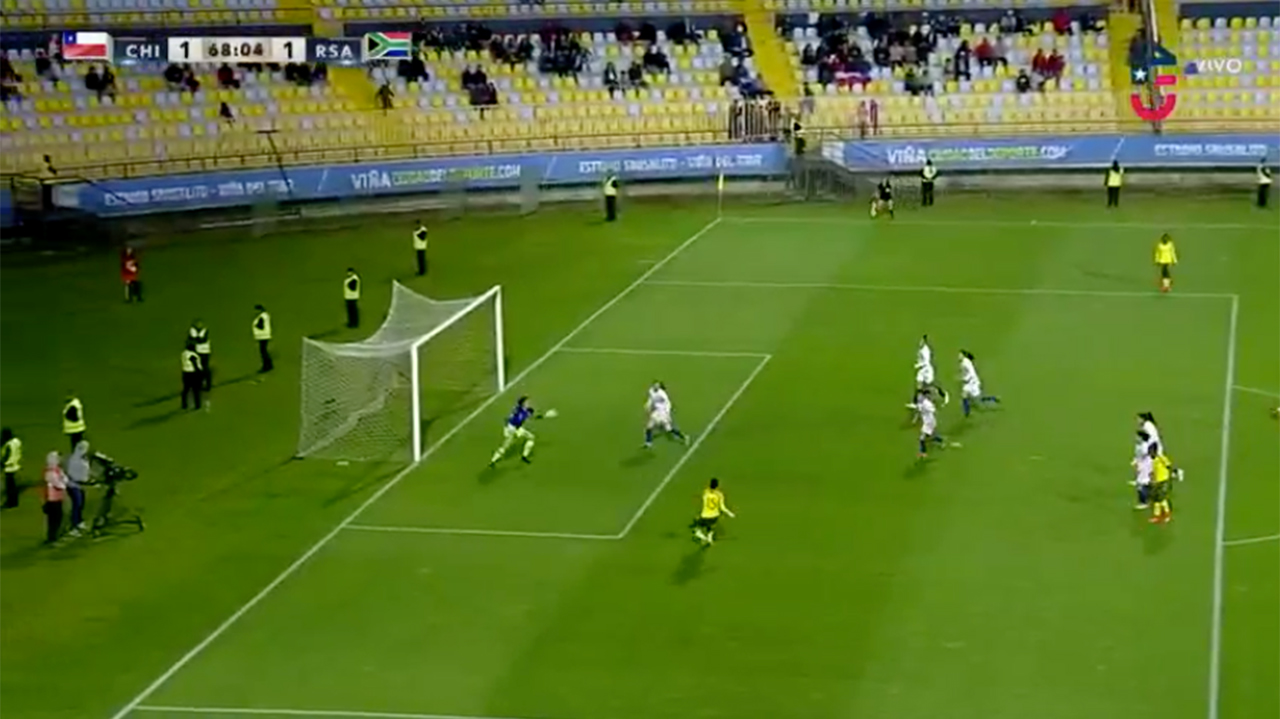 The South Africans had to play with 10 players from the 38th minute after striker Jermaine Seoposenwe was red-carded for a late tackle.

Banyana Banyana head coach Desiree Ellis had made two changes to the squad that started the final of the COSAFA Women’s Championship held in Port Elizabeth last month, as she brought in Leandra Smeda for Thembi Kgatlana, while Bambanani Mbane started ahead of Noko Matlou.

This was a historic first meeting between South Africa and Chile – with Banyana Banyana the first ever-African team to face the South Americans in their hometown.

Ellis’ charges had a chance on the 15th minute when Refiloe Jane’s volley just went wide.

About a minute later Kgaelebane Mohlakoana had a shot at goal, and with the keeper beaten, she could not beat the crossbar, and the ball went out.

The home side also had chances of their own and could have taken the lead in the 21st minute from a free-kick that went directly to goal but Kaylin Swart was equal to the task and parried it for a corner.

Chile did however get their goal – in the 36th minute, after Banyana Banyana failed to defend from a corner and Carla Guerrero rose the highest to head in and take a 1-0 lead.

Seven minutes from the break the visitors found themselves in deeper trouble when they went a player down after Jermaine Seoposenwe was given her marching orders for an off the ball foul, but South Africa hung in to see the end of the half.

Sebati made her presence felt when she hit a great volley in the 65th minute but it hit an opponent and fell into the arms of Christiane Endler in the Chile goals.

Despite being down to ten players, South Africa held their own, and got the much-needed equaliser when Jane found herself alone in the box in the 67th minute and easily slotted past Endler to make it 1-1.

This was her 10th goal in Banyana Banyana colours, making her 91st appearance – Jane was continuing from where she left off when she scored two goals in the final of the COSAFA Women’s Championship played in Port Elizabeth last month to help South Africa lift the trophy.

But the jubilation did not last long as two minutes later captain Janine van Wyk was adjudged to have fouled a player in the box, and a penalty was awarded to Chile La Roja Feminina.

Chile Have the Final Say

Karen Araya stepped up and made no mistake from the spot kick to restore the home side’s lead.

Battling hard for an equaliser, Ellis brought on fresh legs with Nompumelelo Nyandeni replacing Kholosa Biyana late in the second half, but did not bring the desired result – and it ended 2-1 to the South Americans.

This was Banyana Banyana’s first loss in seven matches.

After losing to Sweden in January in Cape Town, they registered back to back victories over Lesotho in the 2018 Africa Women’s Cup of Nations qualifiers earlier this year. They continued the winning streak when they went unbeaten in five matches at the COSAFA Cup, where they won gold.

Both South Africa and Chile were using the matches for preparations – Chile has qualified for the 2019 FIFA World Cup in France, while the visitors are getting ready for the AFCON tournament in Ghana next month, which also serves as a qualifier for the soccer showpiece in France.

The two countries will do battle again in the second international friendly on Tuesday, 9 October, at Estadio Santa Laura in the capital Santiago.

Photo 1 caption: A moment of footballing magic in the 68th minute as No. 15 Refiloe Jane expertly connects boot to ball to create a stunning goal to bring the sides on par at 1 goal apiece, after SA trailed 1-0 at half-time. Chile capitalised on the visitors’ euphoria to score two minutes later, and held on for the win in the opening of two international friendlies. Image: Screengrab of ChileVision’s broadcast of the match on Twitter’s video platform, Periscope

Photo 2 caption: Refiloe Jane has scored the past three goals for Banyana Banyana, the only two goals to secure the COSAFA Women’s Champs win for Banyana Banyana in Port Elizabeth added to this lone goal for SA in Chile. Image: Screengrab of ChileVision’s broadcast of the match on Twitter’s video platform, Periscope

Photo 3 caption: Chile keeper Christiane Endler had no chance after an excellent assist found Jane in acres of space, where she put her target-shooting practice to good effect. SA are using the Chile tour to prepare for the AFCON tournament in Ghana in November, which also serves as a qualifier for the FIFA showpiece in France. Image: Screengrab of ChileVision’s broadcast of the match on Twitter’s video platform, Periscope