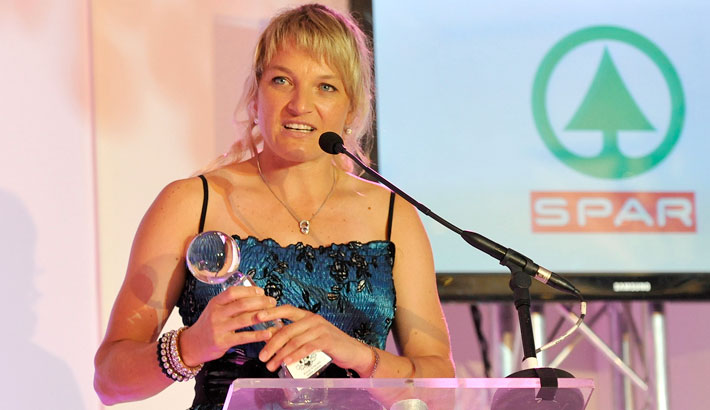 In total 14 match officials were unveiled by the International Rugby Board (IRB), eight referees and six assistant referees, with Jordaan being the only South African.

Two of the remaining seven match referees were from New Zealand, while the USA, England, Ireland, Australia and Canada respectively each had one representative.

Jordaan will be the third South African female referee to take charge of the whistle at a Women’s World Cup, following in the footsteps of Jenny Bentel and Kim Smit.

“Marlize has been an inspiration for female referees in South Africa, and it gives me great pleasure to see her receive the recognition she deserves,” said SARU’s GM for Referees Andre Watson. “This is a fantastic achievement as this honour is bestowed only on the best referees in the world. Her work ethic is admirable and so is her passion and dedication, so is great to see her following in the footsteps of Jenny and Kim.”

The Women’s Rugby World Cup will be hosted from August 1 to 17, with the pool matches being played in Marcoussis, near Paris, and the final stages to be held at Stade Jean Bouin, the home of Stade Francais.

Jordaan made history last year by becoming the first female to officiate a men’s Sevens international when she took charge of the IRB Sevens Rugby World Cup qualifier between Peru and Paraguay in Brazil in February.

During her career as a player she represented the Springbok Women’s team at the Nations Cup in Canada in 2009 and she played Tests in Dubai and Scotland.

Commenting on the referee appointments IRB Women’s Match Official Selection Committee chairman John Jeffrey said: “These referees and assistant referees have proven themselves to be the top match officials in the women’s game and fully deserve their appointment to what is women’s Rugby’s pinnacle tournament.

“It is a great achievement for each of them to have been selected and it is a testament to their hard work and dedication. I would like to congratulate them and wish them all the best for the tournament in August,” Jeffrey concluded.

Photo caption: 2013 gsport Woman of the Year, Marlize Jordaan, is the only South African on an eight-member IRB panel to officiate at the 2014 Women’s Rugby World Cup in France in August. Photo: Rebecca Hearfield / gsport