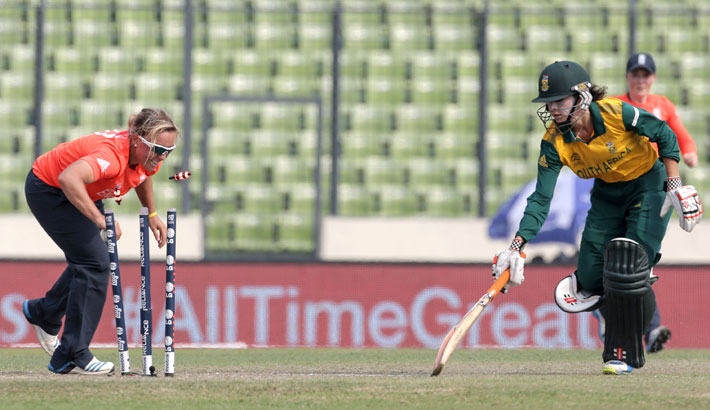 Experience won the day for England when they comfortably beat the Momentum Proteas by nine wickets in the second semi-final of the ICC Women’s World T20 in Dhaka, Bangladesh, on Friday.

(Click here for to visit the tournament home at the official ICC-Cricket website, Scroll down for Result, Groups and the Momentum SA Proteas Team)

England restricted South Africa to a meagre 101 all out after winning the toss and putting them in to bat. A combination of good fielding by England and poor running between the wickets by a nervous looking South African side saw five run outs in their innings.

The South Africans got their first shake up when they lost power hitter, Lizelle Lee, to Anya Shrubsole for a duck off the third ball of their innings. She struck again in the third over, bowling Trisha Chetty for three to finish with figures of 2/12. Yolandi van der Westhuizen (6) was the third wicket to fall inside the first four overs, this time trapped leg before by Rebecca Grundy.

England’s fielding was sharp, seeing two run outs in the 10th over to remove Dané van Niekerk and Marizanne Kapp for seven and nought respectively. Skipper, Mignon du Preez, tried to steady the ship when she walked to the crease with her side five down for 33 runs. She scored 23 off 32 balls before she was dismissed by Grundy (2/22), leaving South Africa floundering on 55/6.

Eighteen year old Suné Luus (5) added a 20-run partnership with Chloe Tryon before she departed after a freakish clash at the middle of the crease with her batting partner saw them both knocked on their backs when chasing a risky single.

Tryon made the top score, contributing 40 runs off 31 balls including three fours and two sixes to steer her side to a respectable total.

England’s reply was calm and patient. Captain, Charlotte Edwards, shared a 67-run opening stand with Sarah Taylor (44*) before she was caught and bowled by Luus for 36 at the start of the 12th over. Taylor was joined by Heather Knight (21*) who chipped away easily at the required runs and managed a comfortable victory for their side.

Du Preez was disappointed with the result but still proud of how far her team got in the tournament.

“Our main objective before we came here to Bangladesh was to reach the semi-finals and we did that,” she said. “We played some amazing cricket and I am so proud of the team’s character and determination throughout the tournament.

“We got knocked out by one of the best teams in the world, but I know that with more exposure to the calibre of cricket played by sides like England and Australia, we will go far as a team and country,” Du Preez continued.

The South Africa women’s team played their first live TV match today and Du Preez stressed how vital it is for the further development of the game that the team get more exposure back home.

“Playing in front of a live TV audience in South Africa was really special for us. It’s too bad that the women’s group matches were not televised and the country only got to see us lose, but this is a huge step in the right direction for women’s cricket in South Africa.

“I feel that if there is more exposure of our games to the public more and more young girls will aspire to play cricket for their country and that can only add to the growth of the game,” she concluded.

South Africa coach, Hilton Moreeng was very proud of his side’s achievement. “This team has come a very long way and I am so proud of the way they have conducted themselves in this tournament,” he said.

“Today we did not play our best cricket, but the fight and the hunger was still there when they fielded.

“I am extremely proud of the progress they have shown in reaching our objective of reaching the semis of the World T20. Now, we will look to build on that milestone and continue to push the women’s game forward in the coming months with the tours that have been arranged.”