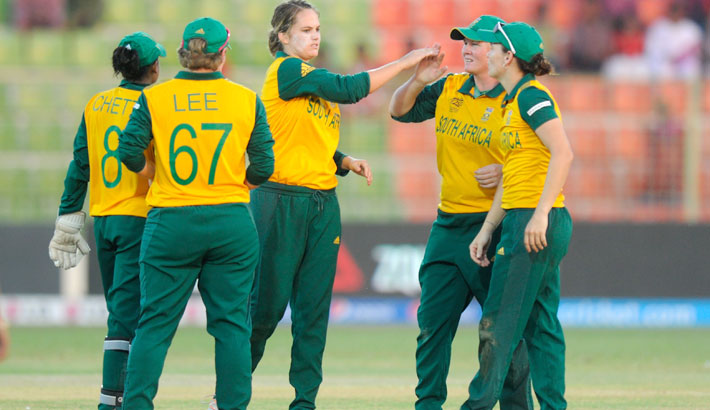 The Momentum Proteas women recovered well from their loss against Australia at the ICC World Twenty20 when they beat Ireland by 86 runs at Sylhet in Bangladesh on Saturday. Bowlers Shabnim Ismail and Dané van Niekerk returned outstanding figures of 3/5 and 3/10 respectively to lead their side to a commanding win.

The Proteas posted 165/5 at the end of their innings after winning the toss and opting to bat first. Openers, Lizelle Lee (43 off 40 balls) and van Niekerk (25 off 35 balls), provided a solid foundation with their 57-run partnership.

The Irish bowlers did well to stem the flow of runs, restricting Marizanne Kapp and Mignon du Preez to 18 and 14 respectively, but could do nothing to stop Chloe Tryon (35*) and Suné Luus’ (29*) unbeaten 63-run partnership to take their side to a strong finish.

In reply, Ireland could only manage 79 runs before they were bowled out at the start of the 16th over. Marcia Letsoalo claimed two more wickets to add to Ismail and Van Niekerk’s combined six, to put a stranglehold on Ireland for the win.

SA coach, Hilton Moreeng, was satisfied with the way the team performed. “It was wonderful to see such a good fight back from the team today,” he said.

“It’s always difficult to bounce back after a loss having played so well against a team like Australia. I’m very proud of their professionalism and character during this match, the batters did so well up front to set us up and our bowlers were just exceptional.”

South Africa will play their last Group A match against New Zealand on Monday, 31 March. They are back to third place on the log behind the White Ferns (New Zealand) in second in Group A’s log, led by Australia’s Southern Stars.

Photo 1 caption: Dane van Niekerk celebrates the key wicket of Isobel Joyce, during the Momentum Proteas’ 86-run win over Ireland at the ICC Women’s World Twenty20 match against Ireland at the Sylhet International Cricket Stadium, on Saturday, 29 March, 2014, in Sylhet, Bangladesh. The South Africans compiled 165 in their 20 overs, before bowling out Ireland for 79 runs. Photo: Pal Pillai-IDI/IDI/Getty Images