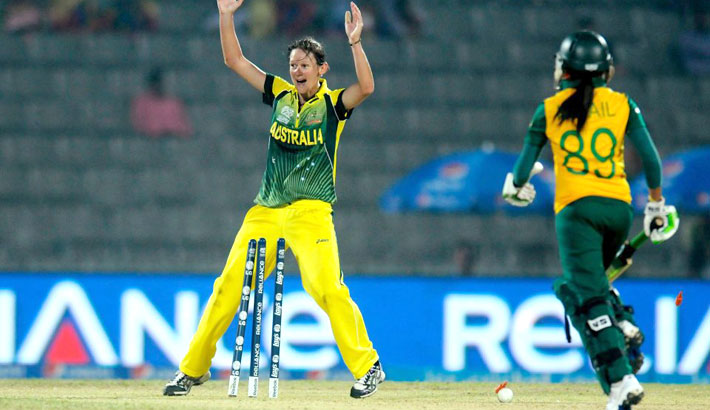 “We hope that this match has shown the world the talent that is in this squad and that, with a little bit more competitive international match exposure, we can and will go even further as a team and a country,” said the SA skipper.

South Africa did not have as strong a display with the bat as they did in their first match against Pakistan, managing only 115/9 at the end of their innings, after having won the toss and opting to bat first.

Trisha Chetty (30) was the highest run scorer as the result of a rampant performance by the Australian bowlers. Julie Hunter, René Ferrell and Erin Osborne took two wickets each to rip the South African batting order apart.

In return, South Africa took two early wickets when Alyssa Healy was run out by Sunette Loubser without scoring in the first over of the innings and skipper, Meg Lanning, was bowled by Shabnim Ismail for six in the third. Delissa Kimmince (17) was bowled by Loubser in the eighth over and Alex Blackwell’s 24-run innings came to a crashing end when she was run out as well, this time by Marizanne Kapp.

Australia were 56/4 at the start of the 12th over but were carried home by the unbeaten 60-run partnership between Ellyse Perry (41*) and Jess Cameron (27*).

South Africa’s bowling was their best in a long while, conceding just a single run in extras. Du Preez, was disappointed with the result but proud of the fight and grit shown by her troops.

“It was our toughest game in a very long while,” she said. “But the heart and determination shown by the team when we were fielding was second to none. Every player put 100 percent into this game and I could tell that the Aussies were given a bit of a surprise in facing us the way we played.

“We pride ourselves in our fielding and today the team showed just what quality fielders we have.  Ultimately, though, their superior match experience won the game for them,” said Du Preez.

“We did not have enough runs on the board to defend and they took advantage of that in the end. Full credit to them and the way Perry and Cameron managed to pull their side back on to a winning track after a shaky start.”

South Africa now look ahead to their next match against Ireland on 29 March at the same ground. The team will have three days to rest and prepare for the match, which presents an important step in the team’s ambitions of reaching the next stage of the tournament.

They are now in second place on the Group A log, behind New Zealand. The Proteas are ahead of Australia by virtue of a superior net run rate. “I think the break will do us the world of good,” Du Preez continued.

“We’ll have a chance to recharge and regroup and refocus on the job at hand. We’re looking forward to playing Ireland, they are not new to us, we played them in a triangular series in January, and know how tough they can be, but I’m backing my team to show that famous Proteas bouncebackability.”

Photo caption: Shabnim Ismail is run out by Sarah Coyte off the bowling of Australia’s Julie Hunter, to break the Momentum Proteas’ 7th-wicket partnership with Marizanne Kapp. Chosing to bat after winning the toss, Australia limited SA to 115/9, before making the required total with 8 balls remaining. Photo: Supplied