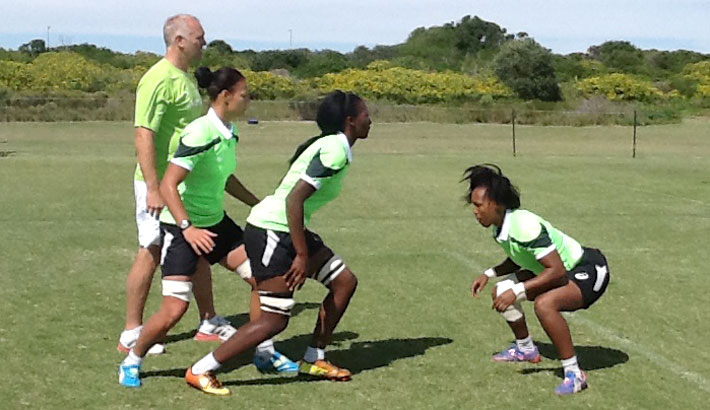 Springbok Women’s Sevens coach Renfred Dazel on Friday named his 12-member squad for the Confederation of African Rugby (CAR) Women’s Sevens tournament in Kenya next week, where the team will defend their title won in Tunisia last year.

The squad features only one change from the group that finished third at the Hong Kong Invitational last week, with speedster Phumeza Gadu, who scored two tries in their opening pool fixture against Papua New Guinea last week, ruled out due to a knee Injury.

Two other star players Nosiphiwo Goda (lower back spasm) and Veroeshka Grain (groin) were also nursing injuries this week, but they were cleared to play on Wednesday.

“It is unfortunate to lose a player with Phumeza’s experience, but this offers Rachelle an opportunity to make her presence felt,” said Dazel.

“We have a talented elite squad and each player has immense potential. The fact that the all ladies train together daily in Port Elizabeth means any player could slot in with ease, so I am pleased that Rachelle is receiving this opportunity and I am excited to see her in action.”

South Africa, who were drawn in Pool A with hosts Kenya, Senegal and Madagascar for the tournament on April 12, registered a convincing 29-5 win in the final against pool competitors Tunisia last year.

The 2013 runners-up, meanwhile, were drawn in Pool B with Uganda, Zimbabwe and Namibia.

The squad departs for Kenya on Sunday and will participate in a joint training camp with the other seven teams from Monday, April 7, to Friday, April 11, before battling it out for the top honours next week Saturday.

Dazel, meanwhile, departed for Kenya on Friday for a two-day IRB coaching course with his African counterparts before the training camp begins.

Photo caption: Members of the Springbok Women’s Sevens squad during practice in Port Elizabeth, ahead of their defence of their Confederation of African Rugby Sevens title, in Kenya next week. Photo: Supplied