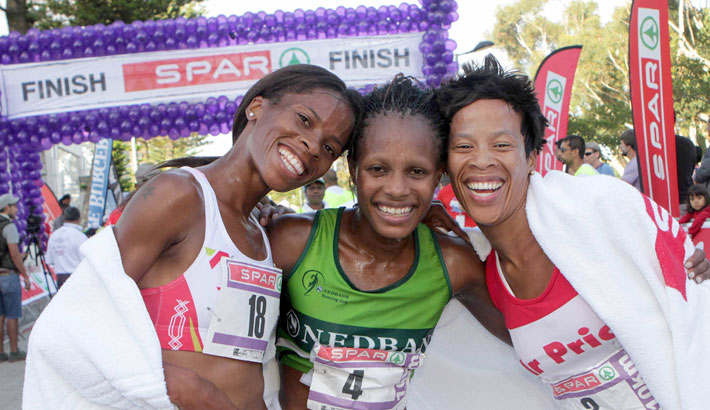 It’s that time of the year again, when South Africa’s elite road runners get ready for the first race in 2014 SPAR Women’s 10km Grand Prix – the Cape Town Challenge at Green Point on Sunday, 6 April.

The winner of the annual Grand Prix is the runner who has accumulated the most points in the five SPAR Women’s 10km Challenge races, which are held at venues around the country.

For the third year, the winner will take possession of a brand new Nissan Micra. The runner-up will receive R30 000 and the third placed athlete will win R17 500. There are cash prizes for the top 15 athletes, and there are also prizes for the different age categories.

Rene Kalmer and Mapaseka Makhanya were the first two runners to win the car, but Kalmer is the most successful Grand Prix runner so far, having won the title three times. Irvette van Zyl has won twice, and Poppy Mlambo has one Grand Prix title to her name.

Makhanya, formerly better known as a track runner, dominated the Grand Prix in 2013, winning the Durban and Pretoria races, finishing second in Cape Town, third in Port Elizabeth and 13th in Johannesburg, for a total of 105 points. Rene Kalmer finished second, with 92 points and her sister Christine took third place, with 77.

With the exception of Van Zyl, who is injured, they will all be in action in Cape Town on Sunday, but there are plenty of other runners who will be going all out to ensure that they don’t have things their own way again.

Last year’s Cape Town winner, Zimbabwean Rutendo Nyahora, is determined to defend her title, but she will have stiff opposition from two Ethiopian runners, Tadesse Shankutie and Hunduma Gemeda, who will be running in the Nedbank colours. However, because the Grand Prix is limited to South African nationals, none of these runners will be eligible to claim Grand Prix points.

Other runners who will be vying for the top spots include Jenna Challenor, Zintle Xiniwe, Myrette Filmalter, Catherine Skosana and Anna Moeketsi.

One runner who will be missing from the Cape Town race is the evergreen Grandmaster Sonja Laxton, who is still recovering from a horrific accident late last year, when she suffered multiple fractures after being struck by a car.

Laxton, who completed her 80th SPAR Challenge in the Johannesburg race in October, is making tremendous progress with her rehabilitation, and can be expected to be back on the road before the end of the year.