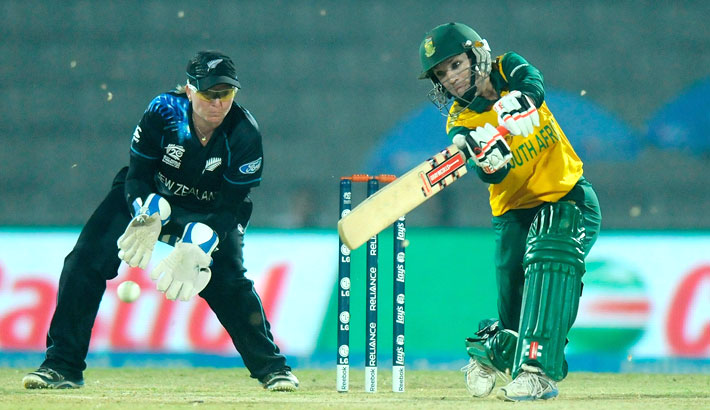 South Africa breezed into the semifinals of the ICC Women’s World Twenty20 2014 with the decision to stifle New Zealand with spin on a slow surface proving to be the difference in a five-wicket win on Monday, 31 March 2014 at the Sylhet International Cricket Stadium in Bangladesh.

New Zealand had a simple success mantra leading into its final Group A fixture: win the toss, bat first, bury the opposition under a mountain of runs, and allow the bowlers to come into their own.

But when it mattered, South Africa bucked the trend by first restricting New Zealand to 114 for 8, and then overcoming a few nerves to get past the finish line with four balls to spare, Mignon du Preez hitting a crucial 47-ball 51 to shepherd most of the chase.

That South Africa got into a position from where it could dictate terms was courtesy the spin troika of Dane van Niekerk, Sune Luus and Sunette Loubser, who conceded just 41 runs in nine overs between them. Most importantly, they picked up the vital scalps of Suzie Bates, Sara McGlashan and Katie Perkins.

That passage of play slowed New Zealand’s progress and eventually ensured it finished with a below-par total.

Things didn't go to plan last night, with South Africa beating the girls by five wickets. Their first loss of the tournament and yet…

…the girls are narrowly eliminated on Net run-rate. This one hurts.

It had started differently for New Zealand, as Bates and Sophie Devine added 35 in the Power Play overs. While Devine rolled out the fireworks early on, Bates, who had scored 167 runs in three innings at a strike-rate of over 140 prior to Monday’s match, looked unusually subdued.

With her timing nowhere near her best, the frustration of not being allowed to break free resulted in her downfall when Bates drove van Niekerk, the legspinner, straight to cover point to break the 41-run opening stand.

It was just the start of a long batting line-up, as South Africa ran into the experienced McGlashan. But Luus and Loubser stuck to tight lines to frustrate New Zealand. In a six-over period following Bates’s dismissal, New Zealand managed just two boundaries, but it wasn’t as if the runs had dried out completely. At 70 for 1 in the 13th over, it had set itself up for an onslaught at the death.

South Africa grew edgy, but against the run of play came a wicket to once again give hope. McGlashan lofted Luus hoping it would clear the infield, only to find van Niekerk leaping in the air and pulling off a one-handed stunner at mid-on.

Perkins missed an attempted sweep to be trapped plumb in front in the 15th over, and three balls later, Devine holed out to long-on for 40 to leave New Zealand in trouble at 83 for 4. The lower order went down swinging and managed to add 31 more, but South Africa held the aces at the halfway mark.

That confidence rubbed off on the openers who came out all guns blazing. Lizelle Lee’s first scoring shot was a superbly carved six over extra cover in the first over, while van Niekerk played a delightful straight drive off the next.

But Morna Nielsen had the last laugh when Lee was bowled playing outside the line of a quicker delivery in the third over.

Devine made it a double delight for New Zealand when she dismissed Trisha Chetty, but van Niekerk wasn’t going to throw in the towel without a fight, even if it meant she had to play against her instincts. At the other end, du Preez was given a reprieve on 15, when Maddy Green put down an attempted slog sweep at deep midwicket after doing most things right in getting to the ball from the boundary.

It was a let-off that would prove costly.

From there on, there was a sense of calm, even as the asking rate escalated close to seven runs an over with 10 overs to play. New Zealand created a stir with the wicket of van Niekerk in the 11th over, but du Preez cut loose by smashing four boundaries in the next three overs.

There was another twist in store when Marizanne Kapp and du Preez were dismissed off consecutive deliveries to leave South Africa with nine to get off eight balls.

But Shandre Fritz calmed the nerves by backing away and carving a boundary over mid-off. There were four runs needed off the last over, and the target was achieved without too many difficulties, as Chloe Tyron cleared the infield to seal the win with a boundary.

In the end, it was du Preez’s knock was the icing on the cake as South Africa made it to the final four for the first time in its fourth attempt. For New Zealand, who won three out of its four matches, it was an unfortunate end to a tournament where it did most things right.

Photo 1 caption: Momentum Proteas skipper Mignon du Preez captain drives through the covers on her way to a match-winning 51 (47 balls), an innings that secured her the ICC Women’s World Twenty20 Player of the Match award in a winning effort that put the South Africans ahead of New Zealand’s White Ferns in their battle for the second of two Group A semi-final berths, at the Sylhet International Cricket Stadium on 31 March, 2014 in Sylhet, Bangladesh. Photo: Pal Pillai-IDI/IDI/Getty Images