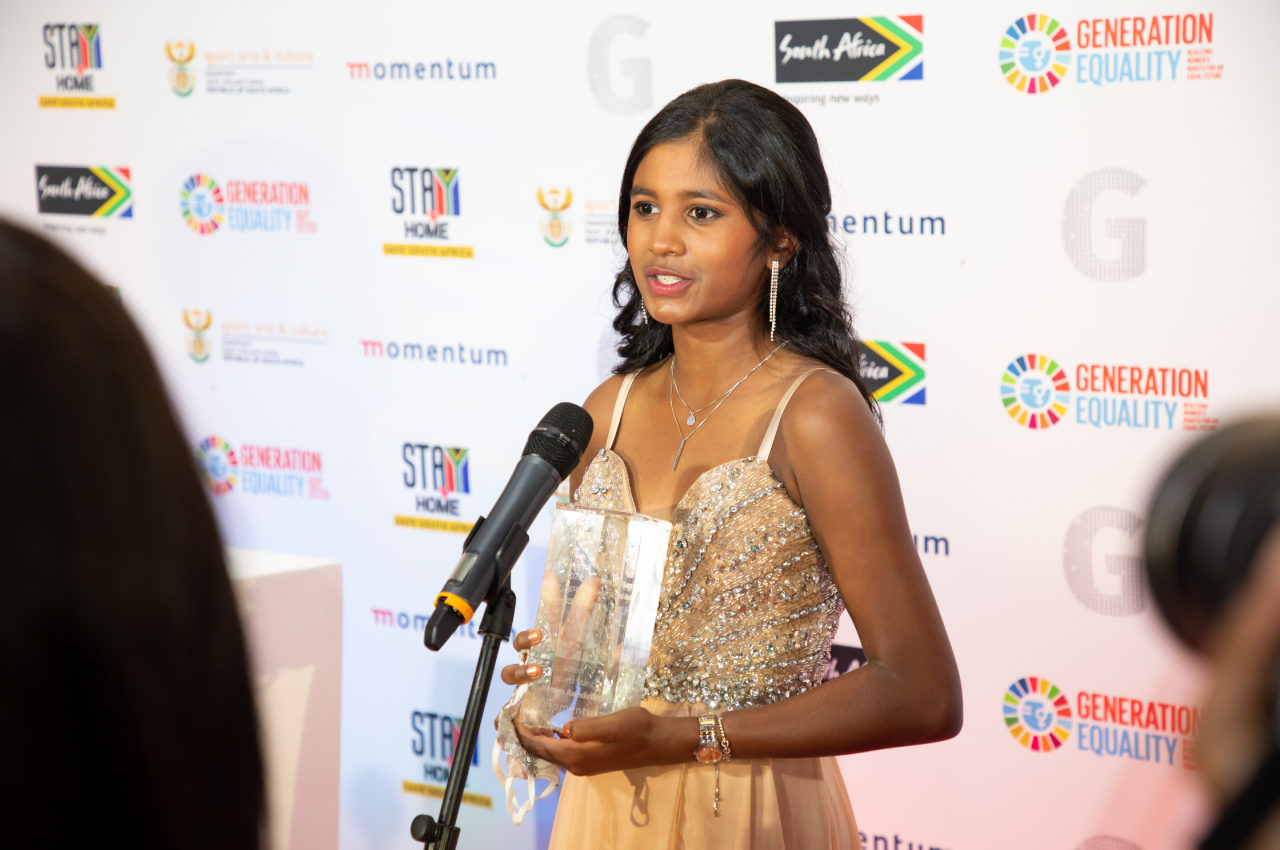 Young tennis sensation, Kaitlyn Ramduth, says winning the 2020 Momentum gsport School Sports Star award has been the highlight of her career and life.

The 14-year-old conquered a tough group of finalists to claim the award, which has given her a timely confidence boost after her playing year was curtailed because of the Covid-19 pandemic.

Ramduth was scheduled to play in several tournaments around the world before the global pandemic hit, putting a dampener on all of her goals which were set for 2020.

“I have won many matches over the years both locally and internationally but being recognised in this way for my efforts and passion as a young woman is something I will treasure forever,” she said to gsport.

She believes the award is an important stepping-stone for her young career and will give her the profile to attract more sponsors who believe in her talent.

Tennis in the country remains overshadowed by soccer, rugby and cricket in terms of profile and support, but leaders in the sport like multiple gsport winner, Kgothatso Montjane, continue to shine the light and pave the way for future generations.

The multi-talented youngster hopes her award will give youth tennis in South Africa some recognition to grow the profile which will hopefully encourage young girls to pursue a career in the sport.

Despite the tough year, the tennis ace still has her eyes set on maintaining her number one status in South Africa and gaining an illustrious World Ranking which would catapult her career to WTA heights.

She chatted to the gsport Team about the impact of winning the award, life after Covid and her hopes for youth tennis in South Africa.

What has winning the gsport School Sports Star Award meant to you?

Winning the gsport Award has been a highlight, not just in my career but in my life as well. I have won many matches over the years both locally and internationally but being recognised in this way for my efforts and passion as a young woman is something I will treasure forever.

How would you like to use the award to advance your career? And how important is the recognition?

I believe that this award is an important stepping-stone in my journey and has given my career the boost that was needed to show potential sponsors that I have amazing organisations such as gsport4girls and Momentum who believe in my talent. Being recognised in this way has boosted my morale even more and shown me that I can achieve more than I dream of. gsport4girls has shown me that dreams can come true.

How have you stayed focused on your career during lockdown?

Tennis for me is more than just a career but yes, I keep myself very disciplined even under abnormal circumstances like the lockdown because tennis is part of who I am. I don’t train just when I have to. I train because it is part of my lifestyle.

What are your aspirations when the sport is back in full swing?

Well, nothing has really changed for me. My goals are still to keep working hard, to try my best to keep winning and climbing the ladders of success to maintain my number 1 ranking. I want to keep representing South Africa, and thus work toward gaining a world ranking which is a stepping-stone for my future.

Who is your favourite player and what do you love most about them?

My favourite player is Maria Sharapova. I have studied her technique and have always admired her ambitious drive. From humble beginnings she fought hard and her perseverance in every match that I have watched of hers is truly remarkable and inspiring.

Why do you think tennis still remains a male dominated sport at junior level in South Africa and what do you think can be done for players your age to grow the interest?

I believe that Tennis was never promoted as a sport as widely as cricket, soccer and rugby but in general I feel that young women are not encouraged to pursue sporting careers. It is not always easy get ahead as a female but it’s not impossible.

Through young woman like me who are determined to push through and make my dreams a reality, I believe that other young women will see that it is possible to do the same with motivation from organisations like gsport4girls who give recognition to our achievements.

It would really be great to have more financial support from corporates and other institutions to aid in bringing more awareness and accessibility to this beautiful sport that I love.

Photo 1 Caption: Kaitlyn Ramduth pictured at the 2020 Momentum gsport Awards where she won the School Sports Star of the Year award at Vision View Productions in Johannesburg on Monday, 31 August 2020. Photo: gsport