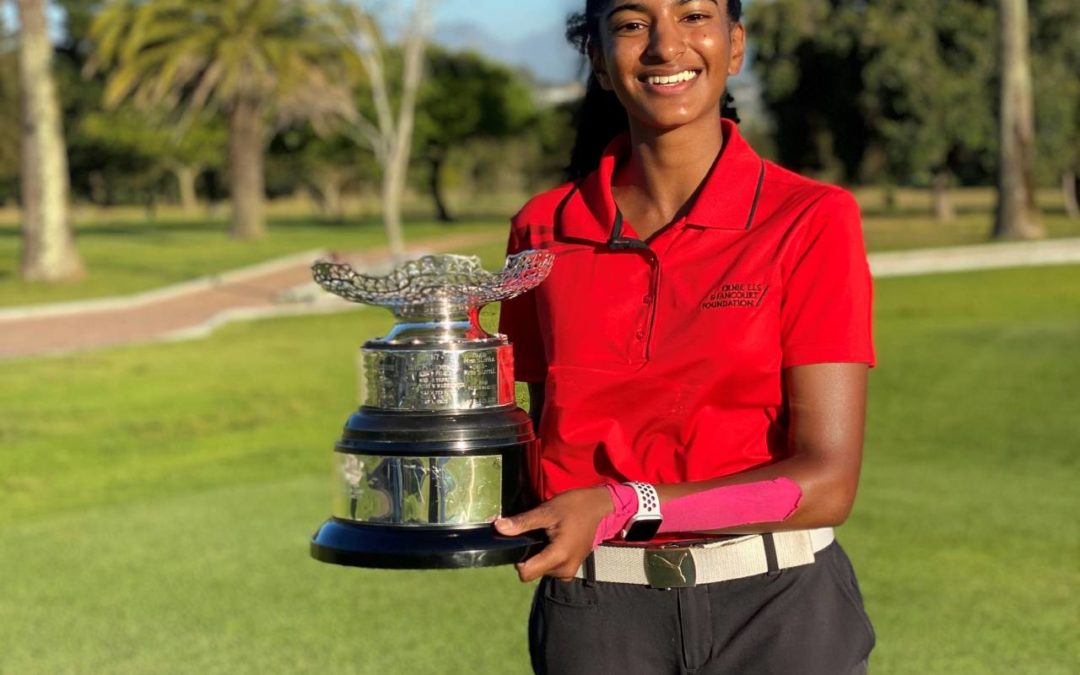 GolfRSA Elite Squad Member, Kaiyuree Moodley, is currently preparing to leave South Africa to fulfil her dreams of playing the sport in the United States of America.

In 2019, Moodley matriculated from Crawford College Lonehill and was due to take up a scholarship at the University of South Carolina in August this year, but the nationwide lockdown put paid to her plans.

“I started my first year, but I’m doing it all from home,” said the Journalism and Psychology student.

“It was disappointing, but I was grateful that I could still start my first year and that we had a backyard to practice.

“I didn’t go completely rusty, but it took me a while to find my swing again after lockdown.” – GolfRSA Elite Squad member, Kaiyuree Moodley speaks on her performance post Covid-19 lockdown.

“I constructed a net with a duvet so I could hit balls and I did a lot of chipping and gym work. And I had lessons with my coach over the internet. I didn’t go completely rusty, but it took me a while to find my swing again after lockdown.

“Playing with the pros definitely changed my mind set. I’ve become more serious about how I think about the game. We also did a psychology session with Women’s Golf South Africa in our squad camp on Zoom.

“That helped me a lot during the Western Province Women’s Championship. I’m learning how important the mental side of the game can be, especially when you’re not playing well.

“I can’t wait to start the real college experience.” – Moodley reveals her excitement of starting a new chapter in her career at University of South Carolina.

“Now that my visa has been approved so I’m hoping to leave for South Carolina in December. I can’t wait to start the real college experience.”

The GolfRSA Elite Squad member had hinted at a return to the winner’s circle with strong finishes in the two ranking events leading up to her winning performance at Durbanville Golf Club – a tie for sixth in the Ekurhuleni Women’s Open and joint third in the Ackerman Championship in October.

Moodley opened her tally with a one-under-par 71 and entered the final day at Durbanville Golf Club one shot off the pace from leader Megan Streicher. However, after turning one-under, she never looked back, signing for a 68 and finishing the week at five under.

“I made a slow start in both rounds, but unlike the first round, I putted incredibly well on the back nine in the final round.” – Moodley speaks on her performance at Durbanville Golf Club.

“I made a slow start in both rounds, but unlike the first round, I putted incredibly well on the back nine in the final round,” Moodley said.

“We faced the same windy conditions at Durbanville, but Clovelly is more protected, so you really had to plan and execute your shots well.

“I was very frustrated in the first round, because I left so many putts just short. When you’re not making birdies, it feels like the mistakes just pile on. I had a couple of double bogeys and drops but I managed to bounce back to finish under par.

“The start in the final round was equally slow. I made three birdies, but gave them all back. Megan really kept me on my toes, especially when she made an eagle on the sixth. I had to hole a long birdie putt to stay in contention.

“I didn’t know I was in the lead, so I just played to make as many birdies as possible.” – Moodley speaks on her victory at Durbanville Golf Club.

“After I bogeyed nine and 10, I took a deep breath and calmed myself down. I made a solid par on 11 and chipped in on 12 and the confidence came flooding back.

“I holed some monster putts from all over the pace. I didn’t know I was in the lead, so I just played to make as many birdies as possible.  It was a great feeling to walk off the course with a two-shot victory.”

Moodley might be slight in stature, but she packs a surprisingly strong punch and her uncanny ability to produce winning shots in tough conditions has earned the pintsized Bryanston golfer a reputation as a wind-tamer.

In 2018, Moodley upstaged some of South Africa’s best coastal amateurs to win the Southern Cape Open and the Boland Open.

“I guess I do surprise people. They don’t expect someone as small as I to do well in the wind.” – Moodley speaks on surprising people with her exceptional skills on the golf course.

In January 2019, as the wind took its toll on the cream of amateur talents in the game, Moodley soared to a tie for second in the prestigious Annika Invitational USA at the World Golf Village.

So impressed was Hall of Famer Sőrenstam that she invited the Ernie Els and Fancourt Foundation member to represent the Annika Sorenstam team in the highly-rated Major Champions Invitational, hosted by Sir Nick Faldo in early 2020.

In March, Moodley’s mad skills in the wind earned her a sought-after qualifying spot in the Sunshine Ladies Tour’s flagship event at Westlake Golf Club. The 2018 Youth Olympian held her in the strong international field and was the only amateur to survive the 36-hole cut.

“I guess I do surprise people. They don’t expect someone as small as I to do well in the wind, but I do love to play in the wind,” Moodley said.

“It’s like it takes my game to a whole different level.

“The chance to compete in the Investec SA Women’s Open was a life-changing experience. Being able to practice with someone like Nicole Garcia, who plays in Europe, and gaining insight from her was awesome.

“Watching Ashleigh Buhai and the winner Alice Hewson, who played phenomenally well, was incredible. To get a birds eye view like that of how the professionals strategize and plan and to watch their course management and execution was an amazing learning experience for me.”