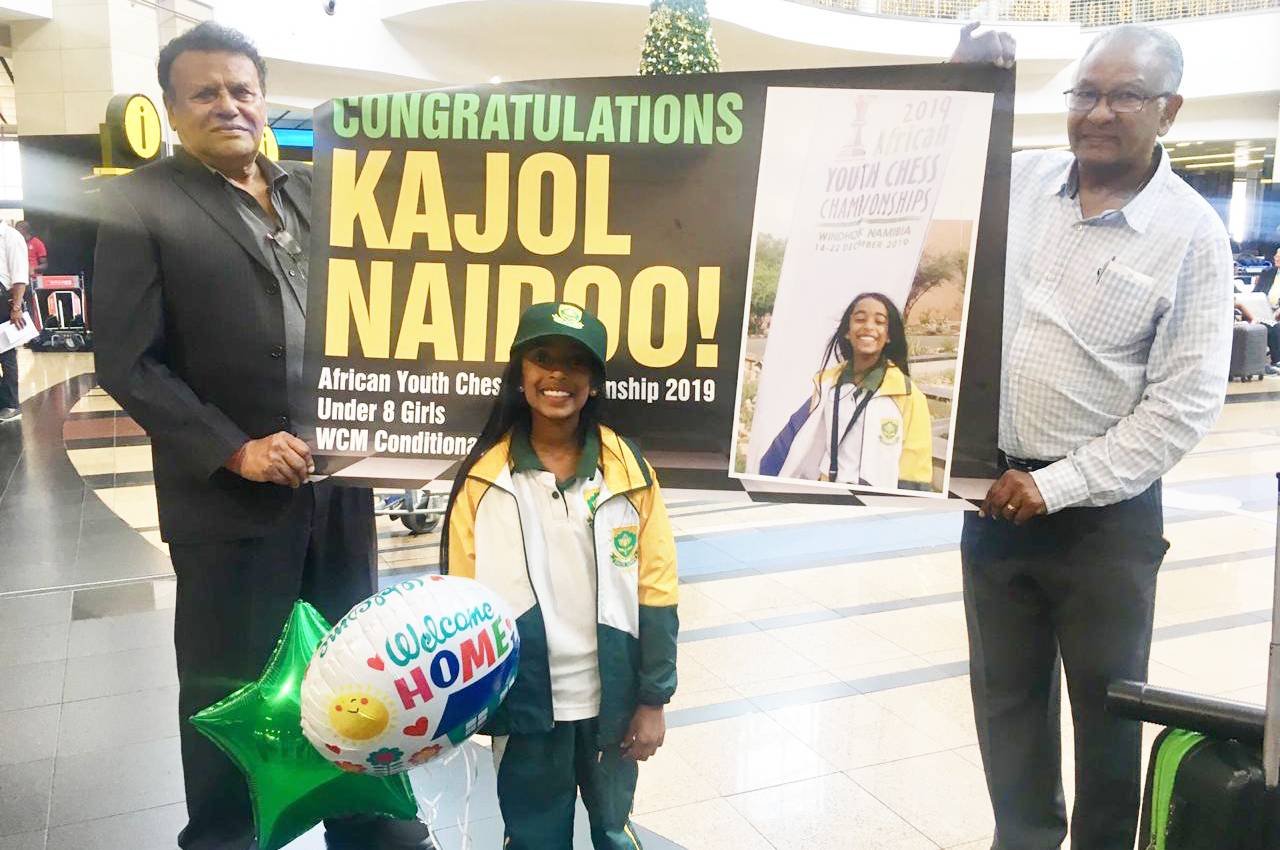 At the tender age of eight, Kajol Naidoo, is South Africa’s youngest chess champion who has a list of accolades that many twice her age can only dream of achieving. Recently, the young Naidoo who hails from Johannesburg earned a gold medal at the African Youth Chess Championship in Windhoek, Namibia, proving that she is eager to take on the world with her outstanding chess skills.

The world of chess among the youth in South Africa has grown in leaps and bounds over the years as we have seen many youngsters growing fond of the board game. Most notably, at the 2019 Momentum gsport Awards, eight-year-old chess-whiz, Minentle Miya, earned herself the School Sports Star of the Year accolade for her attributes at various chess tournaments around the world and Naidoo has proven that she, too, is a future star.

Having received her South African National colours in March, Naidoo showcased her talents in India at the Commonwealth Games as well as the World Cadets Chess Championship in China this year, and then finished off the year at the African Youth Chess Championships in Windhoek which took place from the 14th to the 22nd of December 2019.

Speaking to gsport Vacation Reporter Venice Ditshego, the talented star chats about her love for chess and her plans to take her career to another level in 2020, while her father, Mr Gerard Naidoo explains why he feels chess should be added into the South African school curriculum.

At what age did you start playing chess and who helped you understand the game?

“I was three-years-old. My dad showed me the basics but with lots of practice and with the help of my coach Craig (Bornheim) I got to where I am now.”

What makes you love chess more than the other sport?

“I love that it allows me to think. I get to use my mind a lot.”

You played in India at the Commonwealth Games and received your South African National Colours in March this year. How was the experience for you?

“When I won my colours, I was very happy. Even though I didn’t win (in India) I felt happy. I know if I don’t win, I learn.”

How much did you prepare for the tournaments?

“I had to play every Saturday practicing for the tournament and ended up playing 200 games just before the tournament. I also make sure I eat healthy and get enough sleep. I eat food such as bananas, mangos and drink lots of water.’’

What does these wins mean for your career and how do you plan to use it to power your way forward in 2020?

“It means a lot for my career and it makes me push harder so that I can enhance my career.’’

How do you feel about flying the flag for South Africa?

What is your advice to young chess hopefuls?

“Have goals, follow them until your dream is complete.”

Having his say on how chess in other countries are a part of young kids’ livelihood and school curriculum, Mr Naidoo pointed this out, “It gets children to learn so many skills, it’s not just the mental, but also a general outlook on life.

“I would also like to tell our educators out there, why not include chess in our schools. To build the skill in our schools, even parents can buy the chess board and teach our kids how the game works.”

Photo 2 Caption: Kajol Naidoo smiles while in action on the chess board. Photo: Supplied