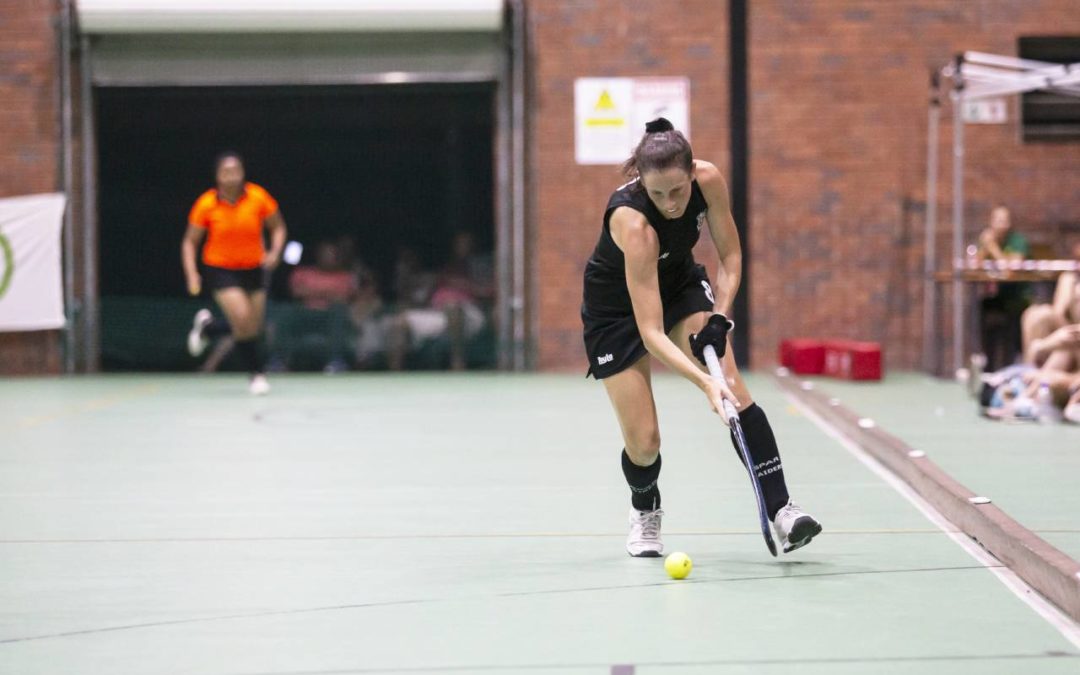 In a frenzy of fabulous skills, the SPAR KZN Raiders took the top honours in the 2020 Indoor Hockey Inter-Provincial Tournament held at Danville Park Girls’ High School which concluded on Saturday 14 March 2020.

From their very first game, the local team that has featured in the gold / silver medal game every year for the last decade, looked unstoppable. And in the main game of the tournament, their focus and determination were no different. They met a young Western Province team who had to dig deep in their path to the finals. This was Provinces first appearance in two decades in an IPT indoor final.

Leading from the front, Cindy Hack wasted no time to reveal her teams’ intentions when she took Raiders first aim at the Province goals with a mere 26 seconds of play under the belt. A desperate save from the hard-working keeper, Serage Maboloke stopped the ball and an alert defender mopped up the attack by swiftly clearing the ball from danger.

After 2 and a half minutes of play, Raiders earned their first penalty corner where Hack sent a short ball to Kelly Reed who returned the ball to Hack on the line. A savvy defender charged out to mark Hack but unfortunately for Province, infringed play giving Raiders another take at the penalty corner. The second set piece went straight to the top of the circle where an on-song Jessica Lardant fired in her flick with brute force netting the first goal.

The remainder of the first half saw KZN dominate play with superb combinations keeping them in the Province half but the visitors didn’t allow any more goals in. Two minutes into the second half, goal scorer Lardant got into space on the right, taking the ball up she passed to Reed who was in the middle of the circle. Reed calmly slotted in goal number two for Raiders. This opened the flood gates for KZN.

Tegan Fourie was meters from the goal mouth and tried to pierce the defence but second half keeper, Nicole La Fleur stood firm. The rebound fell favourably for Fourie who turned her back to the keeper with the ball nestled on her reverse stick side. She swiftly surprised everyone when she zapped in a reverse flick from a tight angle, scoring and going 3 nil up.

Soon after, Reed was in the action again when she knocked in her team’s fourth and her second. The action swiveled between the two goals with Province taking only a few shots at the KZN posts. Midway through the final quarter, Hack was unmarked and able to spin and slot in her second goal taking the score line up to 5 nil. Ammaarah Hendricks for Province had a pearler of a chance, rounding keeper Zimisele Shange and sending the ball in only to have the dreaded whistle blow with the news that her efforts were disallowed.

Responding to the Province break, KZN took the action quickly down the sideline and rounding expertly into circle, passing the ball to a shadowing player in the hopes of more goals. 90 seconds remaining on the clock, this tested move paid off with Reed bolting down the right. From the distant right corner she sent a ball searching for Hack who was waiting on the goal line and very easily netted the final goal.

Western Province used up all their magic in the semi-final to get to the final where they just ran out of steam going down 6 nil to an impressive SPAR KZN Raiders team.

After the game, captain Hack proudly stated, “I’m absolutely thrilled and so proud of my team! After a long build up and preparation all the hard work paid off and each-and-every girl stepped up. We always knew Western Province were going to be tough as we had previously lost to them in our build up phase, but we just clicked and were solid, clinical and played incredible hockey. Just a proud captain!”

Head Coach, Calvin Price added, “Fantastic final for the SPAR KZN Raiders. When it counted the ladies stepped up and showed their class. Not only scoring some amazing goals but for indoor to have a clean sheet, is a big achievement and to have one in a final is even more special. Well done to the team. Well deserved!”

At the Prize Giving, Kelly Reed was acknowledged as the Player of the Tournament. Other individual awards went to Tamlyn Kock from Southern Gauteng for Most Promising Player. The jack in the box – Charlize Swanepoel for Goalkeeper of the Tournament. And Kayla de Waal from Western Province for Top Goal Scorer.

During the four days of fierce action, a group of selectors sat watching the players every move. In the coming weeks, South African Hockey will make an announcement congratulating the successful players who will go on to represent their country in the upcoming World Cup.

Photo 1 Caption: Player of the Tournament, Kelly Reed finds herself in some space during an attack against Western Province in the 2020 Indoor Hockey Inter-Provincial Tournament held at Danville Park Girls’ High School. Photo: Rogan Ward