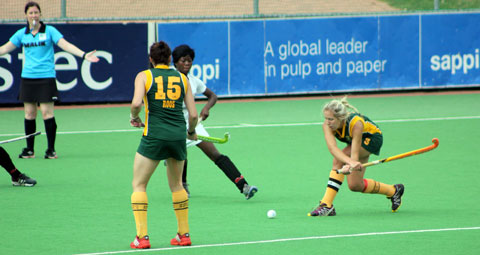 The South African Under-21 women’s hockey team won the final of the Junior World Cup Africa Qualifier Tournament with a 4-0 win over a spirited Ghana after leading 2-0 at half-time at Randburg Hockey Stadium Saturday.

Captain Izelle Lategan (2), Lilian du Plessis and Christine Roos scored the goals in a match where umpires Lia Waine (England) and Aisling Keogh (Ireland) weren’t the most popular people with the coaches. The tussle for possession of the ball was fiercely contested and clashes of sticks and bodies a frequent occurrence.

Lategan was the tournament’s top goalscorer with a total of 7, while Du Plessis with six took second place.

In the third minute, the first penalty corner saw SA slip the ball right and Demi du Toit’s well-struck shot was pulled off the line by Emelia Fosuaa.

Ghana survived the second PC after an intricate SA variation, but in the eighth minute the fourth penalty corner of the final saw Du Plessis open the scoring with a low flick (1-0).

Centre back Du Toit made a crucial tackle at the other end as Martha Sarfoa threatened, while SA needed to up their ball speed when in possession as the Ghanaians were closing down space in their own half.

Midway, Tanya Britz had to be helped off after a clash of bodies – the striker didn’t return – before Nicole Walraven made a critical tackle when Ghana had numbers after turning the ball over.

In general, SA were struggling to unlock the Ghanaians’ defensive structure but the opportunities did come, and in the 20th minute Du Plessis flicked the ball back to Nicole Kemp, whose slap shot flew over the crossbar.

Shortly after, Roos, Quanita Bobbs and Du Plessis combined beautifully down the right but the latter’s accurate cross wasn’t latched on to by other supporting players.

Five minutes from half-time Erin Hunter, Quanita Bobbs and Tiffany Jones got it together down the right for Lategan to provide the finish (2-0).

Changing over with a 2-0 lead, SA came out playing a high-pressure game but when the counter-attack presented itself those upfront were not leading with explosivity and a promising attack or two amounted to nothing.

Eventually right-half Erin Hunter fed Kaila Flemming and the pass was finished off by Lategan to make it 3-0 in the 48th minute.

A better side would have made SA pay on a number of occasions in this final.

SA came back strongly with a number of goal shots, including a seventh and eighth PC. The pressure had to tell and Roos increased the winning margin from field play seven minutes from time (4-0).