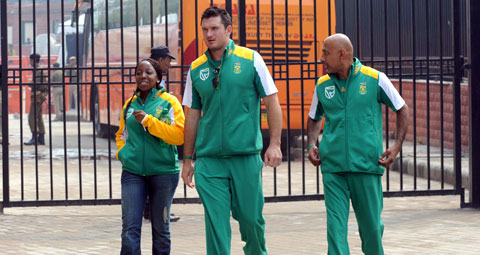 The Proteas men’s cricket team is about to kick off an exciting Test series against England. And at the forefront of their media machine is none other than cricket nut Lerato Malekutu. Lerato has been in the role of Proteas media officer since October 2010 and she is more in love with her job than ever before.

From liaising with the media to briefing players, setting up press conferences and communicating on social media, Lerato does it all. This media-savvy young South African is a wonderful example of how following your dream, through the good times and bad, ultimately pays off.

Speaking ahead of the first Test at the Oval, Lerato reflects on the last five years since she was first featured on gsport.

The 2011 gsport Woman in Media finalist also shares key insights on working in a male dominated environment and how she has learned to toughen up.

If you have encountered her already, meet the Proteas number one lady, Lerato Malekutu.

Lerato, you have come a long way since gsport first featured you in 2007, recap what has happened in the last five years.

The last five years have been an incredible journey. I actually can’t believe the time has gone by so quickly. I completed my journalism degree at the University of Johannesburg and I was fortunate enough to get an internship at Cricket South Africa straight after completing my studies.

The internship was a lot of work, I gave up all of my weekends and free time for cricket but the weirdest thing was that it all just felt right. I was cricket obsessed and wanted to consume as much of the game as I could. I was offered the role of media officer for Cricket Development in May 2008, an area of the game I fell completely in love with.

I continued giving all of my time and resources to my job, I was completely addicted. This included covering all areas of development cricket from KFC Mini Cricket until senior amateur cricket. This gave me so much insight about grassroots development and made me realize just how far and wide the love of the game was.

It seems all of my hard work paid off because I was seconded to the national team in October 2010. I became the media officer of the national cricket team; a dream come true! As I write this, I am currently in the UK taking part in my first UK tour, an exciting challenge as I continue to push myself to new heights.

This has been an amazing rollercoaster ride, funny enough, one I have been dreaming about since I came to love this wonderful ball game.

How are you enjoying the current tour of England?

The UK is a fascinating country. There are so many diverse cultures and nationalities roaming the ever-busy streets. I’m hoping to make time to visit a few of the shopping hotspots as the tour goes on. The only disappointing part has been the weather. Some say this is the wettest UK summer in nearly 100 years.

What has been the biggest highlight of your job as Proteas media officer?

Wow highlight. I know this is a cliché but every match that I take part in almost feels like a highlight for me. A highlight because I go out there with the intention of giving my best, and I look back and think wow, what an amazing experience.

What other highlights have there been?

It was special to meet the President of the country Jacob Zuma before the team left for the World Cup. I think also being part of the World Cup was a special moment in my career. I obviously don’t go out onto the field but it felt as if I was representing my country, which is how I see every match that I take part in.

Where are some of the places your job has taken you?

I have been fortunate enough to travel to amazing countries in the last two years. We have been to Dubai, New Zealand and probably my personal favourite, India. I enjoyed the rich cultural heritage in India, I’m also a keen Curry eater!

How do the players relate to you?

It was a bit difficult at the beginning of my tenure with the team, I’m a very shy lady so I kept in my little corner and only really spoke when I needed to. I have grown a lot in confidence in my role over the years and have formed great professional relationships as well as friendships with the players. They respect me and the job that I do, so that goes a long way in making my job a little easier.

What has been your biggest lesson?

It’s not personal, just business. I have learnt to develop a thick skin in this role. It is a high-pressure job and you sometimes find yourself in situations that almost bring you tears. I’ve learnt how to toughen up and to take each pitfall and disappointment as a positive, you can only learn from that.

What is your advice to young women who want to follow in your footsteps?

Never lose sight of the end goal. Many people will tell you that it’s not possible, that you’re too young, not tall enough, people out there always have something to say, which is why it is important to surround yourself with a good support base.

People that have your interests at heart and people that know what you are striving for. My close mentor Kass Naidoo always told me to read as much as I can. Always make sure you know as much as you can about the industry and the intricacies involved in the area you are most passionate about.

There are other women (journalists, etc) who are also on tour with you. Is it good to have some female company especially away from your friends at home?

Yes it helps a lot to have someone to chat to about nail polish and girly things but I think I have become used to being the only female on tour.

Is your goal to one day become Wisden editor still on track?

Hahaha! I think my end goal is always changing, I remember reading an article by Colin Bryden covering cricket somewhere in the world and I thought to myself; I wish I could do that. I have been blessed and have worked hard enough to be doing something what I have always dreamt of doing, I’m going to savour the moment.

Wisden or being head of a respectable cricket publication is definitely something I will strive for in the future but for now my sights are set firmly on being the best media officer for the Proteas.