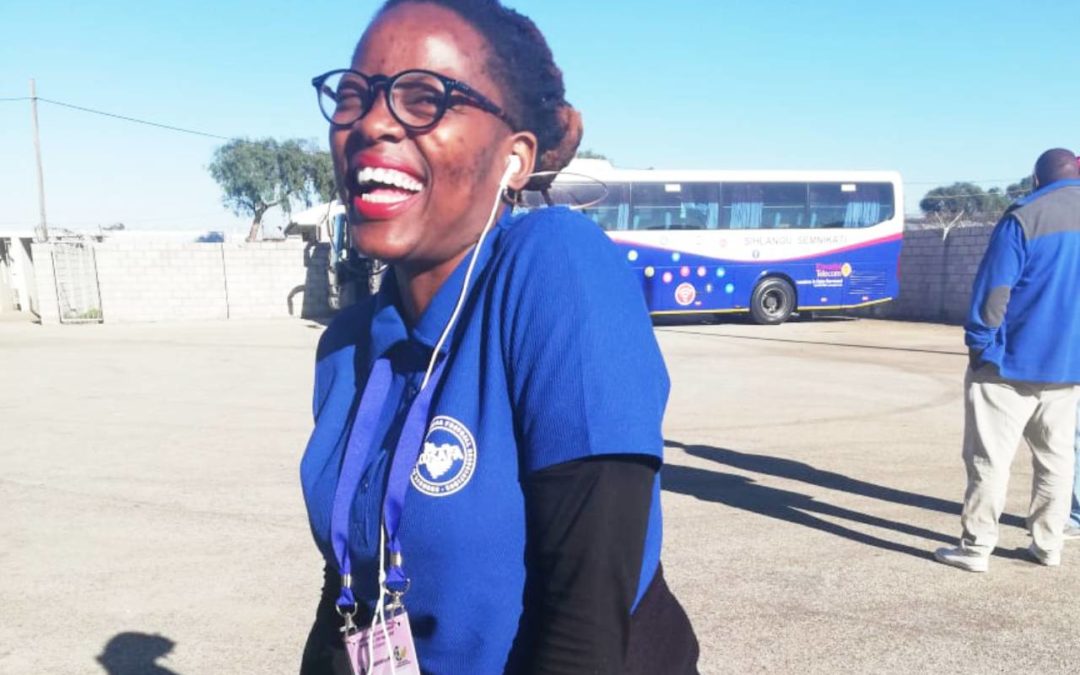 The power is with the people and we have decided to start listening more. We want to know who your women’s sport community heroes are, and whose stories should we be telling.

Last week, gsport Editor, Kass Naidoo, asked Twitter followers whose story gsport should be telling. The response was encouraging and we have picked up a few leads from the interaction.

After listening to you, and having deliberated among ourselves, we have chosen to profile rising sports journalist, Lethabo Kganyago.

Kganyago’s journey into sportmay have started late, but her drive to ensure that women succeed in male-dominated spaces has always been her priority.

Having studied Journalism, Kganyago had plans of venturing into Current Affairs, but when an opportunity arose to work in sport, she grabbed it with both hands and has never looked back.

Last year she hosted a sending off event for Limpopo-based Banyana Banyana players, who were heading to France for the FIFA World Cup to drum up support for them ahead of the showpiece event. gsport’s Celine Abrahams chats to Kganyago about her passion for sport and women empowerment.

Lethabo, please tell us about yourself and how your journey began as a Sports Journalist?

Technically, growing up I did not like sport. It is something that grew as I have been on the job. At the beginning at my first job I was hired as a gender quota when departments have to balance how many women and men they have and they didn’t have any women in their sports department, so that was how I was basically hired.

Even the interview that I went to was not for the sports department. I did understand the basics of football, but with the job I had to learn and invest in it. I would say I learned to love sports as I was developing in my work.

It was a situation of you sink or you swim, also realising what an opportunity means not just for me. If I did not do well chances of companies hiring more women after me were possibly going to be slim. So, realising the opportunity for addressing, transformation and realising that it was going to be tough.

I studied Journalism and I thought I was going to be a Current Affairs writer or a mid-morning radio presenter, but nothing sports related. When this came up it was an opportunity to say that if I didn’t do well here whether I like what I’m doing or not, women are not going to thrive in this area, so I had to do well.

I was not going to sink. I educated myself from buying the most basics that when I look at them now I laugh; things that tell you what is a whistle, what is a referee, that is how I started and I watched every match, literally I changed my life for a good six months in 2009.

Being a female in a male-dominated space is already a challenge even more so when you had to train yourself on the job. How did your colleagues react?

I have a strong character. My former Editor who trained me on the job knew that it was going to be tough, but he knew that I was determined to do the job. I was working with men only and they were giving me support and encouragement. Sometimes they would give hard criticism that sometimes would make me question what I was doing but I pushed myself to learn everything that I could possibly learn in different sporting codes. I do not think I would have made it this far had it not been for their support.

What has been the biggest challenge have you endured along the way?

It remains the biggest problem even today and that is freedom of speech. Everything that has happened to women, the injustices that happen daily has been happening ever since I arrived on the scene in 2009 and happened when the likes of Carol Tshabalala was arriving in the game. I feel our biggest challenge is we are not afforded freedom of speech.

How many women have you read about when they try to speak up and that has come back to haunt them and their careers? We get victimised one way or another. There are times when we want to interview certain female athletes, but we must wait for them to retire to be able to speak freely.

Until we can freely speak, a lot of things in women’s sport is not going to change.

Apart from the negatives, what has been the positive aspects in terms of women’s sport in the past year?

The last year has been amazing. The SPAR Proteas going to the Vitality Netball World Cup, Banyana Banyana (FIFA Women’s World Cup), the Momentum Proteas, you name it, even our journalists. For me, especially when it comes to field journalists, the likes of Busisiwe Mokwena getting the opportunity to work at the FIFA Women’s World Cup, this opened my eyes because she is struggling with the same issues that we are experiencing but she has shown her determination to rise.

Kganyago continues as she talks about gsport creating a platform to champion women and her plans to tell more women in sport stories. Listen to the full audio interview in the slider above!

Photo 1 Caption: Lethabo Kganyago’s passion for sports might have begun in the latter stages of her life, however her drive to ensure that women succeed in male-dominated spaces remains her priority. Photo: Lethabo Kganyago