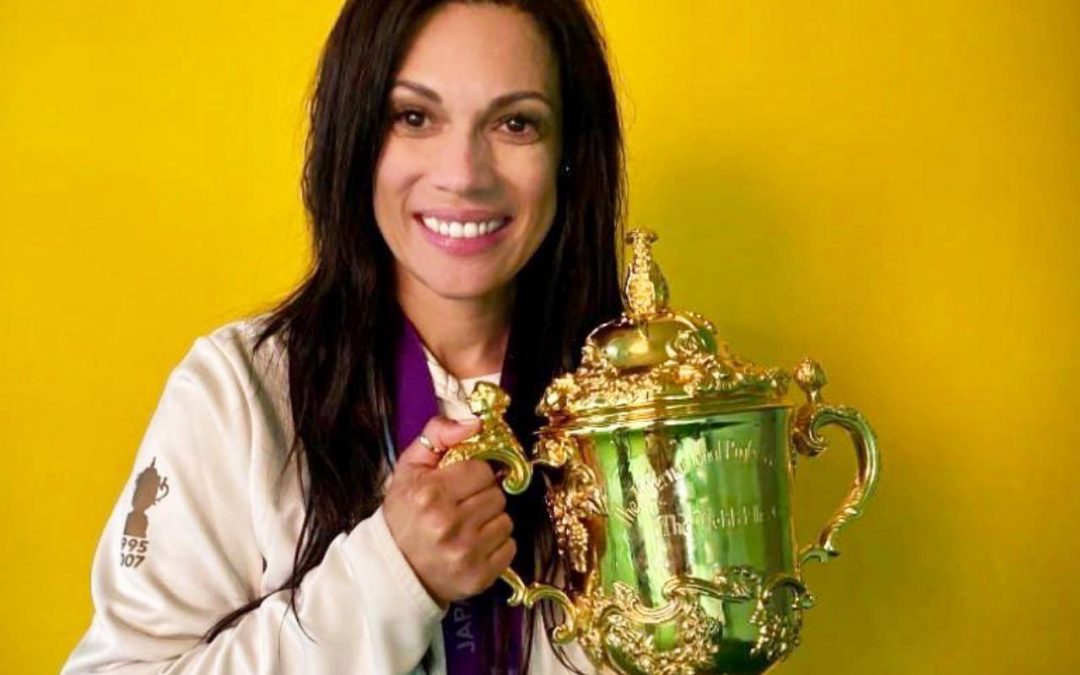 Twelve years ago, Rene Naylor broke new ground when she became the first ever female physiotherapist of the Springboks men’s team, having worked ten years before eventually receiving the call-up in 2008.

After seven years at the top of her game, and having experienced the highs and lows of the game, Naylor called it quits and retired in 2015 to focus in motherhood.

In 2018, shortly after Rassie Erasmus was appointed head coach of the men’s team, he convinced Naylor to come out of retirement and return to work in the green and gold.

A year later, she was part of the victorious team that lifted the Webb Ellis Cup at the 2019 Men’s Rugby World Cup in Japan, as Naylor’s career came full circle.

Speaking to Celine Abrahams, this boundary breaker digs deep into her journey, being a single mother in sport, a woman of colour, and how she is using her story to inspire the next generation.

Rene, where does your love for sport come from?

My love and journey started off from when I was quite young. I was about sixteen-years-old, I was attending a school on the Cape Flats in Belhar, Standard 8 (Grade 10) and I decided I wanted to pursue a career in physiotherapy.

My dad had broken his leg playing a soccer match for a church community event and he had to attend therapy and that’s when I decided this was the career that I would like to follow.

It wasn’t easy. I attended career counselling at University of Cape Town and a very disinterested middle aged gentleman who didn’t even look up from the paper that I had to fill in said that I would not be able to do physiotherapy and that I should follow a different career path, maybe food technology. I did not even know what food technology was, I had little interest in it and basically, I was too intimidated to challenge him.

My dad picked me up from UCT and on the route back home which I remember clearly, I sobbed the whole way back! I was so devastated, it was like my whole dream was crushed and I didn’t have second choice, a third, physiotherapy was my only choice.

My dad was my mentor and he believed in me. It is so important for a young person to have someone that believes in you. He believed in me and said that if I wanted to do physiotherapy then I should go and do it. He understood that it was my dream and my passion. That was powerful enough for me to decide to pursue my career in physiotherapy and I qualified in 2003.

Briefly walk us through your journey into the Springboks team.

I was lucky to get the call-up in 2008 to join the Springboks team and this was after working in rugby for almost 10 years in club rugby and then provincial rugby at Western Province.

Entering the Springboks in 2008 was an extremely high point in my career. It was the pinnacle for me besides winning the 2019 Rugby World Cup, this was the best for me. I didn’t expect it, I was working really hard at provincial level, very happy with my position there and getting that call-up was special to be part of the brand, to be part of something so big and important holds a special place for me.

However, going into that environment was quite different from what I expected. Firstly, it was not a diverse group, it was a very homogenous group of individuals in that Springboks set-up at that time. The culture was a Danie Craven era and culture where you needed to understand Danie Craven, you needed to know the name of his dog (Bliksem) to be a true Springbok which didn’t tie completely with my background and my journey. But I didn’t challenge it because there wasn’t a platform to do so. I was a young physiotherapist coming in, well not really that young (laughs) but I was a new kid on the block, I worked hard, I got stuck into it.

Being the first female physiotherapist for the Springboks and being a person of colour wasn’t my focus because I felt that the players were interested in someone that was professional and managed them well. That’s why I worked well to earn respect.

What have been your highs and lows?

If I can take you back through this journey, 2009 was a fabulous year for us. We won the Tri-Nations, we beat the All Blacks (New Zealand) in Eden, won the British-Irish Lions Tour, those were definitely highlights for me.

Then the low points were definitely the 2015 Rugby World Cup. The loss against Japan was the worst performance in the history of the Springboks and to have been part of that was painful.

Following that, I decided to take a break. My contract had come to an end, they offered me a new contract and I was in two minds, but I thought that it was time to take break and retire and focus on being a mom.

What does it mean to you to be part of a team that won the 2019 Rugby World Cup?

So, when I got the call-up in 2018 to join Rassie (Erasmus) when he took over, it was perfect timing for me. At that stage I missed rugby, I was excited about joining Rassie and his team, also the excitement about the World Cup was so big.

Going back in 2018 was powerful for me because coming back into an environment that had a completely different culture and we were now a diverse team. There was almost a level playing field, there was no hierarchy from the very first meeting.

We had the motto and the mantra that let the main things stay the main thing and the main thing was rugby and how we performed. It was an overly exciting time to join the team and then coming to the 2019 Rugby World Cup, many don’t realise that we started our preparations 614 days prior to that final match. It was not something that we planned the week before the final. We were seventh on the rankings 18 months before the final and our goal was to win the World Cup.

From the start it was about giving hope to the nation. Rassie used to have this picture up for us that still sticks in my head of a crowd watching the game and he would say to us that we are not just playing for our families, but for the nation, for those youngsters coming to watch and we knew that we weren’t able to solve all of the problems of our country but we could give hope that when things seem impossible they can be done.

This World Cup was special for us as a country and as a nation because it showed us that if we are aligned in our vision and alignment was so powerful for us, if we embrace our diversity and we respect our different paths that we’ve walked then we can achieve great things. Even now I think this is so powerful as we face COVID-19 that we as a nation are resilient, receptive, we can stand together and if we do stand together we can achieve great things.

What have been your biggest challenges in your career?

Being in rugby over 20 years and being with the Springboks since 2008 the challenges have been many. I think that the serious injury challenges, for example, Jean De Villiers having his knee dislocation in November 2010 just before the World Cup was definitely a big challenge to get him back onto the pitch for the tournament.

However, having said that I think that the biggest challenge for me has been grappling motherhood and my career, which I don’t think is unique for me it is something that most women that work in a male-dominated space would have to grapple because on the one hand you socialised as a mother, you need to be present, you need to be around and be with your child, and while motherhood is an absolute blessing, it is uniquely complicated!

And, while the rugby team celebrates family and the family unit, I do think it took some adjustment for the team to have their physio bring their baby along. My son was born in 2013 and in August that year he was eight weeks old when I returned to work with the team touring Argentina, New Zealand, Australia, with a full-time nanny and breastfeeding.

How do you plan on using your success story to encourage more women to fulfil their dreams of breaking into the sports industry?

For me it’s about storytelling and making people see that it wasn’t an easy route for me. It did take me 10 years of working in rugby, starting at the very bottom without any facilities and proper equipment to the national team, telling my story that you will get obstacles along the way and that you need to be persistent, consistent, work hard and stay focused.

What is your advice to young people who aspire to create their space in sport?

To any young person, particularly women, you are going to encounter so many obstacles on your journey but do not get discouraged, make sure you have a good mentor that believes in you and that will help you get to where you want to see yourself.

Photo 1 Caption: Rene Naylor made her first appointment at the Springboks in 2008, retired in 2015 and made a comeback in 2018 prior to the 2019 Rugby World Cup in Japan where the national team were crowned champions. Photo: Supplied
Photo 2 Caption: As the first female physiotherapist for the national rugby team and a woman of colour, it took Naylor 10 years before she eventually received her call-up in 2018. Photo: Supplied
Photo 3 Caption: After experiencing the highs and the lows, she finally called it quits and retired in 2015 to focus on motherhood. It was not long after Rassie Erasmus’ appointment as head coach who persuaded Naylor to come out of retirement and return to the Green and Gold in 2018. Photo: Supplied
Photo 4 Caption: Speaking to Celine Abrahams, Naylor digs deep into her journey, being a single mother in sport and using her story to inspire the next generation. Photo: Supplied