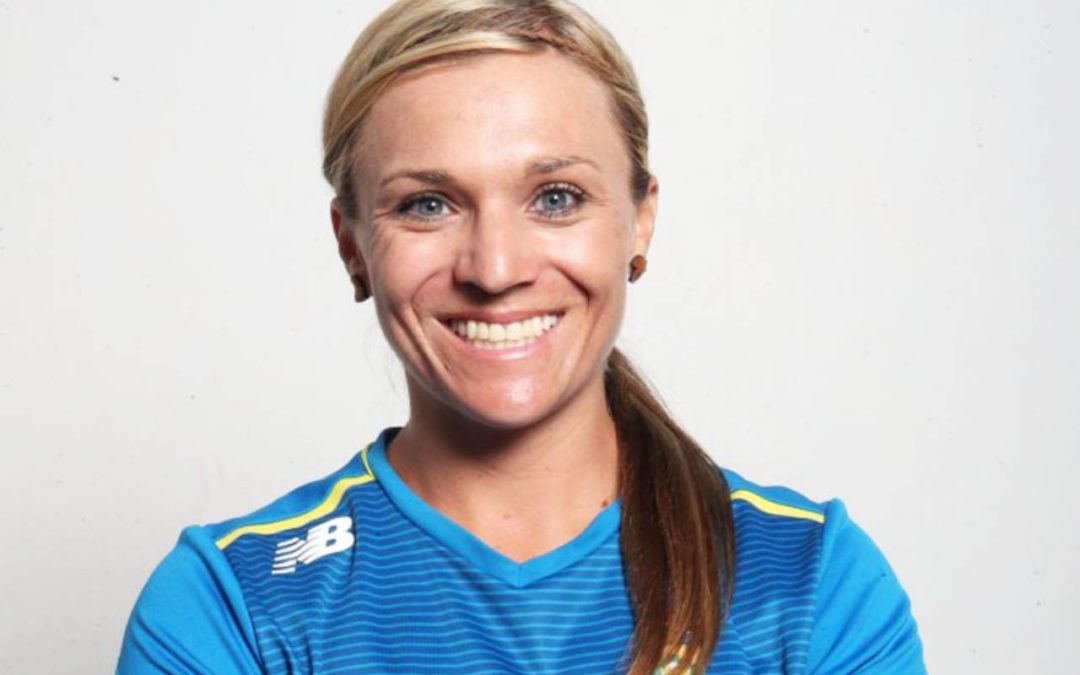 After 13 years of dedication to the Momentum Proteas team, stalwart Mignon du Preez still remains on top of her game and in the process has attracted a personal sponsor to back her journey.

Du Preez recently celebrated her 100th T20I match at the ICC Women’s T20 World Cup hitting a six and a four in consecutive balls in the final over to power her team to a thrilling six-wicket victory over England in Perth.

The seasoned campaigner has seen and done it all in cricket. But, there is a sense that she still has so much more to offer to the game, as she has been signed on as a paid brand ambassador for Aucor.

“It is a paid partnership where I have become Aucor’s brand ambassador and they have become my bat sticker sponsor,” du Preez shared to the gsport Team.

“I am extremely excited!”

It is clear to see that du Preez understands the power of her brand as she continues to partner with leading names even during COVID-19 times.

“For me it is more than just a sponsorship, it’s a brand relationship.”

“It was my 100th game and I managed to score the winning runs.” – Momentum Proteas’ Mignon du Preez on the team’s historic victory over England at the ICC Women’s T20 World Cup in Australia

Apart from managing to secure her latest deal, du Preez has also used this period during lockdown to reflect on her time at the ICC Women’s T20 World Cup 2020 and her most memorable moment.

“Definitely our opening game against England where we beat them for the first time in a World Cup campaign.

“Also, it was my 100th game and I managed to score the winning runs.”

The South African’s pulled off a promising performance on the global stage which saw the team progress to the semi-final round where they narrowly losing to Australia.

“I would say that I am still a little disappointed. Not with the whole campaign, just how it ended.

“I think for all of us we really felt that this year we were going to bring the trophy home, so all-in-all we had a really good campaign up until the last game as we didn’t play our best in the semi’s.”

“I actually really love spending time in the kitchen doing some cooking and baking.” – du Preez speaking on spending more time at home during lockdown in South Africa

The loss may still hurt, but du Preez is using this time to let her hair down during lockdown. Spending time with her husband, Tony, is rare, as she is usually on cricket tour.

“During the last year I hadn’t been at home for this long, so for us it’s a blessing in disguise. We are trying to spend quality time together and find ways to keep it fun and entertaining.”

With more time on her hands this has left the cricketer learning more about herself. “I actually really love spending time in the kitchen doing some cooking and baking.”

From a women’s perspective things are looking up for the Momentum Proteas. “Globally the women’s game is in such a healthy state and I’ve had a few discussions with Graeme Smith about what women’s cricket currently looks like in South Africa and globally and I must say that I’m super excited about these changes that he’ll implement to make sure that we cement ourselves as one of the best teams in the world.”

“I really think that with the current group of players we’ve got what it takes to win a World Cup.” – du Preez believes that the current Mometum Proteas squad can win the next ICC Women’s T20 World Cup that will be held in South Africa

As the preparations will begin for the next ICC Women’s T20 World Cup which will be hosted in South Africa, this will be the perfect opportunity to win the title on home soil.

“Well, I’m not sure if we can say we’ll bring it home because we will already be at home. I really think that with the current group of players we’ve got what it takes to win a World Cup.”

Du Preez ends off by sharing a message of support to women who are finding it difficult to focus on their dreams as lockdown in South African has been extended due to the increase of COVID-19 cases.

“Being away from sport myself these days has made me realise how we do take our opportunities for granted. For me, the biggest thing is to see this pandemic not as a stumbling block but as a steppingstone.

“Never in our life would we have this amount of time to re-energise ourselves and make sure that we come up with a game-plan to reach our dreams. Remember that if your dream doesn’t scare you, it’s not big enough. Just do your best and God will do the rest. Stay safe!”

Photo 1 Caption: Momentum Proteas cricketer, Mignon du Preez, has been part of the women’s national team for more than a decade and remains on top of her game. du Preez recently signed as brand ambassador for Aucor as a personal sponsorship for her brand. Photo: Cricket South Africa