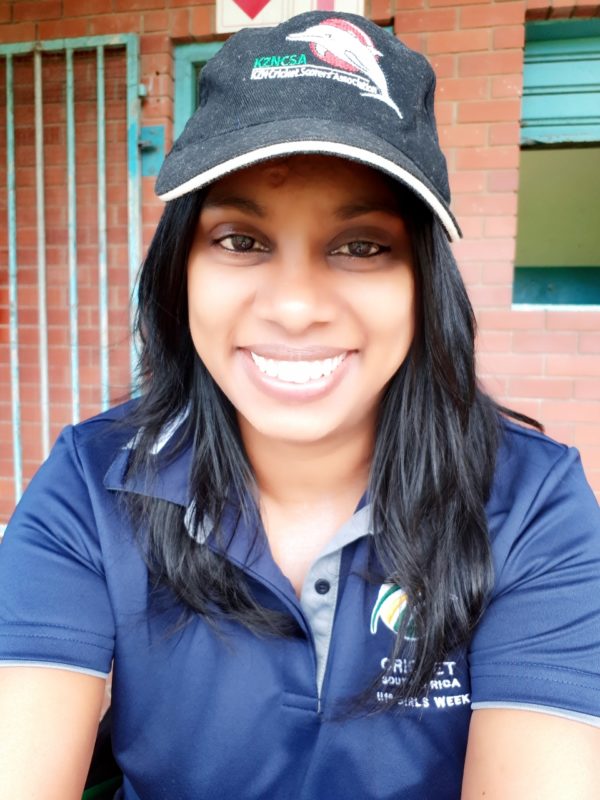 This is my account of a woman in a male-dominated sport. I think for too long women have been on the backfoot and have not been recognised for their efforts in sport. It is only in recent time, that the sporting world has taken notice of women and treated us with equal status.

‘Trust me when I say being female is one of the best and hardest positions you can ever have in life.’ – Selina Munsamy, KZN Cricket Female Scorer

What started out as a passion to be part of the sport I love turned into a dream come true. I joined the Maidstone Cricket Club as Treasurer in June 2009. In September 2009, I did the Level D Scorer’s course made up of theory and practicals. Level D is the starting level of Linear Scoring. Linear scoring is a worldwide method of scoring. It is endorsed by the International Cricket Council (ICC) and Cricket South Africa (CSA) as the only method to be used when doing Provincial, Franchise and International games on paper.

It is ball by ball scoring, which at first seems a daunting task, but once you get into it and score more games, you become better and your confidence grows. With Linear scoring, you are able to read out batsmen and bowlers figures at a glance.

After doing the course, I scored for my local cricket union and club, which is Tongaat Cricket Union and Maidstone Cricket Club. Scoring requires a lot of concentration and speed to keep up with the fast pace of the game. I did practise games for the Dolphins as part of my training in scoring.  I received my CSA accreditation in September 2012. I still remember the smile on my face when I received the email to say my accreditation was ready for pick up at Kingsmead.

Being female, you always have to work harder and smarter and those long hours you put in will eventually pay off and it did, because to achieve my Level C in scoring and gain CSA accreditation was beyond my expectations.

‘I got my first big break by being called upon to score for the KZN Girls U19 team at the CSA National Week Tournament in December 2012.’ – Selina Munsamy

It was a great week even though I had fallen ill on the 1st day of the tournament, think that was just nerves and stress and obviously sitting in 40deg heat was not good. I made new friends and I came into contact with Dinesha Devnarain (ex Protea Ladies Player) who has been my role model and my biggest champion in the world of cricket.

I came back from National Week with loads of experience and ways to improve and I was determined to go on another CSA U19 Girls National Week. I practised at every game I could get myself to at Chatsworth Oval and Kingsmead.

In between, I still had my local cricket union and club games to score and administration work to attend too. I think being female we are automatically given the gene of multitasking with a smile on our faces. I was appointed Treasurer to my Local Cricket Union, which means I became the first female to sit on the Executive Committee and I was ever so glad to be part of the union and help make a difference.

I was also appointed Mini Cricket Co-Ordinator and attended the National Mini Cricket Conference in July 2012. I met a lot of new people in the world of cricket, especially Mercia Baajties who has become a good friend.  Mercia is also another female that has helped shape my cricket career as a scorer, cause she never let me give up when things got difficult.

Scoring is a big part of my life. Family is very important to me and I also have a professional career as a bookkeeper/audit/tax consultant so to fit in so much into my schedule was a challenge, but I made it work and I am glad I never stopped.

I did two more CSA U19 Girls Tournaments, and then unfortunately my mum passed away in July 2014, and my world fell apart. I felt like I gave so much of my time to cricket, when I could have been with her whilst she was sick and so when she passed on, I literally shut down from everything and scoring and cricket itself took the biggest hit.

I resigned from my executive positions at Club and Union Levels, extracted myself from my friends and it was just work and family. My grief consumed me, and I needed to find myself again, and get myself out of the slump I went into.

Click here to read Part 2: Join Selina next week to read about how she recovered to get to where she is today, as a woman scorer and cricket co-ordinator.

Click here to read Part 3: Selina’s final instalment on her 3-part series on Life’s Success wraps in an acknowledgment of the difficulties to be faced, with thanks for her supporters, and an inspirational shout-out to women in the journey.