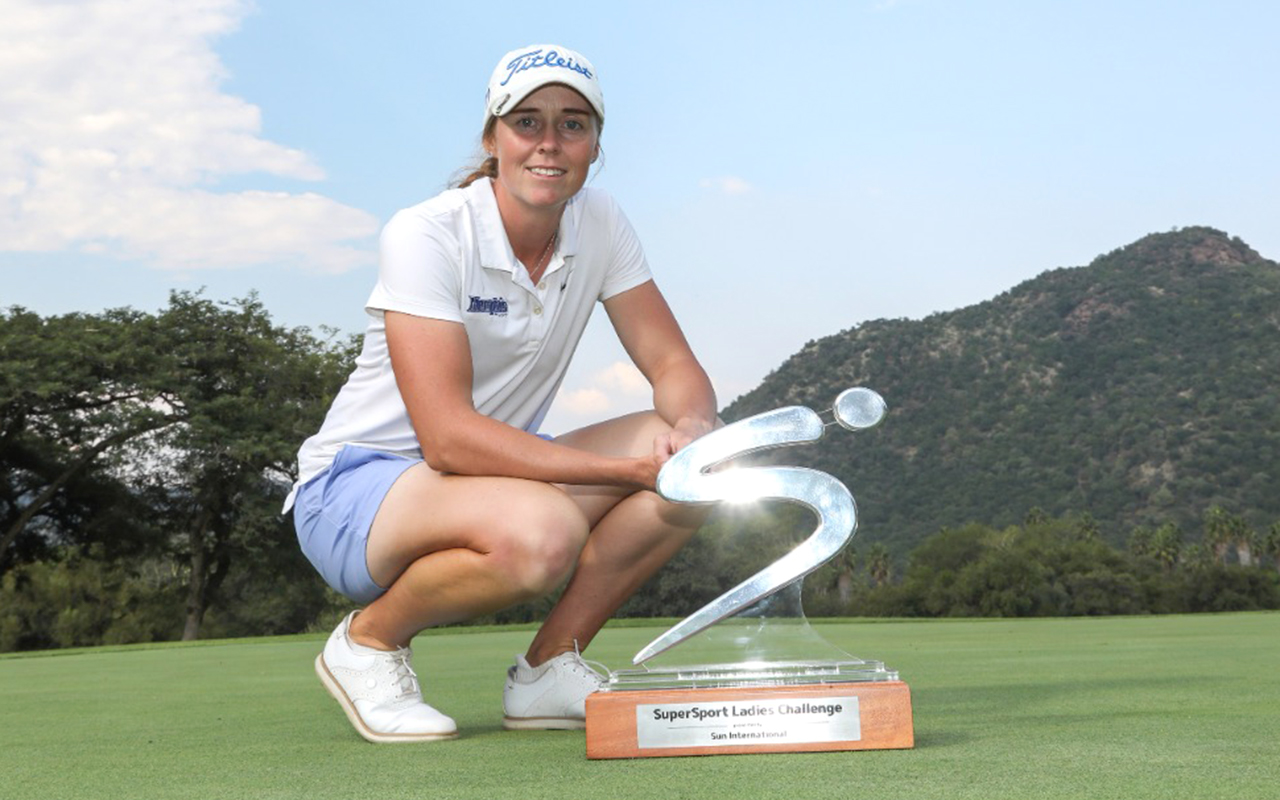 The 25-year-old Maritzburg golfer broke her professional duck in the most magnificent style at the iconic Gary Player Country Club on Friday, 23 April 2021.

A pin-seeking chip from 30 feet across the water at the par-five 18th dropped dead centre and the resulting birdie for a final round one-under 71 sealed Fletcher’s her maiden success in the SuperSport Ladies Challenge, presented by Sun International.

“First and foremost, the satisfaction of being able to play under the gun and win is amazing. Having played amateur golf most of my career, this is what I’ve dreamt of doing since I joined the pro ranks last year. I’m so thrilled with this result,” – Maiden SuperSport Ladies Open champion, Michaela Fletcher

Fletcher began the final day on four-under and triumphed one shot better, but she was pushed to the end by Nobuhle Dlamini, who shared the overnight lead, and last week’s Jabra Ladies Classic champion, amateur Caitlyn Macnab, who started the day two shots off the pace.

“Warming up on the range this morning I wasn’t really hitting it well,” said Fletcher.

“I went out there and just trusted my game plan. I knew going into the final round that Cat and Nobby are longer hitters, so it was really important that I trusted myself and my own game.”

While she couldn’t match Dlamini and Macnab’s booming drives, Fletcher edged in front and held on to pole with superb approach shots and a hot putter. The trio turned with Fletcher in front on five-under, Macnab one behind and Dlamini a further shot adrift.

Fletcher was solid with five straight pars to start the inward loop, while her playing partners traded birdies for bogeys.

Then, with four holes to play, Dlamini made three bogeys on the bounce and fell way, but Macnab pulled within a shot of her lead when Fletcher bogeyed the par four 15th hole.

“I was just really happy to watch the ball disappear down the hole.” – SuperSport Ladies Challenge winner, Michaela Fletcher.

“I knew they would both go for the green in two at the last hole and they did,” Fletcher said. “I went from not striking the ball well to striping it down the middle. I thought about going for it, but I had left myself at an awkward distance.

“So I stuck to the game plan and laid up. I had to take a longer club, though. When I got to the ball, I was so relieved that it was short of the water and I was safe.”

Her caddy offered some paternal advice and Fletcher obliged.

“My dad turned to me and said: ‘Look to make it; you can make this’. I’ve been chipping really well all three days and I caught it just perfectly. I was just really happy to watch the ball disappear down the hole.”

Macnab’s two-putt birdie for a 70 handed her second on her own at four-under. Dlamini also made a four on the closing hole and a round of 74 earned her a share of third alongside Denmark’s Linette Holmslykke, who signed for 69.

The Sunshine Ladies Tour is three-for-three with their #LevelUp campaign for the 2021 season, as Macnab and Fletcher followed in the footsteps of French golfer Manon Gidali, who claimed her first pro win in the season-opening Cape Town Ladies Open.

Fletcher was overjoyed to cross join the maiden winner’s circle.

“Things got a little hairy towards the end; the cracks in the swing showed up under pressure and I doubted myself just a bit, but I’m proud of the way I just grinded through,” said the former Memphis Tigers standout.

“At the end of the day, golf doesn’t always have to be pretty; you just have to get it in the hole. I’m happy with the way that I played under the circumstances.”

With three events to go, she hopes to raise her game to an even higher level.

“I’ve proven to myself that I really belong here. Lockdown really tested me. It was a really tough year leading up to this and I am so proud. I grinded through a really tough swing change in the lockdown, and today, I grinded my way to the win,” she said.

“When things got difficult, I never felt sorry for myself. I never gave up. I worked with what I had and won, and that is a huge confidence booster for me. My amateur days were good, but my pro days are going to be even better!”

The Sunshine Ladies Tour’s next stop is Soweto Country Club and the R500 000 Joburg Ladies Open.

The circuit then swings through the Garden Route for the Dimension Data Ladies Challenge at Fancourt, before it returns to the Mother City for the season-finale Investec South African Women’s Open, co-sanctioned with the Ladies European Tour at Westlake. The €200 000 national Open doubles up this year as one of the qualifying event for golf’s biggest Major, the U.S. Women’s Open.