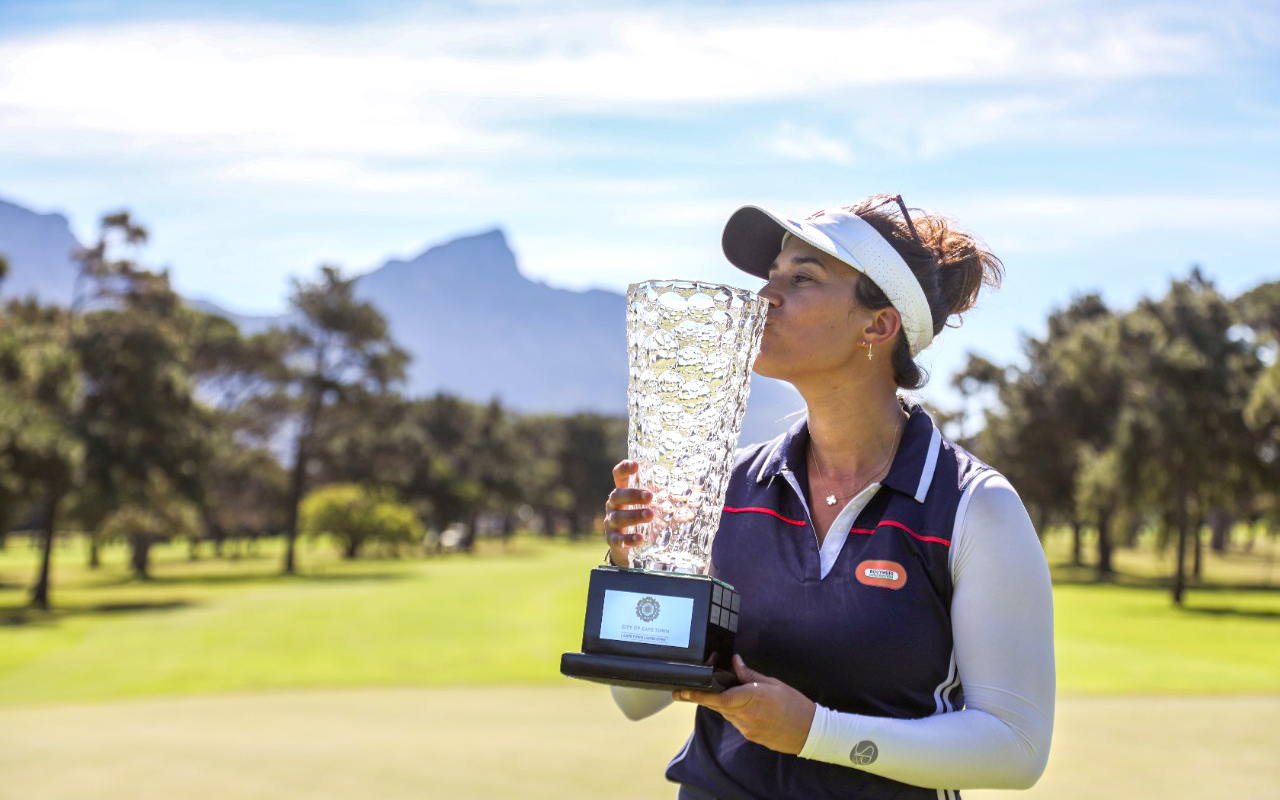 France’s Manon Gidali holed a 25-foot birdie putt on the first extra hole of the Cape Town Ladies Open to claim her maiden professional victory in the opening event of the 2021 Sunshine Ladies Tour season.

The Ladies European Tour (LET) campaigner, who started the day two shots behind leaders Cara Gorlei and amateur Caitlyn Macnab, fired a round of one-under-par 73 at Royal Cape Golf Club to finish the 54-hole event tied with local hope Gorlei on four-under-par 218.

Ultimately, it took a special putt for birdie to separate the clubhouse leaders in the ensuing sudden-death playoff.

With Gorlei having already played an exquisite bunker shot to tap-in distance for par on the second trip down the closing hole, Gidali’s inspiration came from a similar situation in the recent Qatar Open.

“I was thinking about my friend Antoine Rozner. He sank a long putt to win on the European Tour two weeks ago in Qatar and I was thinking, ‘You can do it too.’ And I made it,” said the elated Gidali.

For the 27-year-old French golfer, the victory extends an upward trend that kicked off in South Africa 12 months ago at Westlake Golf Club.

Despite starting the 2020 season with conditional status on the Ladies European Tour, the Parisian made the most of her nine starts to achieve a career-best 33rd ranking in the Race to Costa del Sol in 2020 in just ninestarts – chiefly thanks to a tie for fourth in last year’s Investec South African Women’s Open, backed up by a runner-up finish in The Saudi Ladies Team International and sixth in the Andalucia Open De Espana.

Gidali is the 13th international champion and the fourth French player to enjoy success since the Sunshine Ladies Tour launched in 2014.

In 2019, Marion Duvernay and Flora Peuch combined for victory in the Serengeti Team Championship and LET winner Anne-Lise Caudal lifted the Jabra Ladies Classic title at Glendower in 2019.

“I’ve been training hard all winter so I was really excited to come out here and play.” – French golfer, Manon Gidali

Gidali opted to play in the Sunshine Ladies Tour series in order to prepare for her first full season in Europe in 2021.

“I’ve been training hard all winter so I was really excited to come out here and play,” she said.

“It means a lot to me to get my first professional win here on the Sunshine Ladies Tour. This gives me the confidence to know that I can win and obviously the next step is to win on the LET. I’m really excited to keepplaying now.”

Reigning South African Amateur champion Macnab edged to a three-shot lead after nine holes, but she lost momentum on the back nine and slipped out of contention with a double bogey when she found the water on the par-three 15th.

A closing bogey saw the GolfRSA No. 1 finish fourth on one-under.

Congratulations to @GolfRSA No. 1 Caitlyn Macnab on claiming the Leading Amateur honours in the #sunshineladiestour's @CityofCT Ladies Open 👏👏

“That double really hurt, but I guess it was just one of those days where things weren’t working. I feel like I can take a lot of positives away from this event and it is all part of the learning process,” said the 19-year-old. “I am happy otherwise with how my game held up and how I dealt with the pressure and I’m looking forward to the rest of the season.”

Macnab won’t dwell too much on the missed opportunity, however, as the tour moves to Glendower for the next event, the Jabra Ladies Classic.

The Ekurhuleni golfer has tasted success before at the former SA Open venue, with wins in the 2020 Ekurhuleni Open and the 2019 GolfRSA Champion of Champions event.

Gorlei had mixed emotions after recording the best finish of her short professional career.

“It was awesome to be back in contention,” said the 25-year-old Arkansas University graduate, who joined the pro ranks last year. “I had lots of emotions going into today with a share of the lead, but after I made thatdouble bogey at the 10th I was five shots back of Caitlyn. I had to gather myself and concentrate on my own game and I’m proud of the way I pulled things back. Onwards and upwards from here. I have stepped it up a level already and it’s only week one. There is still a lot of golf to be played this season.”

The City of Cape Town threw its support behind the Sunshine Ladies Tour in 2015 and celebrated the seventh edition of the Cape Town Ladies Open this year. The City also extended its backing to promote and develop women sport in the Western Cape as the host of the season-ending Investec South African Women’s Open since 2018.

‘We are really thrilled to be welcoming the Sunshine Ladies Tour back to the Mother City in 2021. In a period marked by uncertainty for many sporting activities and events due to Covid-19, it is encouraging that the Sunshine Ladies Tour remains resolute in achieving its goals,’ said Mayoral Committee Member for Safety and Security, Alderman JP Smith.

“Our support of these golf tournaments goes back many years. This speaks to our commitment to enabling women’s sport, especially those aimed at developing the women’s game while also nurturing the next generation of the country’s top golfers. We have seen some progress over the years and we’re looking forward to continuing this partnership.”

The R600 000 Jabra Ladies Classic from 14-16 April offers the leading non-exempt LET player a spot in the Jabra Ladies Open – the qualifying event for the fourth Major, the Amundi Evian Championship at Evian Resort Golf Club in July.