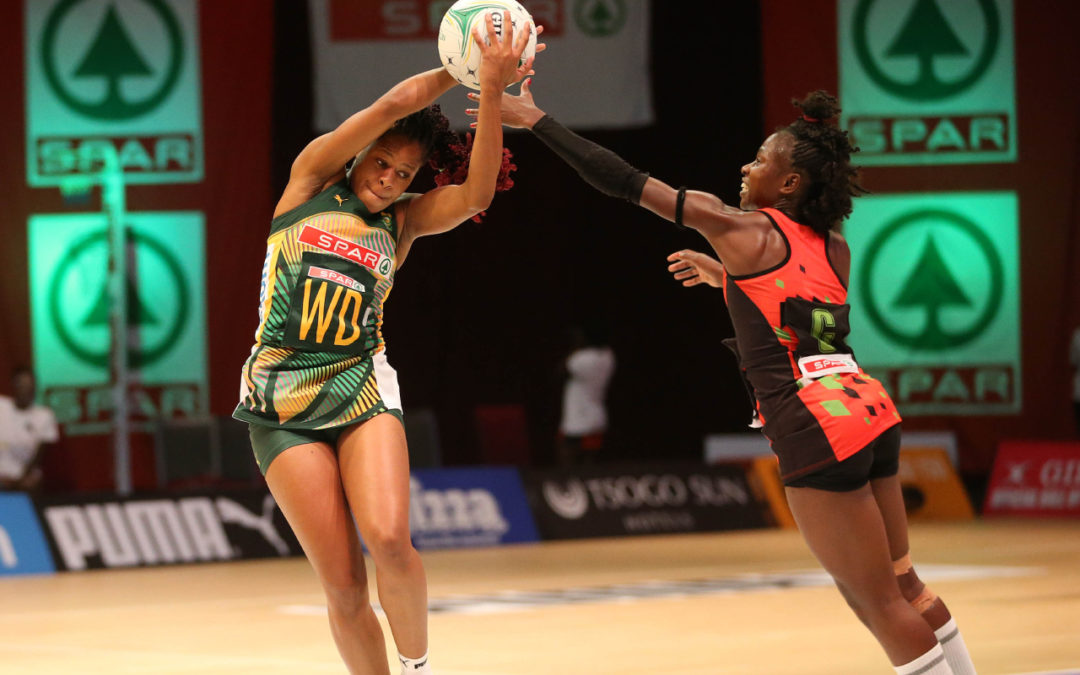 The SPAR Proteas overpowered the Malawi Queens 65-25 in the first SPAR Challenge Test match at the Superbowl in Sun City on Thursday, 26 November 2020, with two debutants putting on outstanding performances.

Tshina Mdau made her debut for the national team at wing attack and was outstanding, earning the Most Valued Player award. Mdau said she was surprised to have been named Most Valued Player after coming on in the second half of her debut match. “But it was the amazing team around me that helped me to achieve that.”

“It’s my first cap, so I didn’t know what to expect, but just going out there, I knew, I had to bring the best game we can, and they are also one of the best countries in Africa,” said Mdau. “So, expectations was zero, but yes, but I think the score doesn’t really show how tough it really was on court. Yes, I think we just all need to step up our game, both countries!”

SPAR Proteas Dominate the First Half

South Africa started as they meant to continue, with the first break coming from the fourth centre pass and from then on it was one-way traffic.

Coach Dorette Badenhorst made wholesale changes in the third quarter bringing on most of her bench.

Malawi had a slightly better start to the quarter scoring seven goals, but the SPAR Proteas responded with 17.

In the final quarter, Badenhorst brought on another debutant, 18-year-old Kamogelo Maseko, at goal attack. Maseko, who is only just out of school, promises to be a player to watch in the future.

It was Malawi’s best quarter, with nine goals to 17 for the SPAR Proteas.

“It was a great start,” said Badenhorst. “We did very well in the first quarter and that gave me the opportunity to play my whole squad.  A coach can only be happy when she had that depth of talent to work with.”

Badenhorst said the scoreline did not reflect how tough the match had been.

“It’s always tough to play Malawi,” she said. “The players worked hard for every interception.”

“It was a great match,” said SPAR Proteas captain, Bongi Msomi. “We knew what we had to do and we were able to put into practice what we had been working on in training.”

The second Test will be played at the Superbowl at 7pm on Friday, with the third being played at 1pm on Sunday afternoon. The matches will be televised live on Supersport Variety 4.

Photo 1 Caption: Tshina Mdau of the SPAR Proteas and Lwazi Takondwa of Malawi in acting during the SPAR Challenge. The SPAR Proteas beat Malawi 65 – 25 in the first of three netball test matches played on Thursday at the Sun City, Superbowl in North West Province.