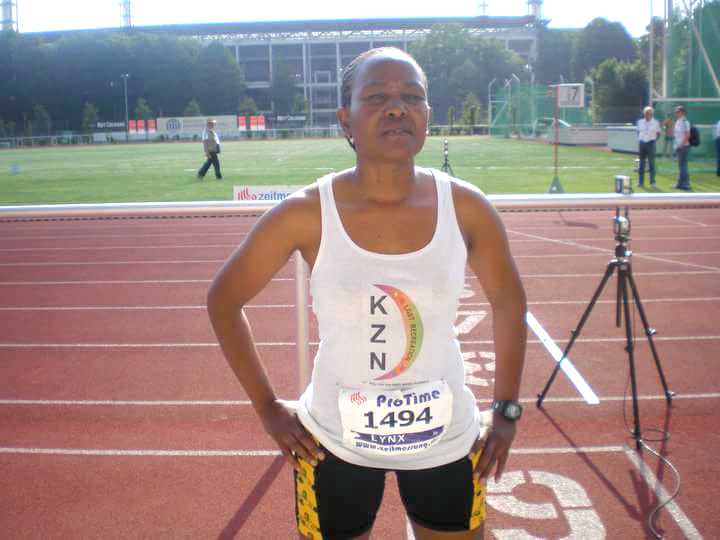 My name is Hlengiwe Buthelezi. I am a middle distance runner from Durban. I have just returned from competing in Track and Field competitions in Paris.

I do think my news will hold your attention and interest as this is also Women’s month.

Search for the hero inside yourself! Not even the sky is your limit in reaching for your dreams. Hard work, determination and action. – Gay Games Middle Distance Runner Hlengiwe Buthelezi

Alongside participating in the Gay Games, I have founded a LGBTI organisation to fight homophobia in SA, using sport as a unifying factor.

My message for Women’s Month is follow your passion and act right now! – Hlengiwe Buthelezi

The KZN LGBT Recreation organisation was founded in 2009 (Sport and Art). In 2015 KZN LGBT established the AfroGames as one of its projects, in line with its mission and vision.

The AfroGames will be held in December 2018 at KZN LGBT Recreation partner, the University of KwaZulu-Natal. This is my way of ploughing back to the LGBT community, and women at large in South Africa.

My greatest ambition is to advocate for Human Rights, especially women and youth, and to increase gender parity in terms of sports participation. – Hlengiwe Buthelezi

I draw a lot of inspiration from women like Kass Naidoo, Blanche Moila and Helen Lucre in keeping the Sport flame alive among South African women.

Last, but not least, while in Paris I was elected onto the Board of Directors of the Federation of Gay Games (FGG). I am the first African and South African in the history of Gay Games to be a Board member.

Photo 2 caption: The 2018 Paris Games was the fifth Gay Games that Buthelezi has represented South Africa in. Photo: Supplied

Photo 3 caption: Buthelezi became the first South African, and the first African, to be elected to the Board of Directors of the Federation of Gay Games. Photo: Supplied

Photo 5 caption: A signature project of the KZN LGBT Recreation organisation, Buthelezi is looking forward to hosting the AfroGames at the University of KwaZulu-Natal in December. Photo: Supplied