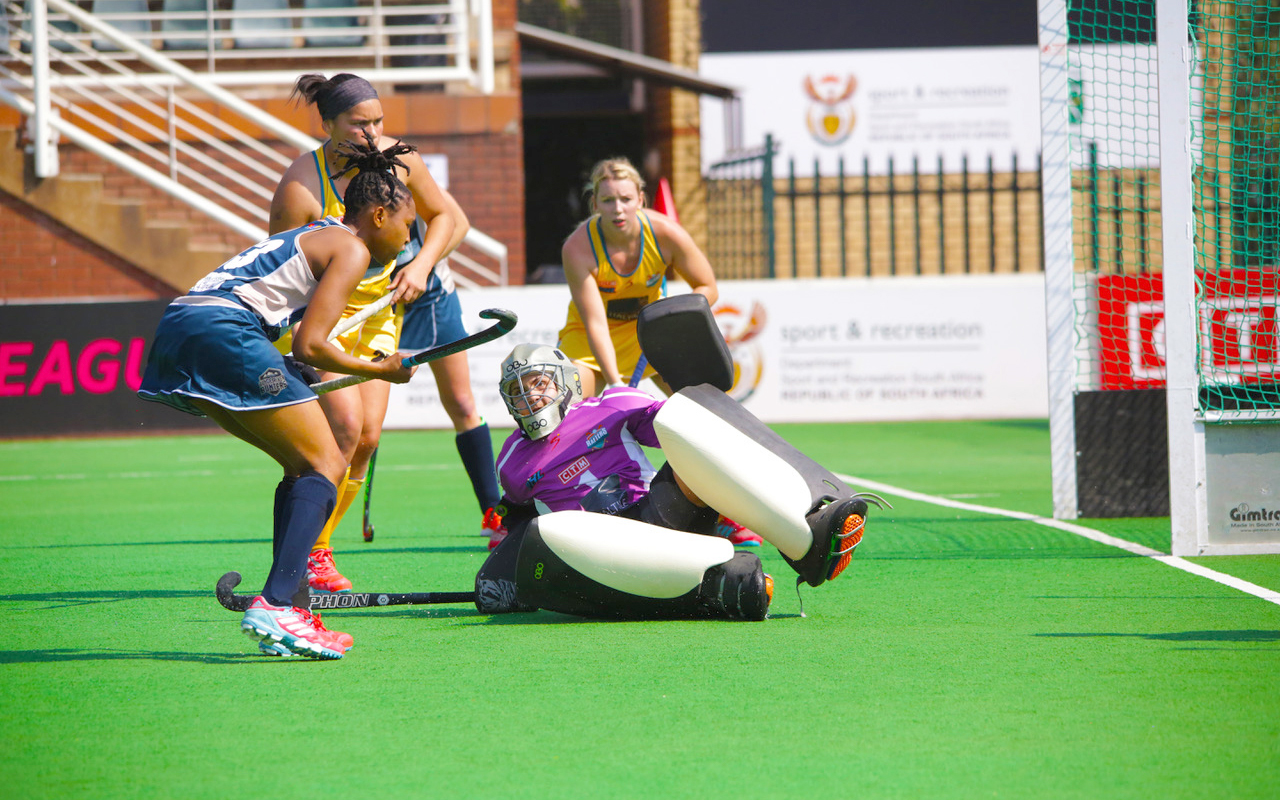 The first match drew surprise when the Orange River Rafters defeated favourites the Blyde River Bunters 2-0, counting as one of the few times in CTM Premier Hockey League history that the Bunters have been unable to score.

Shaun Hulley’s side were top value for their victory that made it 3 out of 3 in this year’s tournament. Although it was built on a fine defensive display, helped by SPAR South Africa indoor keeper Cheree Greyvenstein back in goals, it was two moments of magic that saw the defending champions win. Lerato Mahlangu and Mia Barnard both benefited from superb link up play behind them, with Sulette Damons pass for Bernard’s goal special.

The Lakers got their second win in two thanks to Tegan Fourie scoring in the top left corner with a superb drag flick. With the South Africans looking for a drag flicker for the national team you can’t fault the effort of Fourie in giving her team the lead.

It really could have been 3 or 4 for the Lakers who were once again superbly marshalled by Erin Hunter and player of the match Kara Botes.

The Madikwe Rangers resurrected their 2018 CTM Premier Hockey League with a bonus point victory against the Daisies. However, they found themselves trailing at half time when Lauren Nina sent Modipane one way and the ball the other.

Facing the daunting possibility of being 0 from 3 the Rangers poured forward and with just 3 minutes left in the third quarter pulled one goal back through Sylvia van Jaarsveldt. The goal was because of a poor defensive mistake. There no mistake and just all class in the second strike by van Jaarsveldt whose tomahawk strike flew into the top corner. The ball just inside the D and arguably the goal of the tournament so far!

In the fourth quarter the Daisies pushed forward to try and level the game, but the Rangers were belligerent in their attack. Nomnikelo Veto pulling a van Jaarsveldt in scoring her own tomahawk.  There was time for one last goal and it fell to skipper Lisa-Marie Deetlefs with a signature penalty corner sealing a 4-1 win and importantly the bonus point for the 2016 finalists.

Daisies and Wings Draw while Rafters Forge Ahead on Day Four

The only two undefeated teams played out an enthralling battle for supremacy, and it was the defending champions who landed the knockout punch in the titanic clash.

The only goal of the incredibly tight battle was settled by a Casey-Jean Botha field goal in the 35th minute that left Shaun Hulley’s team with a perfect record of 4 wins from 4 games, and a place in the final four.

The day’s final game was the basement battle between the Wineland Wings and the Namaqualand Daisies. The Wings were largely in control of the game in the first half, creating multiple chances and winning multiple penalty corners. After having a goal disallowed through referral, they finally managed to break the deadlock through Jess Lardant.

The Daisies produced a much better second half and found themselves back on parity through a Toni Marks opportunistic finish. Although the Wings still created more circle entries and goal scoring opportunities, they could not finish, and the game went to the shootout.

The Wings record from the previous years at shootouts read as played 6 lost 6. That record now reads 7 shootout defeats from 7 as Natalie Esteves the captain of the Daisies scored the winning goal that kept the Daisies hopes alive, and virtually eliminated the Wineland Wings from the 2018 CTM Premier Hockey League.

Day five of the 2018 CTM Premier Hockey League again showed the defensive class at the tournament with few goals scored on a tough day at the Randburg Astro.

Tournament defending champions Orange River Rafters had already qualified for the semi-finals, and were joined there by the Blyde River Bunters and the St. Lucia Lakers with their victories over the Namaqualand Daisies and the Madikwe Rangers respectively.

The Bunters were workmanlike in methodically overcoming their defeat yesterday to beat the Daisies, themselves on a high from their shootout victory against the Wings yesterday. Carmen Smith got the game’s opening goal from a 39th minute penalty corner and from thereon out the Bunters managed to hold out the advances of the Daisies. The icing on the cake arrived in the second last minute of the game as Mmamoagi Kungoane settled the game once and for all.

The St. Lucia Lakers welcomed back Shelley Jones into their line-up but were once again superbly led by the defensive duo of Erin Hunter and Kara Botes. The defensive stability meant that the likes of Kristen Paton, Isabella da Rocha and Lisa-Marie Deetlefs were thwarted time after time.

The Lakers needed someone to convert up the other end and Tegan Fourie, who scored a blinding drag flick yesterday, showed she is a name you really should know in SA Hockey. The Indoor international created a small pocket of space and fired into the back of the net.

So much yet to play for on tournament Day Six

30 games of hockey over 6 days produced 37 goals to decide the final four women’s sides in the 2018 CTM Premier Hockey League.

The early story on the day was the Wineland Wings and the Madikwe Rangers playing off for a place in the Quarter Finals, with the Namaqualand Daisies waiting to capitalise. The pressure and fatigue took its toll on the players and ultimately the quality but the Wings, knowing a victory gave them a chance, took the lead through Candice Manuel, reminding SA Hockey fans of her quality in front of goal.

Young Stephanie Botha extended the lead in the third quarter to 2-0 giving the Wings a real chance of progress. The Rangers needed someone to take the game into their own hands and they are fortunate to possess a player with the quality of Kristen Paton.

The South African World Cup squad member pulled a goal back in the third quarter from a penalty corner before saving the best for last in levelling the game in the last minute. For the Wings it was the dreaded shootout that already meant they were eliminated from the tournament. To add insult to injury it was the Rangers that won the shootout and the three points and gave the Wings their 8th straight shootout defeat.

That result meant that the final game had something to play for still. The Daisies would qualify for the semi-finals with a 6-goal win, while the Rafter would become the first team in PHL history to complete a perfect group stage.

Unfortunately for the Daisies in a very slow match, the Rafters possessed the quality when Donna Small went on a slalom run that set up Lerato Mahlangu, the poacher finished superbly. As much as both teams tried, the legs were gone, and no further goals were found.

In the other women’s game both the Blyde River Bunters and the St. Lucia Lakers had qualified already but a game that will be repeated next week in the semi-finals was lit up by two moments of quality from Carmen Smith. Her two penalty corners for the Bunters were hit with such velocity that the rebound went almost back into her own half.

Neither goal left much opportunity for Moya Smith in the goals, and probably showed teams the best way to beat the Lakers is by using your penalty corner opportunities.

Next week Saturday the Orange River Rafters reward for topping the table is a semi-final encounter with the Madikwe Rangers while the Blyde River Bunters will take on the St. Lucia Lakers again.

Photo 2 caption: Erin Hunter (St. Lucia Lakers) runs with the attention of Claire Gibbings (Madikwe Rangers) in Day 5’s early match, where the only two undefeated teams played out an enthralling battle for supremacy, and it was the defending champions who landed the knockout punch in the titanic clash. Photo: Sean Burke / PHL

Photo 4 caption: Ashleigh Datnow drives forward for the Madikwe Rangers against the Wineland Wings, on a chilly penultimate day of the tournament in Johannesburg. Photo: Sean Burke / PHL