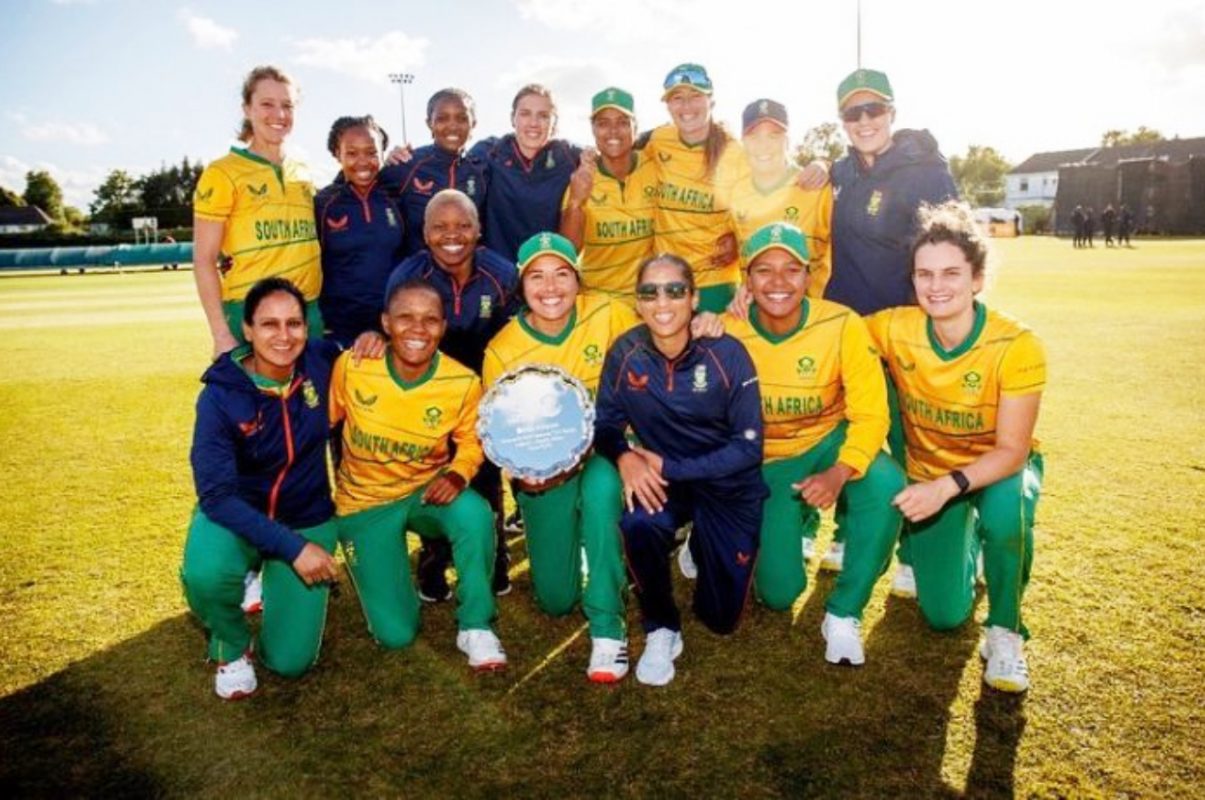 A team effort led by a superb bowling effort from Tumi Sekhukhune, Nonkululeko Mlaba and Nadine de Klerk as well as impressive knocks from Lara Goodall and Anneke Bosch inspired the Momentum Proteas to a potent eight-wicket triumph over Ireland in Dublin on Wednesday, 8 June 2022.

The Proteas Women won the toss and chose to bowl first in the series-decider at the Pembroke Cricket Club. That decision paid off almost immediately as the visitors struck two early blows to the home side’s batting order to remove Leah Paul (5) and Mary Waldron (2) and leave Ireland 11 / 2.

Star batter and Irish captain, Gaby Lewis (29) alongside Shauna Kavanagh (33) kept the South African side at bay long enough to rebuild the innings, adding 54 runs for the third wicket before Mlaba dismissed the Lewis in the 11th over.

Despite Kavanagh showing great resilience at the crease, the hosts struggled to kick on with the bat as the former was ran out by a quick reaction from Sekhukhune and Chetty in the field.

Following Kavanagh’s departure, South Africa put their foot down with the ball and picked up the remaining six wickets for just 15 runs, with Sekhukhune and de Klerk the chief destroyers for South Africa as they bowled out their opponents with 1.3 overs remaining. The returning Ayabonga Khaka (1 / 16) and captain Suné Luus (1 / 25) were the away side’s other wicket-takers.

With the bat, South Africa made light work of the chase despite the early loss of Tazmin Brits (3) as Goodall and Bosch dispatched the ball to the boundary at will, playing with the confidence of in-form batters following their display in the second T20I.

The pair comfortably batted at a strike rate of more than a run-a-ball as they looked to carry South Africa over the line before the left-hander, Goodall fell agonizingly close to a back-to-back half-century.

Bosch and Laura Wolvaardt (9*) then saw their side home in a convincing fashion, surpassing the target with more than six overs to spare to give the Proteas Women an emphatic series win, their first since defeating India in March 2021. Goodall was awarded the Player of the Match award for her match-winning batting display, while special mention goes to right-arm seamer, Sekhukhune who claimed a series-leading eight wickets at a strike rate of 8.6.

The Momentum Proteas will return to the field of play on Saturday, 11 June for the start of the OneDay International Series against Ireland, with the three-match contest marking the beginning of the Proteas’ ICC Women’s Championship 2022-25 campaign.