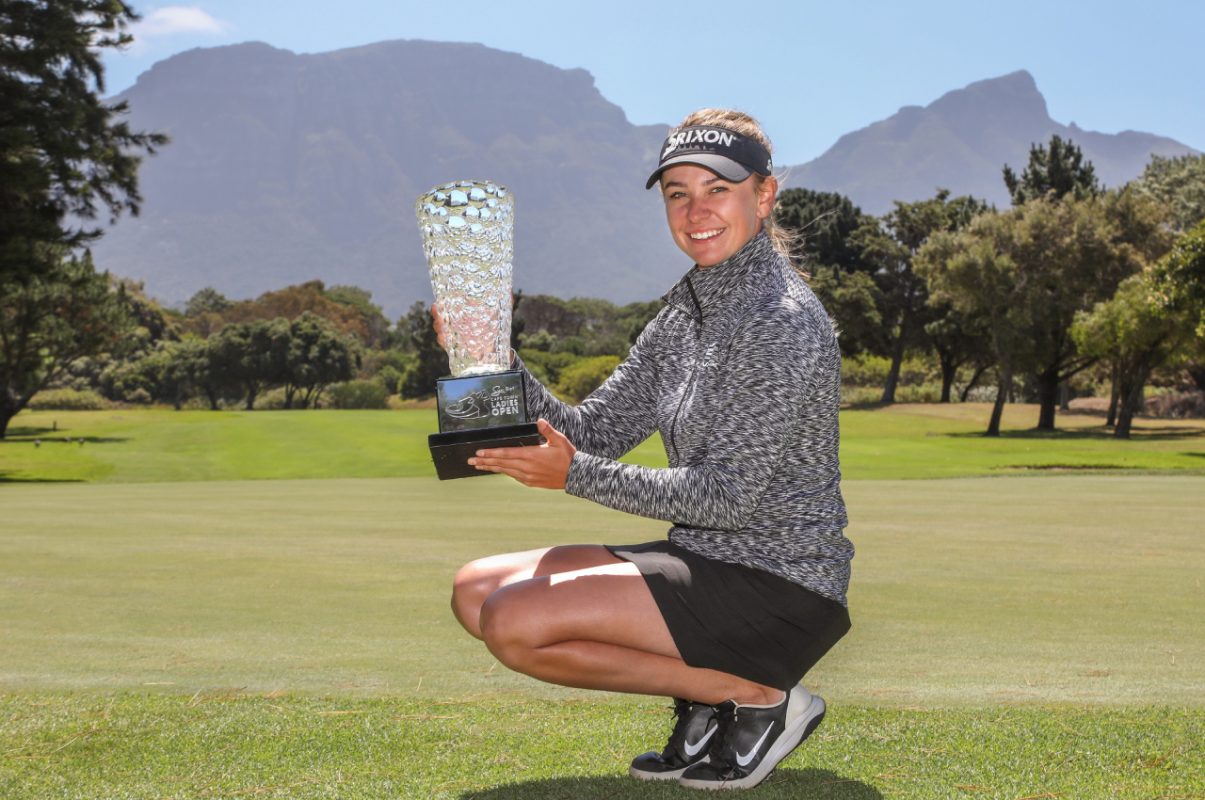 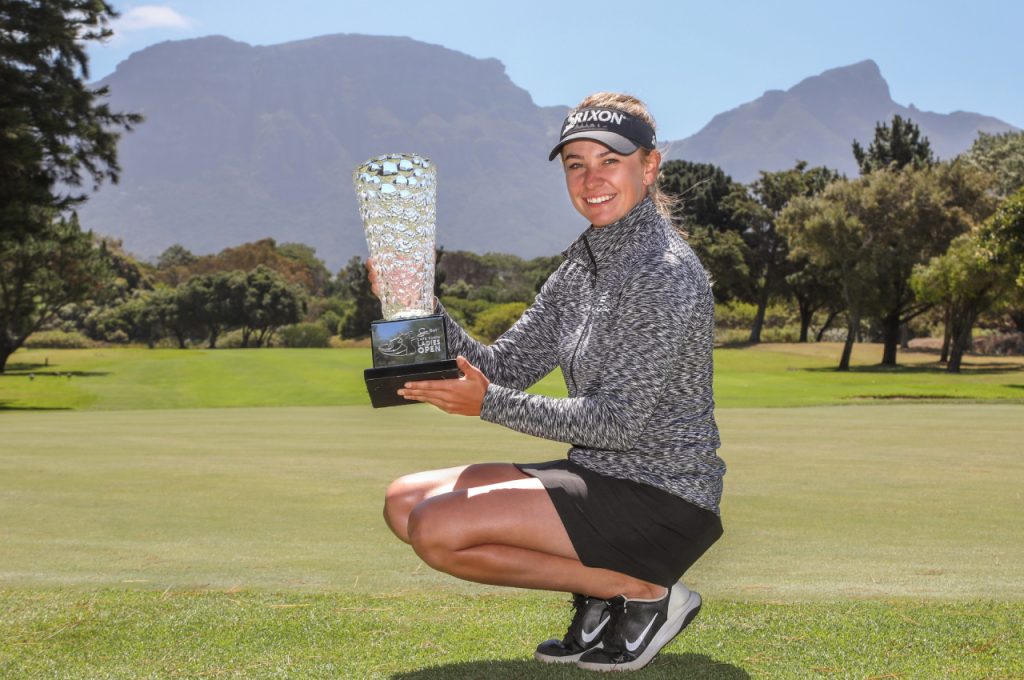 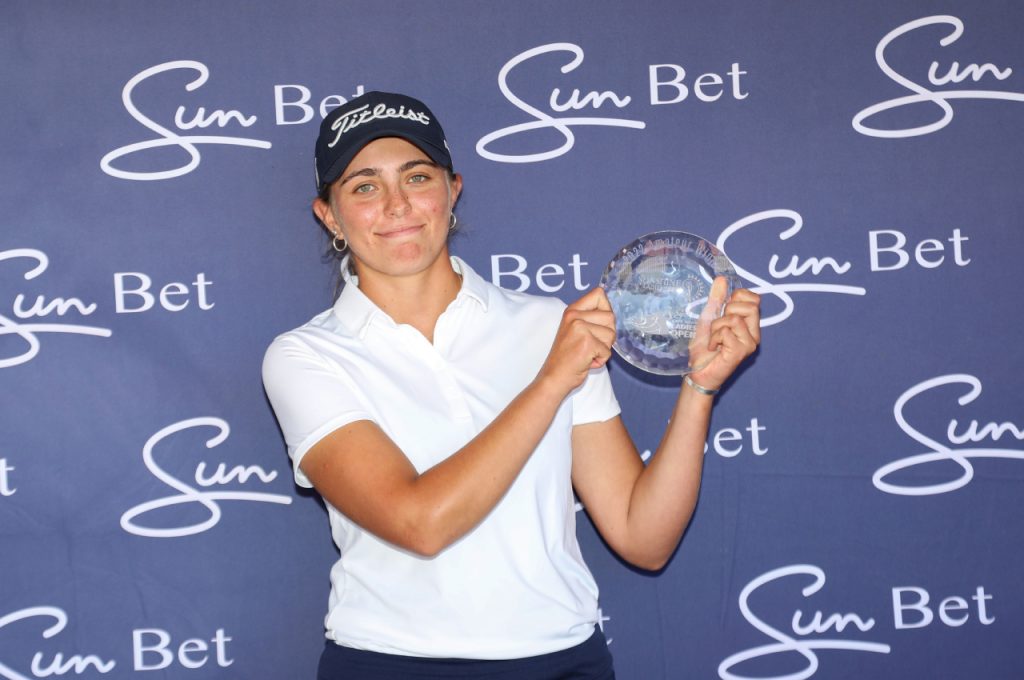 Nadia van der Westhuizen was pushed all the way by a group of seasoned champions, but held her nerve to claim a maiden Sunshine Ladies Tour title at the SunBet Cape Town Ladies Open at Royal Cape Golf Club on Friday, 4 February 2022.

In a tightly contested final round, the 20-year-old Serengeti golfer locked in her one-shot victory in the season-opener on four-over with a final round one-under-par 73.

“This is so unexpected; it’s surreal,” gushed van der Westhuizen as she hugged her trophy.

“Twelve months ago, I was still campaigning on the GolfRSA circuit and now I’m the first winner of the 2022 Sunshine Ladies Tour season.

“I had no expectations coming into this week. I felt my game was solid, but I kept my goals realistic. I just went out there with the mindset of trying to put three good rounds together to build momentum for the rest of the tour,” she added.

“I am absolutely stoked with this win. The Sunshine Ladies Tour’s tagline is #LevelUp and I feel like that is exactly what I’ve done here this week. I used my rookie season to adjust to the pro circuit and gain experience, and this week I put everything I’ve learned into play. It’s such an awesome feeling to get this first win under the belt with the rest of the season to come.”

Rounds of 77 and 76 over the first two days in windy and wet conditions had left van der Westhuizen trailing 36-hole leader McCallum by four shots.

Van der Westhuizen Battles it Out in Last 18 Holes

She offset bogeys on two and eight for birdies on five and seven, and gains on the par-fours around the turn catapulted her into contention.

“The last 18 holes was such a tense battle. The conditions were better than the first two days, but the wind switched from a north-westerly to a south-easterly, so I had to adapt my strategy,” she said.

“On the ninth, I hit a good drive and a grip-down soft eight-iron to six feet and boxed the putt, and on the 10th, I hit another good drive. I had 120 meters to the pin in a three-club wind, so I opted for seven-iron. I hit it perfectly and holed a 10-footer for birdie.”

She picked up another shot on the par-five 14th and, but having dropped on 17, she had no idea that she held the outright lead with one hole to play.

“Those last three holes are extremely tough, and I was relieved that I got away with a bogey, bogey finish for a 73. I only realised where I was on the leaderboard after the round and I still didn’t think it was good enough,” she said.”

Van der Westhuizen’s drop on 18 resulted in a five-way tie after Bregman – five off the pace at the start of the round – birdied 16 to get to four-over.

It was anyone’s race to win, but Pace, Gorlei and Bregman all bogeyed the penultimate hole and McCallum bid to force a play-off went up in flames with a five on the par-four closing hole.

The last 12 months has been a roller-coaster ride of gains and losses for van der Westhuizen.

“In February last year, I had my best finish ever in the SA Women’s Stroke Play Championship with a third-place, and later that month I won my first provincial title in the North West Open,” she explained.

“I felt that turning pro was the right move and I loved competing on the Sunshine Ladies Tour. I played the Standard Bank Series and the Bushveld Tour to stay competitive for the Ladies European Tour Qualifying School in December, and then South Africa got hit with the travel restrictions.

“I was gutted when I had to pull out of Q-School, but this win more than makes up for it. To come out on top against winners like Lee-Anne, Stacy and Tandi is a huge injection of confidence and I’m really excited for the rest of the season.

“I’m really grateful for all the support I have from Srixon, Swagg, Serengeti Estates, Sports Management Africa and my coach, Nicole van Pletzen, and that I could justify their belief in me with this win. My favourite tournament last year was the Dimension Data Ladies Challenge, and we are heading to George next, so I’m taking this confidence and I’m determined to keep building on this.”

And #LevelUp is exactly what South Africa’s number-one ranked amateur Isabella van Rooyen will want to do after finishing as the leading amateur in the Mother City.

The Clovelly golfer tied for 15th with Ladies European Tour winner Florentyna Parker from England on 15-over. The GolfRSA National Squad member will bank all the experience gained this week as she bids for amateur golf’s most prestigious titles in the SA Amateur Championships at Championships at Royal Johannesburg & Kensington Golf Club, starting on Sunday, 6 February.