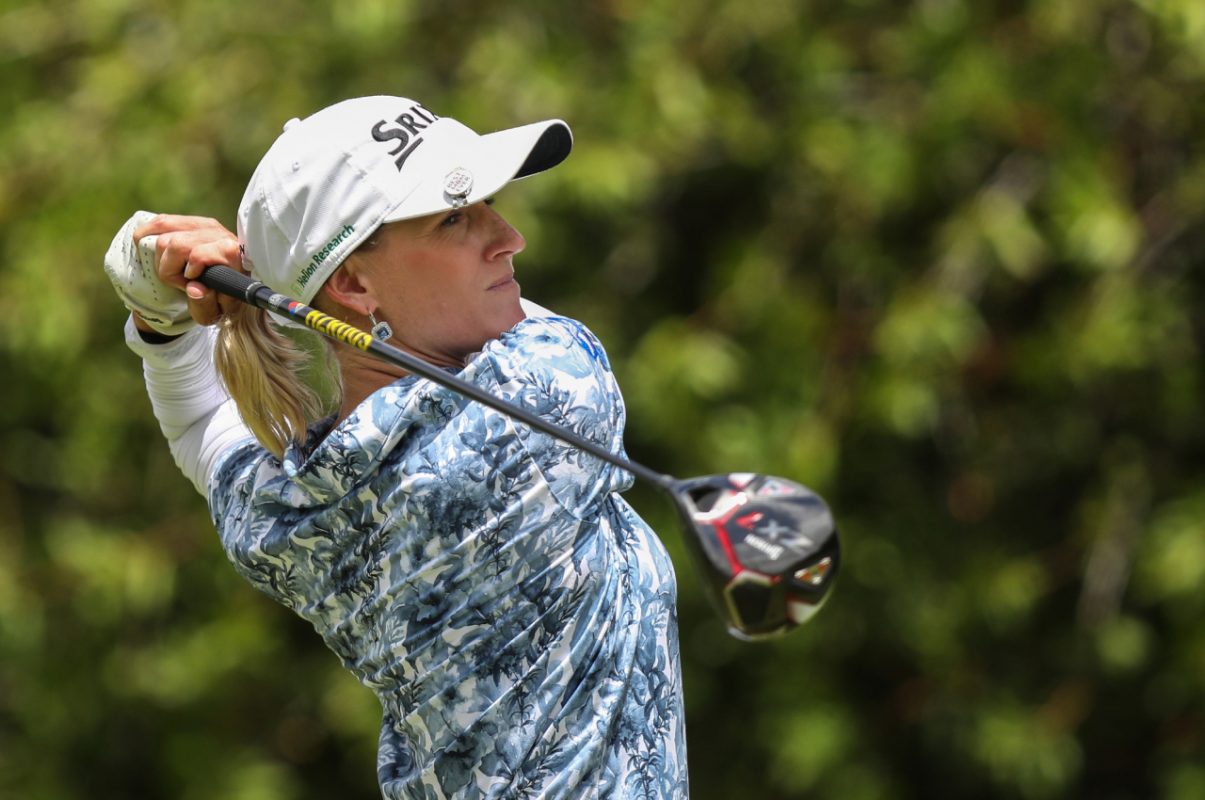 Overnight leader, Tandi McCallum, made two birdies and four bogeys on Thursday, 3 February 2022, on her way to a two-over-par 76 and the 36- lead at the Sunshine Ladies Tour’s SunBet Cape Town Ladies Open at Royal Cape Golf Club.

It was a day of changeable weather in the second round, but McCallum was able to navigate the changes in conditions well enough hole to be one clear of Cara Gorlei, Thalia Martin and Nicole Garcia, who shared second on two-over-par.

“It was quite a mixed bag today,” said McCallum.

“Conditions were very varied. It started off with a lot more rain than yesterday. There was still a bit of a north-wester, but not nearly as hard, so the rain was coming straight down, rather than sideways.

“But the course had a lot of rain overnight, so the ball stopped dead off the tee and on the greens. It was very much target golf, but it was playing quite heavy. Club selection was a lot more challenging today because the ball wasn’t flying as far. Then the clouds burnt off and the sun came out, so the ball started going a bit further and we had to adjust again for the changing conditions.

“I started swinging a little freer as all the rain gear came off, so the front nine and the back nine were two very different nines and you had to keep your wits about you.”

The tale of two halves could be seen on McCallum’s scorecard, with three of her bogeys coming on the front nine within the first five holes. But there was only one dropped shot on the homeward nine, and, with her birdie on the 11th, that meant she came home in level-par to be one-over heading into the final round.

For McCallum, seeking her first title since her 2014 Sun International Challenge success, it’s a question of more of the same in better weather for the final round.

“I’m going to try and keep my strategy the same,” she said. “My core strategy is good. The weather is going to be very different tomorrow – sunny, and the south-easter will be blowing. It will be a different course for everybody. I’m going to play one shot at a time, as cliched as that may sound. But I’m going to have fun tomorrow, not get too serious, and see what comes.”

Of McCallum’s pursuers is Cara Gorlei, who led the first two rounds in last year’s event but was denied a maiden pro title by Manon Gidali. The French golfer defeated Gorlei on holed a 25-foot birdie putt on the first extra hole.

Gorlei fired the best round on the day with her two-under-par 72 – one of just three rounds under par on the day – to put herself in a great position to have another shot at the title.

The trio led by Gorlei in second will start the final round one clear of Norway’s Maiken Bing Paulsen, Lejan Lewthwaite and reigning Investec South African Women’s Open champion Lee-Anne Pace, who is hunting a record fourth title in the Mother City.

South Africa’s No 1 ranked amateur Isabella van Rooyen took charge of the amateur challenge with a round of 77 that moved the GolfRSA National Squad member to 14th on 10-over. The Clovelly golfer sits two clear of Kim de Klerk from Mossel Bay, with Western Province’s Nina Grey a further two shots adrift.