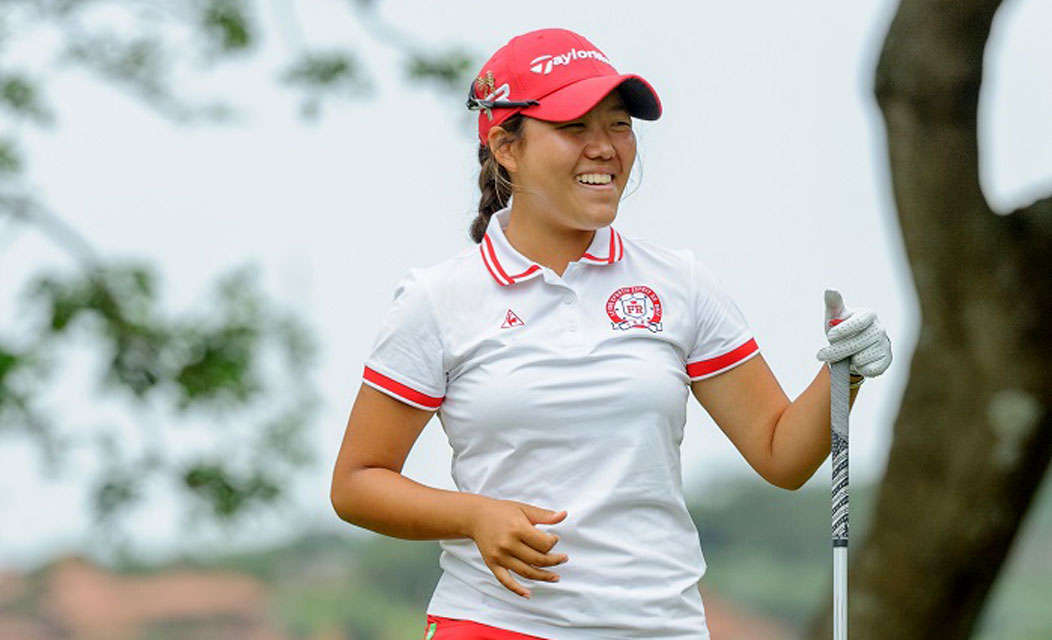 South Africa’s top ranked Woo-Ju Son, Chante van Zyl from Free State and Western Province’s Kaylah Williams are the joint leaders in the Nomads SA Girls Championship at the end of day one in Orkney.

Williams set the clubhouse target at Orkney Golf Club with a one-over-par 73.

However, when the first round action wrapped up, the Bellville golfer had Van Zyl and Son for company in pole position, with reigning Nomads SA Girls Rose Bowl champion Kaiyuree Moodley – targeting the elusive double – just one off the pace.

“There was a nip in the air when we teed off, but conditions were definitely warmer than I’ve experienced over the last three years in Orkney,” said 15-year-old Williams. “It warmed up nicely, but the wind really picked up on the back nine, which made some pin positions very tricky.”

The former Sanlam SA Women’s Stroke Play Championship B-Division winner got out of the blocks with a birdie start and five straight pars, but dropped shots at seven and eight.

“I missed one putts for pars at both holes, parred nine to turn one over and then I had to face my nemesis at Orkney Golf Club,” Williams said. “In three years, I haven’t been able to conquer this par five and this year was no different.

“I hit three-wood down the right and had to punch out and the ball landed behind a tree in the middle of the fairway. I tried to hit a low fade, but I teethed it and flew the green, leaving me with a tough downward chip. I caught the chip too hard and it ran past the flag and into the water. I chipped and putted for the double, but at least I chipped in for birdie at 11 to gain one shot back.”

After a drop at 14, Williams made amends for 10 with an eagle at the penultimate hole. “I hit my tee shot right and the ball hit a tree and ricochet right onto some hard ground,” she said.

“I had 150 metres left to the pin and a clear line, so I just told myself to go for it and I smacked a six-iron to six feet and holed the putt for eagle. It felt good to get my revenge on the 10th. Hopefully it’s a good omen and I can keep it going to stay in contention for the title.”

Van Zyl from Welkom had the measure of the 10th hole, though. “I haven’t played as many events as usual due to the academic workload, and I made a really nervy start with back-to-back bogeys at two and three and another drop at seven,” said the Goudveld High School matriculant.

“I hit my drive at the 10th exactly where I aimed it down the right. I laid up with an eight-iron and I had just 65 metres to the pin, which was at the bottom of a big downward slope. My sand-wedge caught the top of the slope and I watched it spin back and disappear down the hole.

“At 17 I had another eagle chance when I hit a seven-iron to six feet, but the putt lipped out. I made the birdie to take the lead, but unfortunately dropped at the last hole because of indecision. The wind was blowing quite hard and I was between clubs after a great drive.

“I went with the wedge, but I pulled it left of the green and couldn’t up-and-down to save par. Still, it was a much better start than I expected and I’m pleased to be in the mix.”

Son – already a six-time winner this season – also overcame a shaky start with bogeys at two, three and five with three successive birdies from the ninth, but a late bogey at the par-three 16th cost the Country Club Johannesburg player the outright lead.

Jenefer Haw from Ebotse carded a 75 to finish in fifth, fellow Ekurhuleni junior Kiera Floyd and defending champion Danielle du Toit from Gauteng North are a further shot adrift in joint sixth and Gauteng’s Chiara Contomathios signed for a 77 to close out the top 10 alongside Kajal Mistry, the reigning Sanlam SA Women’s Amateur Stroke Play champion.

Meanwhile Kira Kappeler from Southern Cape took the B-Division lead for 10-18 handicaps. The Kingswood junior carded a 10 over 82 to pull two strokes clear of Border junior Ciara Koekemoer from Burgersdorp Golf Club and she leads Kim Turgut from Jackal Creek by three shots.

The 2017 Nomads SA Girls Championship drew a field of 104 entries that includes 21 juniors who will start the launch their 36-hole battle for glory in the C- and D-Divisions on Monday. The C-Division is for the 19-25 handicapped juniors and the D-Division for players with 26 to 32 handicaps.