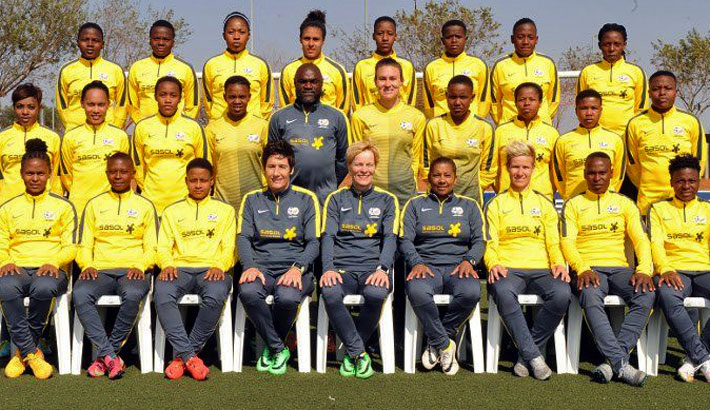 Banyana Banyana head coach Vera Pauw has announced a squad of 22 players for the upcoming 2015 All Africa Games which will take place in Brazzaville, Congo from 3 – 18 September.

Pauw has kept the bulk of the squad that has done duty for South Africa in the last few matches, but two players will not travel to Congo with Banyana Banyana only allowed 20 players for the tournament.

In addition, Pauw was not able to get some of the players she wanted – all the overseas-based players have been left out, because the tournament comes outside the FIFA Calendar.

Jermaine Seoposenwe, Robyn Moodaly, Kelso Peskin, Kaylin Swart were not released by their clubs, as well as Thembi Kgatlana. Goalkeeper Roxanne Barker from Iceland is also a doubtful starter. She will not be available for the first two matches.

“Unfortunately it is the way it is. As long as these matches or tournaments do not fall under the FIFA Calendar dates we will always have these challenges. But I have confidence in the players that we have in the team. I believe we will do well,” said Pauw.

The Sasol-sponsored Banyana Banyana have been draw in Group B alongside Cameroon, Ghana and Egypt while hosts Congo are in Group A with Nigeria, Tanzania and Ivory Coast.

The South Africans open their encounter against Cameroon on Monday, 7 September at the Stade de l’unite 3. Kickoff is at 17h00 local time in Brazzaville (18h00 SA Time).

The second match will played three days later (Thursday, 10 September) against Ghana at the same venue with the same kickoff time.

The last group stages encounter will also be held at the same venue on Sunday, 13 September against Egypt. Kickoff is also at 18h00 South African time.

The semi-finals are scheduled for Tuesday, 15 September while the final is penciled in for Sunday, 18 September.

“The challenge is that the matches come in thick and fast, more so should we proceed to the semi-finals, with not much time to rest – so we will be forced to make as many changes as possible to always have fresh legs,” added Pauw.

“But the exciting thing is that this tournament could not have come at a better time as it is ideal preparations for the 2016 Rio Olympic qualifier against Equatorial Guinea in October,” she said.

“We could not have asked for better preparations. I have always been saying that with the calibre of opposition at the All Africa Games – Cameroon, Ghana and Egypt – we will no doubt be better prepared for the Olympic qualifiers. On that score I am very happy.”

Banyana Banyana are currently in camp and will join SASCOC as part of Team South Africa squad on Saturday, 29 August.

They are expected to leave for Brazzaville, Congo on Wednesday, 2 September.

“As an Association, we would like to wish the team all the best in the upcoming All Africa Games,” said SAFA CEO Dennis Mumble.

“Banyana Banyana has done well over the years in the tournament getting to the final on two occasions – 2003 and 2007- while finishing fourth in the last edition in 2011.

“We are confident with the recent positive results, the team will do well and come back victorious from Brazzaville. We urge all the South Africans to be behind the team,” said Mumble.

His sentiments were echoed by the team sponsors, Sasol. “We are delighted to continue our association with SAFA,” said Maurice Radebe, Sasol Group Executive Committee member.

“As a proudly South African company we remain committed to the development of women through sport and are particularly proud of Banyana Banyana’s participation in the All Africa Games.

“We want to congratulate all the players who have been selected to represent the country and we wish them all the best. As Sasol, we are behind the team and believe it will make South Africa proud,” said Radebe.

Olympic Games Qualifier Info: Equatorial Guinea beat Nigeria 2-1 in the second leg in Malabo – the first leg in Abuja ended 1-all. Banyana Banyana will host the first leg of the final round on the weekend of 2, 3, 4 October 2015, with the return leg scheduled for the weekend of 16, 17, 18 October, in Equatorial Guinea. The winner will qualify for the Olympic Games, from 5 – 21 August 2016 in Rio de Janeiro, Brazil.

Photo 1 caption:  The Banyana Banyana squad of 20 selected for the 2015 All Africa Games in Brazzaville, Congo, in September. Photo: SAFA