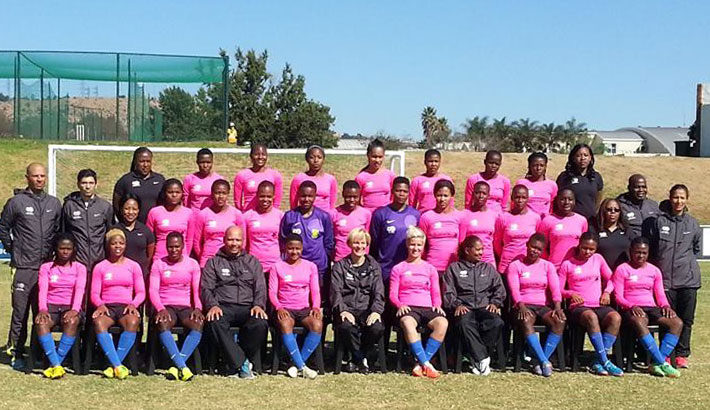 SASOL Banyana Banyana appeared sharp and highly motivated as they continued with their preparations for the international friendly against Ghana set for Sunday at Dobsonville Stadium.

Kick-off is at 15h00 and the match will be televised live on SABC1.

SASOL Banyana Banyana held their fourth training session on Thursday morning at the Bedfordview Football Club grounds. Coach Vera Pauw expressed delight at what she saw at training adding that the match against Ghana should be an entertaining spectacle.

Portia Modise reiterated coach Pauw’s sentiments, and added that the players were looking forward to the match and urged supporters come out in their numbers.

“Preparations are going well. Every training session under coach Vera is an eye-opener and we continue to learn and improve our game. We hope the supporters will come out in their numbers to support us and enjoy the entertainment.

“We are very grateful to have a partnership with SASOL that is not only supporting us financially but also shares our common vision to ensure that Banyana Banyana become a force to be reckoned with in continental tournaments such as the CAF African Women’s Championships, and internationally,” said Modise.

The match forms part of Banyana Banyana’s preparations for their African Women’s Championship qualifiers match against Comoros to be played on 23 May 2014.

In more happy news for the team, Banyana Banyana captain and central defender Janine van Wyk looks set to return to the starting 11 for the friendly match, making her return after almost three months, due to a collateral knee ligament strain, missing the clash against Zimbabwe last month.

“It’s the first time I am training with the team again, and it feels really good to be back. I have been out for 13 weeks without playing football and doing rehabilitation. There are still a few areas I need to work on and get the injury out of my mind. But I am sure I will be ready in the next couple of days,” said van Wyk.

“I cannot wait to take the field against Ghana, which I believe will be a much tougher opponent than Zimbabwe. They are more physical, but I think we can compete with them.

“The last time we faced the Black Queens, we were able to pip them through a penalty shootout, and we are looking to do one better for the fans by defeating them within the allotted 90 minutes,” she concluded.

Defender Letago Madiba, who plies her trade for Tshwane University of Technology in the SASOL League, remains the only injury scare for the team ahead of the match after sustaining a knee injury during today’s training session.

The Ghana friendly match will be Pauw’s second match in charge since making her coaching debut with Banyana Banyana in the 2-2 draw against neighbours Zimbabwe last month.

Main photo caption: National coach Vera Pauw is confident that SASOL Banyana Banyana look sharp and motivated ahead of their international friendly against Ghana’s Black Queens, at the Dobsonville Stadium on Sunday. Kick-off is at 15h00, and the match will be televised live on SABC1. Photo: Supplied

Photo 2 caption: National skipper Janine van Wyk is delighted to be back in the starting 11 for SASOL Banyana Banyana on Sunday, after 3 months on the sidelines recovering from a collateral knee ligament strain. Photo: JVW Girls Football