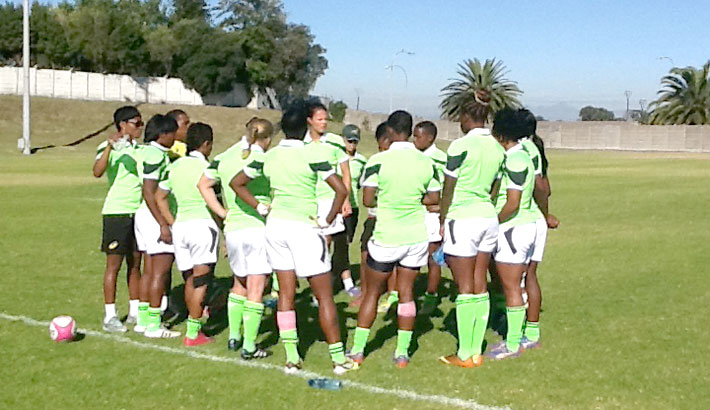 Springbok Women’s Sevens coach Renfred Dazel on Thursday said he had high hopes for his team at the IRB Women’s Sevens World Series event in Amsterdam, starting tomorrow, as they completed their preparations for their toughest assignment of the year.

The Springbok Women’s Sevens will face Russia, Australia and France in a challenging pool, with Australia posing the biggest threat as they are only two points behind Women’s World Series log leaders New Zealand going into the final leg of the competition.

Russia, meanwhile, are also among the eight core teams on the World Series circuit, while France participated in the Dubai and China tournaments, and will draw confidence from their victory against Dazel’s team in the Hong Kong Invitational plate semifinal in March.

The tournament will run over two days.

Given the high quality of the opposition Dazel expected a tough onslaught, but he was excited to see his team in action against some of the best sides in the world.

“Australia plays a good running style of rugby and they have skilful players, so we are expecting a good challenge against them,” said Dazel.

“Russia on the other hand plays a more physical game and they have some speed, so the contrast between those two attributes is something we will have to watch out for. France, meanwhile, play a unique style of rugby, which is very different to last season. We faced them in Hong Kong and we were not successful on that occasion, so the players are hungry to give it another go.”

The Springbok Women’s Sevens won only one of their five matches at last year’s Amsterdam World Series event, but Dazel was open about his desire to see a vastly improved showing from his charges in the next two days.

“We certainly hope to deliver a much better performance this year because I believe as a team we have a better understanding of the game,” said Dazel. “We are currently in a centralised training program, which involves spending a fair amount of time on conditioning and technical skills, so we are better prepared than last season.”

While the team’s performance will not have a direct influence on their path to qualify for the 2016 Rio Olympic Games, Dazel said a good performance would be vital to boost the team’s confidence ahead of the qualifiers for the 2014/2015 IRB Women’s World Series, which are expected to be held in France later this year.

The top four teams on the 2014/2015 World Series log at the conclusion of the competition will qualify automatically for the Olympic Games.

“The tournament will definitely give us a good idea of where we are compared to the teams on the World Series circuit and it will also provide a platform from which we can build going into the qualifiers,” the coach concluded.