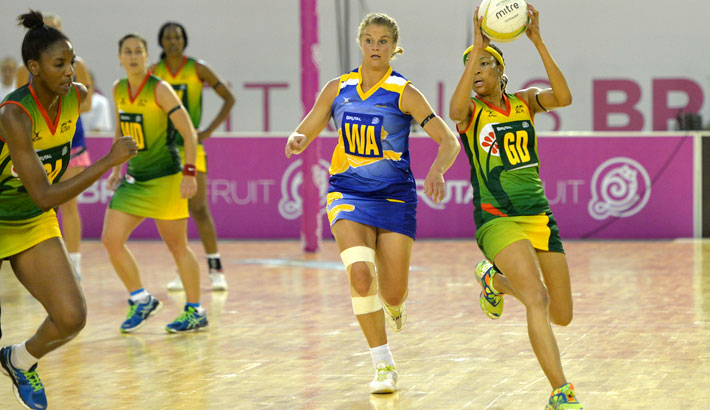 The stage is set for the first ever Brutal Fruit Netball Cup derby between Gauteng’s Jaguars and Golden Fireballs as Netball South Africa’s premier competition enters Week 2, at the University of Pretoria Sports Complex this weekend.

(Click here to read the tournament’s opening weekend report on gsport, and scroll down to view results and fixtures, and Division 1 and 2 logs, as at 12 May, 2014)

The two teams, who are counted among the favourites in Division 1, recorded mixed fortunes in the opening weekend with the younger Jaguars – counting just three players over 23 years of age, surprising everyone by winning their opening two matches, beating the powerhouse teams North West Flames and Eastern Cape Aloes.

The Gauteng derby will kick-off at 1pm on Saturday, and promises to be a titanic encounter as the teams know each other exceptionally well, and will want to snag the provincial bragging rights. Both teams are littered with players who have national team experience.

For the Jaguars, their 1.89m-tall Goal Shooter Melissa Myburgh will be the main target, while SPAR Proteas premier Goal Shooter Chrisna van Zyl (formerly Bootha) will want to stamp her authority on the competition.

“It’s a difficult one to call as the teams are evenly matched. It’s will come down to tactics on the day,” said Netball South Africa CEO Blanche de la Guerre. “The matches so far, especially in division one, have gone down to the wire and we certainly expect more of the same.”

The Gauteng derby is not the only mouth-watering prospect. On Sunday the unbeaten Crinums and table-topping Jaguars will face off in what, for now, looks like a possible final, if their performances in their opening matches are anything to go by. Both teams were near flawless on opening weekend and whoever edges this encounter will surely be considered a title favourite.

The Crinums’ SPAR Proteas defensive pair of Karla Mostert and Adele Niemand was superb during Week 1, and will be well aware of the threat posed by their national team colleagues Myburgh and Lindie Lombard. The Crinums, who also recorded an opening weekend double win, face the Eastern Cape Aloes, who go in search of their first win and a vital two points to keep up with the league’s pace setters.

Aloes’ SPAR Proteas star Zanele Mdodana said her team would improve as the tournament went on. “It’s important that we improve on our performances from last week. While we did some things right we made a lot of unforced errors which we need to correct. Some of our mistakes cost us dearly,” she said.

Also looking for their first win of the campaign is the North West Flames, who were unfortunate to lose both their opening matches by the slimmest of margins, just one goal. Coach Dorette Badenhorst believes that a win is around the corner.

“It was tough losing our opening two games by just one point but it shows you how intense the competition really is. We are well aware that we must pick up a win or two this weekend to stay in the hunt for a semi-final place. Nevertheless we will take each quarter as it comes, set our goals and take it from there.

“We know it will be difficult, as both the Aloes and Fireballs are very strong,” said Badenhorst.

In Division 2 the Southern Stings (Western Cape) will look to continue their fine start in the battle for promotion to Division 1. With a massive 71—14 win over the Mpumalanga Sunbirds, they signalled their intentions and are the only unbeaten teams in the division after opening weekend.

All eyes will be on the Mpumalanga Sunbirds who have the most to prove after having their wings clipped by the Stings and they will hope to bounce back against the Kingdom Stars (KwaZulu-Natal), no easy task as they are marshalled by arguably South Africa’s best player in diminutive Centre Bongi Msomi. The Stars, Northern Cape Diamonds and Limpopo Baobabs have reason to be positive going into Week 2 having each picked up one win in their opening two fixtures.

Main photo caption: The Eastern Aloes’ SPAR Proteas star Zanele Mdodana controls her team’s movement forwards as Izette Lubbe for the Jaguars watches on intently, during the tournament’s first weekend. The Aloes are searching for their first win, and take on the North West Flames and the highly-rated Free State Crinums during the inaugural Brutal Fruit Netball Cup’s second weekend, at the Tuks Rembrandt Hall at the University of Pretoria. Photo by: Catherine Kotze/SASPA

Second photo caption: The GP Jaguars’ 1.89m Goal Shooter Melissa Myburgh will be a key target for the Golden Fireballs in the highly-anticipated Gauteng derby which kicks off the popular tournament’s second weekend at 1pm on Saturday. Photo by: Catherine Kotze/SASPA