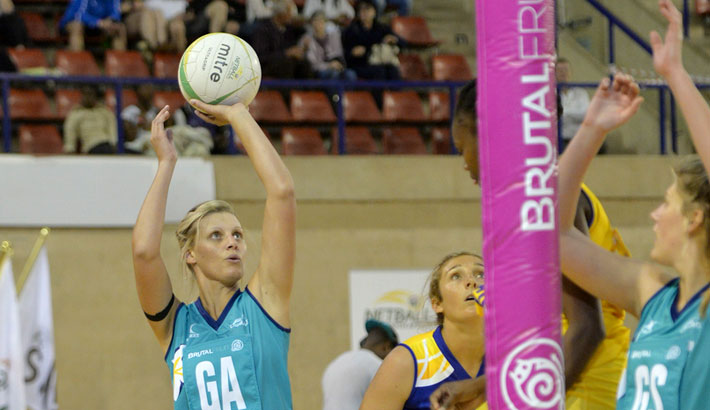 The Jaguars from Gauteng North and the Free State Crinums emerged as the front runners after the opening weekend of the long-waited Brutal Fruit Netball Cup at the University of Pretoria Sports Complex, having won both their matches.

Both teams top the first division log with four points each. The Golden Fireballs (Gauteng) have two points, after winning their first match and losing their second, while the Eastern Cape Aloes from the Eastern Cape and the North West Flames lost both matches played so far. It was heartache for the Flames, who were beaten by just one goal in both matches.

Jaguars and SPAR Proteas 1.93m-tall goal shooter Melissa Myburgh said her team was very happy with their performances but were not getting carried away. “We are a very young team and a very hungry team and we would home to improve in the weeks to come.”

In the second division, the Southern Stings were the only unbeaten side, recording victories over the Kingdom Stars and the Mpumalanga Sunbirds. The Stars and the Northern Diamonds from the Northern Cape have two points each, while the Sunbirds have yet to win a match.

Stings manager Danlee Mathews said her team were ecstatic with their start to the tournament. “We want to make it to division one this year so we’re eyeing that promotion spot for sure. There’s still a long way to go though.”

The format of Netball SA’s flagship competition, which continues over the next four weekends, means that each team play the other four teams in their division twice. The top four teams in the First Division will play against each other to determine which team will play in the final on Sunday June 8. The top team in the second division will play a promotion/relegation match against the bottom team in the first division.

Netball SA and the management of the SPAR Proteas were very happy with the tournament so far. “It’s been what we’ve needed,” said Netball SA President Mimi Mthethwa.

“Our players need to compete at a high level on a regular basis, and the Netball Cup will attract new supporters. We are bringing school children to watch the matches, and some of the matches will be televised, which means South Africa’s biggest women’s game will get greater exposure.”

Head coach of the SPAR Proteas, Elize Kotze, and NSA Director of Selectors, Christine du Preez, are keeping an eagle eye on the players with a view to selecting the team to represent South Africa at the Commonwealth Games in Glasgow in July.

All the Proteas and many of the Under-21 team are in the Netball Cup squads, and the five-week league gives them an ideal opportunity to show the selectors what they are capable of.

“I was a bit concerned that some of the Proteas are not as sharp as I’d like them to be,” said Kotze.

“But there’s plenty netball to come, and I think we will see a remarkable improvement in all the squad players. They have a lot to play for.”

She said the league was also important for the weaker teams. “They will learn so much from playing in this tournament,” said Kotze. “They will be exposed to some of the top players in the country, and match play provides the best experience of all.”

There is plenty of razzmatazz at the Netball Cup, with dancers, music and flashing lights. Each team has its own theme, and they each have a dance they can perform before matches.

“It’s what we’ve longed for,” said Zanele Mdodana of the Eastern Aloes. “I think some players who were thinking about retiring have continued playing because of the Netball Cup. It’s the best thing that has happened for a long time.”

Main photo caption: Maryke Holtzhausen of the Freestate Crinums (left) and Amanda Mynhardt of the Golden Fireballs (second from left) are the picture of concentration, as Holtzhausen lines up more points for the Crinums, during the opening weekend of the inaugural Brutal Fruit Netball Cup at the Tuks Rembrandt Hall in Pretoria. The Freestate Crinums beat the Fireballs 43-37 in their second match of the weekend, to share the lead of the first division’s log with Gauteng-based Jaguars, second on goal difference. Photo: Catherine Kotze/SASPA

Second photo caption: Gauteng-based Jaguars Wing Attack Cleopatra Kgoputso focusses on moving the ball forward, during her team’s 52-40 win over the Eastern Aloes. After two matches, the Jaguars are top of the Division 1’s log with a goal difference of 13, five clear of second-plased Freestate Chinums. Photo: Catherine Kotze/SASPA

Third photo caption: Nthabi Mputhi controls the ball for Mpumalanga’s Sunbirds with the Southern Stings’ Rochelle Lawson closing in fast. Despite a lot of heart, the Sunbirds were no match for the Western Cape outfit, who were on another level on the opening weekend of Division 2, racking up a goal difference of 74 to comfortably lead their log. Photo: Catherine Kotze/SASPA