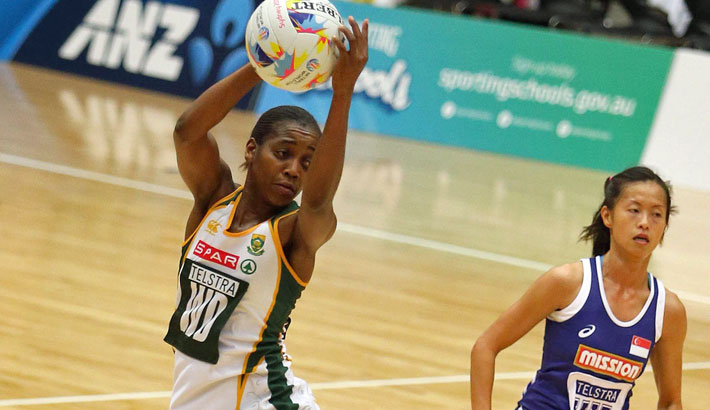 Proteas Bounce Back with WC Win over Singapore

The SPAR Proteas bounced back from their loss to Malawi on Friday with a crushing 69-21 victory over Singapore, at the Netball World Cup in Olympic Park in Sydney on Saturday.

The match was played at the Netball Central Arena rather than the much bigger Allphones Arena, and the players appeared to respond well to the more intimate setting.

Coach Norma Plummer gave players who were not involved in the first match a run, with Rochelle Lawson replacing Karla Mostert at goal defence, Elsje du Plessis replacing Maryke Holtzhausen at goal attack, and Izette Lubbe coming in for Erin Burger at centre.

“You can run your top seven and run them into the ground, or you can use your bench in the early stages and then you’ve got fresh legs when it really counts,” she said. “As far as I’m concerned, that’s the smart way to go.”

South Africa started slowly, but gathered momentum as the match continued. By the end of the first quarter, they were 15-8 ahead.

Lawson and goalkeeper Phumza Maweni did a good job in defence, preventing Singapore from scoring, and making good use of rebounds.

Du Plessis appeared nervous at first, and missed a number of shots at goal, but she improved as the game wore on.  At halftime, South Africa led 32-13, and it became clear that they had the match well under control.

Singapore scored just six goals in the third quarter, and in the final quarter – when Plummer brought on her first choice players, the Proteas closed Singapore down completely, and they were only able to net two goals.

South Africa showed remarkable consistency in scoring, with 18 goals each in the last three quarters.

Plummer experimented with positional changes, putting Mostert into wing defence instead of her normal goal defence, and then later playing Lawson at wing defence. “I always think the two positions are part of the same thing,” said Lawson.

“I was happy to play there and let the coach see what I could do.”

Lawson, was one of several players making her World Cup debut in the match, said she was thrilled to have had some time on court.

“This is what you dream about, playing in a World Cup,” she said. “I’m so happy that I got my chance.”

Plummer said she was happy with the team’s performance. “We worked on some things this morning, and they put them into practice tonight,” she said.

The two coaches, Plummer and Singapore’s Ruth Aitken, are old rivals – their last World Cup encounter was the final of the 2011 championships in Singapore, with Plummer coaching Australia and Aitken New Zealand. Australia beat New Zealand in the final.

South Africa’s final round robin match is on Monday, when they take on Sri Lanka.

Photo 1 caption:  The flexible Precious Mthembu of SPAR Proteas, pictured during South Africa’s first World Cup win over Singapore in Sydney, catches the ball in the air with a quick flexible turn, at the Netball Central Arena on Saturday, 8 August, 2015. Photo: Reg Caldecott