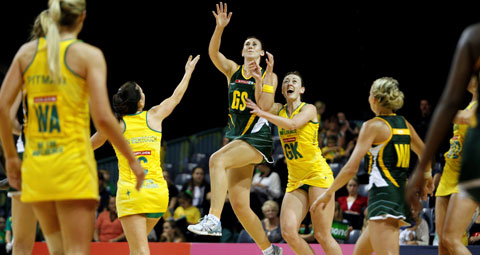 “Impressed but not satisfied,” were the words SPAR Proteas coach Elize Kotze used to describe her team’s performance in their match against Australia on Wednesday.

Pitted against the world number one-ranked team in their second match of the Quad Series, the Proteas put up a gallant effort. Although there were a number of good intercepts and defensive plays from the South African side, especially in the first two quarters, the experience and skill of the Australian Diamonds led to a 63-31 defeat.

The Diamonds were quick off the mark, and were the first to score – from a South African centre – in the first quarter. Their fast, angular play seemed to throw the Proteas, as did their very close marking. However, South Africa put up a strong defence, and Karla Mostert made a number of great plays. Bongiwe Msomi’s speed in centre assisted the Proteas in driving the ball to their circle, but the South African side was just not strong enough, and they lost the first quarter 16-9.

The second quarter proved slightly more promising for the girls in green and gold, as they appeared to be more patient on court with their focus on ball possession and shorter, sharper passes. Chrisna Bootha was on form, getting in over 80% of her goal attempts, but the deadly combination of the Diamond’s goal shooter and goal attack in Catherine Cox and Susan Pratley, as well as the team’s strength in attack, left little room for the Proteas to lessen the goal difference by much. The half-time score was 31-18.

A number of changes were made after the half-time break, as Lisa Alexander changed up her goal circle combination, and Elize Kotze moved Bongi to her home base at Wing Attack, replacing Centre with Wing Defence player Thuli Qegu. An unusual move by Kotze, as this seemed to slow the South African side down quite significantly, but may have been an attempt to prevent the Proteas from their backwards play on attack which was something they were doing regularly – to their detriment. The Diamonds capitalised on the opportunity, and raced ahead by scoring another 14 goals to South Africa’s 8 in the third quarter.

The Proteas were the first to score in the last quarter, after a brilliant intercept by Goal Attack Maryka Holtzhausen, but the intercepts were far too infrequent to have any hold on the Diamonds. South Africa continued to lose the ball close to their goal circle, and the combinations on court were evidently lacking the speed and intensity of Erin Burger (who is still recovering from injury) and Bongiwe Msomi playing together. The Diamonds dominated this quarter, closing the match with a final score of 63-31.

SPAR Proteas coach, Elize Kotze, said that playing the world champions was going to be tough, but was pleased that her team was not intimidated. “They put up a good fight, and played a competitive game. This is all part of learning and progression.” “Now we know what combinations to use for our match against England.”

The SPAR Proteas play against England, ranked third in the world, in Sydney on Sunday 21 October. The match will be broadcast on Supersport 6 at 07:05am South African time.