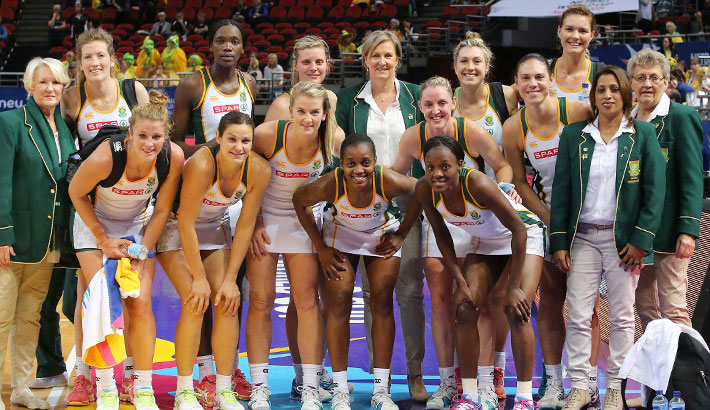 The SPAR Proteas held their nerve to beat Malawi 48-46 in a hard-fought match in which the lead changed hands at regular intervals, in their fifth place playoff at the Netball World Cup in Sydney on Sunday.

The victory means South Africa retain their fifth place ranking in world netball, and are once again officially the top team in Africa.

The Proteas came out hard from the start, and at one stage, five successive unanswered goals gave them a lead of 8-4, but Malawi clawed their way back with their own series of goals spearheaded by star goal shooter Mwayi Kumwenda. They drew level at 8-all, and then when into the lead, winning the first quarter12-11

In the second quarter, the teams once again exchanged goals, with first one team and then the other surging ahead, but in the middle five minutes, goal attack Maryka Holtzhausen and goalshooter Lenize Potgieter scored five quick goals to put South Africa into the lead again. They kept this slender lead until the end of the second half, with South Africa 23-21 ahead, with Holtzhausen scoring on the stroke of halftime.

Malawi won the third quarter by three goals, to edge ahead 36-35. Two goals from Potgieter at the start of the final quarter had the Proteas level with the Malawi Queens once again, and it became a case of which team was able to hold its nerve. Once again, a flurry of goals put South Africa back in the lead on 43-40 after eight minutes, and the Proteas retained their slender lead for the rest of the match.

Erin Burger and Karla Mostert were once again outstanding, while Potgieter looked like a veteran rather than a 21-year-old. Holtzhausen had a good game, and scored a number of her goals from the edge of the circle.

“I am glad that’s over,” said a smiling coach, Norma Plummer. “I’m delighted for the team, and for South Africa, that they have come out African winners.”

She said she had taken over as coach at short notice, and had only about three weeks working with the team before the start of the World Cup, so she was very pleased with the improvement they had shown over the tournament and appreciated the way they had shown such “hunger” for her coaching advise and the way they implemented it throughout.

Holtzhausen said they had started the game well, but had let Malawi back into the match, and had to work hard throughout to win it.

“I think the difference between this match and the opening match, when we lost, is that we have improved throughout the tournament. In that opening match, it was a first World Cup for several of the girls, and I think the nerves got the better of us,” she said.

“But this time we worked according to our game plan, and things worked out for us.”

She said Plummer’s influence on the team had been immense. “If she could do so much to improve us in a few weeks, imagine if we had her for four years,” she said. “I think we could go right to the top.”

Deputy Minister of Sport, Gert Oosthuizen paid tribute to Plummer and the team and made a special trip to the locker room following the game to show his appreciation and support. “Each one of the SPAR Protea outfit can be proud of not only what they have achieved for themselves but for South Africa as a whole.”