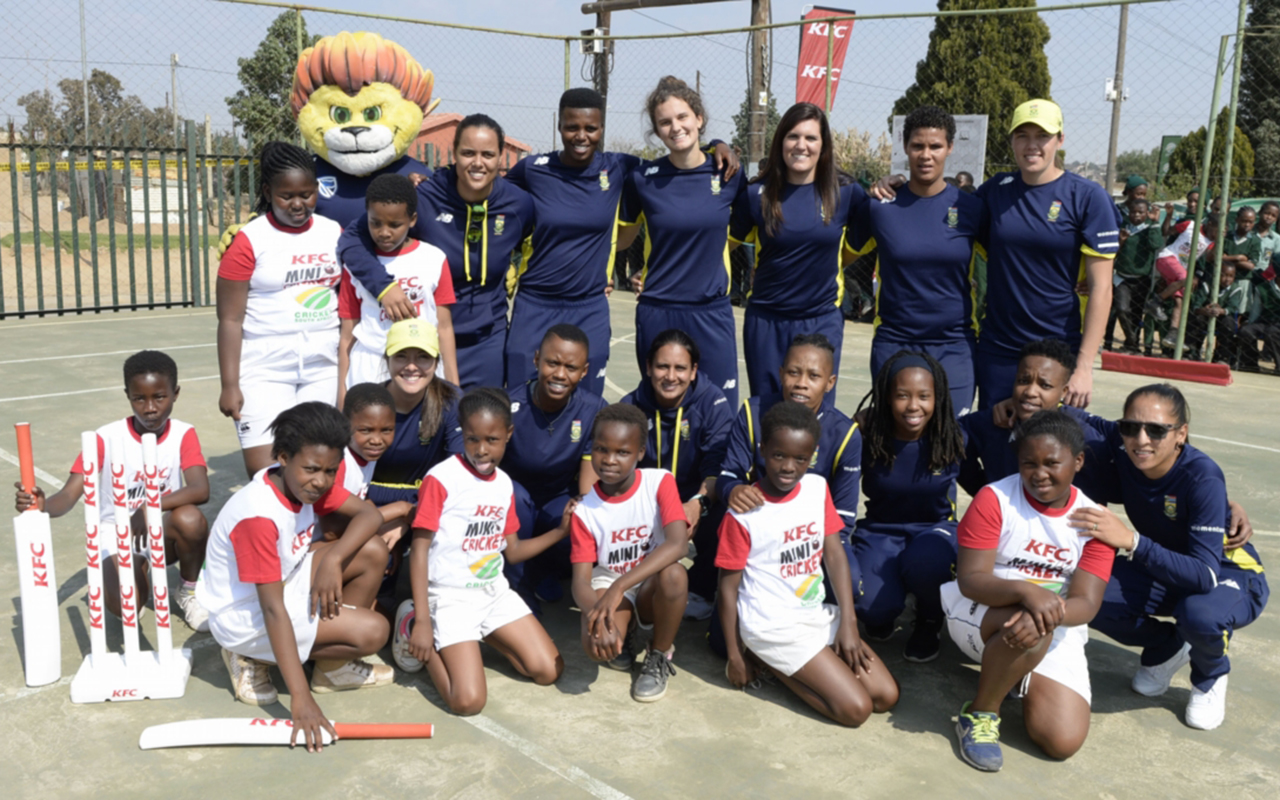 The Momentum Proteas team led by Chloe Tryon joined Cricket South Africa and KFC staff on Wednesday, 8th of August to kick off the Women’s Day revelries with an intense KFC Mini-Cricket game between the SA ladies side taking on the Makgake Primary School’s girls cricket team in Hammanskraal, Pretoria.

The Women’s Day celebratory match was followed by an introductory training drill into cricket with Momentum Proteas coach, Hilton Moreeng. His staff led over 50 girl students through a series of batting drills, exercises and fielding manoeuvres.

The all-female KFC Mini-Cricket event served as the background for this year’s Women’s Day festivity where KFC partnered with Cricket South Africa. This was to expand the game of cricket amongst young girls and display competitive events exposing them to sport-related activities together with world-class female athletes who act as ambassadors and positive role models.

KFC Public Affairs Director, Thabisa Mkhwanazi says: “KFC Mini Cricket continues to support and give equal opportunity to young children and, this Women’s Day initiative is no different. The focus is to let kids create unforgettable memories of being active outdoors while doing something they love.

“We hope that through this all female event, our young future stars are left inspired, and reminded of the endless opportunities available to them, through this first-hand experience with their ‘sheroes’.”

Cricket South Africa CEO, Thabang Moroe endorsed the all-girls team from Makgake Primary School testing their skills against their Protea heroes. “This KFC Mini-Cricket game is one we saw as a great opportunity to fostering an inclusive environment in which girls are grouped together to play the game they love and against their heroes”, says Moroe.

“We have a grand vision that girls who come to our events will continue to attend for a few years and when they get older, hopefully they will want to play cricket.

“The motivational talk from one of our female EXCO members was to make the young girls aware of their potential in the new South Africa and inspire them to gain the confidence and leadership they need to reach their full potential in life and sports,” said the CSA CEO.

The Protea ladies kept the atmosphere energised and ecstatic for the girls who took part in the cricket festivities. The school girls spent their time getting to know one another, while endearing themselves to the game of cricket.

Photo 3 caption: SA fast bowler Shabnim Ismail and a Makgake Primary School student discuss the finer arts of getting a pace ball to pitch off the seam. Photo: Supplied

Photo 4 caption: What a day of excitement for the Makgake Primary School girls’ cricket team, and Proteas mascot Zac couldn’t help getting involved in the festivities. Photo: Supplied