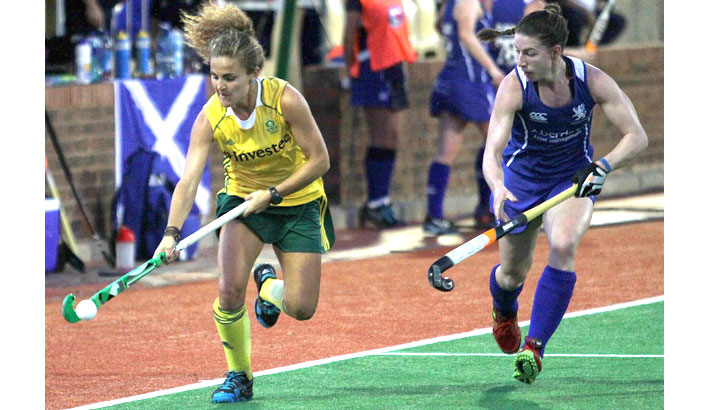 Scotland may have ended up on the wrong side of an eight-goal thriller in the first Test at Tshwane University of Technology (TUT) in Pretoria Friday night but the Scots and an equally impressive Investec South Africa women’s hockey team gave the crowd a spectacle to savour.

The 5-3 final scoreline was just a fraction of the number of quality goalscoring chances both sides carved out as hard-pressed defences were forced to scramble to contain the inventiveness and sheer pace of the attacking forays.

SA led 3-1 at half-time, but Scotland’s Ailsa Wyllie got the first goal after just 43 seconds before South Africa’s Illse Davids (fifth minute), Candice Manuel (22nd) and Lilian du Plessis (30th) hit back for the two-goal margin at the changeover.

The match had exploded into action after 43 seconds when Vikki Bunce cracked in an accurate cross from the left wing, to which Wyllie got the vital touch past SA goalkeeper Anelle van Deventer (1-0).

South Africa bounced back immediately with a number of chances before Davids had the last say when she made no mistake in the fifth minute with a well-placed shot (1-1).

Both sides were transferring the ball at pace, making for end-to-end action. Scotland were awarded a second penalty corner with 16 minutes to half-time and a deceptive variation saw Ralph’s sizzling shot from the edge of the strike zone brilliantly saved by Van Deventer, stretched far to her right.

Then a stunning Manuel strike from open play flashed into the net in the 22nd minute for the girls in green and gold to go 2-1 up. In the 30th minute Du Plessis made room for herself before smashing a beautiful backhand that thudded into the backboard (3-1).

Penalty corners aplenty, as well as open-play chances, came and went during and after the break, with Scotland – enjoying a good patch of play – drawing level 3-3 via top goals from Cat Ralph in the 47th and Nikki Lloyd a minute later (48th).

SA missed a chance from the penalty spot when Du Plessis’ effort brought a fine save out of in-form Scotland goalkeeper Nicola Cochrane low to her right. But the last 10 minutes saw a strong-finishing South Africa pile on the pressure, Davids and Manuel combining for Du Plessis to make the score 4-3 (60th minute).

SA settled the game five minutes from the end (65th) when Celia Evans showed tremendous tenacity to keep control under immense pressure before cracking in the girls in green and gold’s fifth and final goal.

The second and third Tests are at TUT at 3pm both Saturday and Sunday. The fourth is Tuesday at 6.30pm and the fifth on Wednesday at 1.30pm.

Photo caption: SA striker Tanya Britz in control as Scotland’s Becky Ward closes in during the first Test at Tshwane University of Technology in Pretoria Friday night. The Investec SA team took a 1-0 lead in the first of 5 Tests in Tshwane, beating Scotland 5-3 after leading 3-1 at half-time. Photo: Reg Caldecott