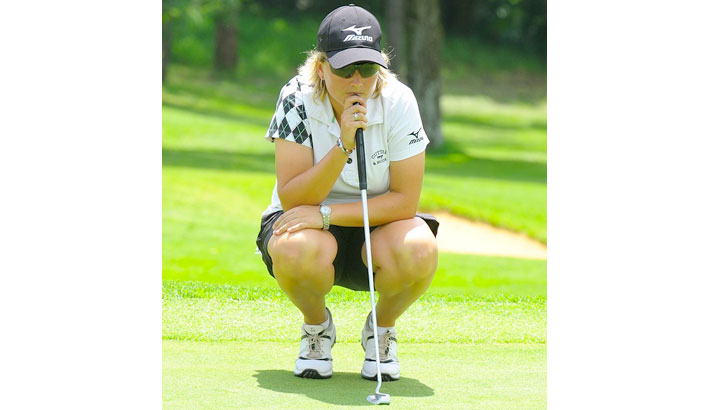 South Africa’s Kim Williams enjoyed the perfect start to her pro career when she hit the front at the Sunshine Ladies Tour’s first Chase to the Investec Cup for Ladies at Houghton Golf Club on Thursday.

The 27-year-old overcame a wobbly start to close with a two-under-par 70 and a one shot edge over compatriots Monique Smit and Caryn Louw, and Ladies European Tour (LET) campaigner Holly Aitchison from England.

But, if Williams is to achieve her dream of winning on Friday, she will also have to fend off the onslaught from a few more tough challengers lurking a couple of shots off the pace.

Former amateur rivals Nicole Garcia and Michelle Leigh went around in even-par 72s to tie for fifth, and seasoned campaigner Mandy Adamson rolled back the years with a 73 to finish joint seventh with the LET’s Maggie Yuan from Australia.

Former SA Women’s Open champion Tandi von Ruben turned in one-under, but slipped to joint ninth with Cecilie Lundgreen from Norway after closing with a 74.

KwaZulu-Natal’s Michaela Fletcher leads the amateur field at four over 76, but if the 18-year-old’s putter heats up the way it did when she claimed the Eastern Province Match Play on Tuesday, the former Nomads SA Girls champion could also cause an upset.

Williams got off to a brilliant start with an eagle at the par-four first, but immediately dropped three shots in succession as the nerves set in.

“You’d think after surviving the pressure of the Ladies European Tour (LET) Qualifying School, I wouldn’t be nervous, but I was so shaking so much on the first tee, I barely got the ball on the tee,” she said.

“After that eagle, the nerves just went into high gear and the bogeys just added up.”

Williams did birdie the fifth, but dropped again at the seventh.

“I managed a birdie at the ninth to turn in even-par and then had a stern talk to myself,” Williams said.

“I told my caddie that we needed to get back to percentage golf – tee shot, approach and two putts, and stop this nonsense, so after a birdie at 10 and a drop at 11, I settled down and played my game.”

Williams didn’t miss a fairway until the 18th and picked up two more birdies at the 14th and 16th. She missed the fairway on the last, but managed to make a great par save and that has put her in a positive mind frame for Friday.

“I just signed a sponsorship with Sunlight Solo and my biggest fear was that people would think Q-School was a fluke,” Williams admitted. “I guess that’s why I was so nervous at the start. I’m proud that I rallied to finish under par. The back nine here at Houghton is especially tough and I played my best golf coming home. I feel really good going into the final round.”