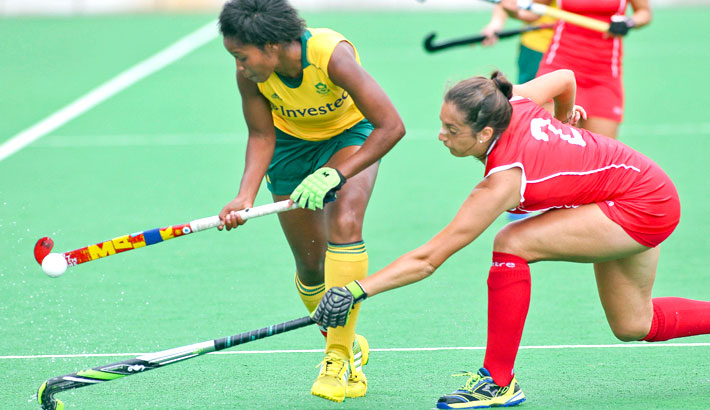 The victory means SA take an unbeatable 2-1 lead in the four-Test series. The girls in green and gold won the first Test 4-2 while Chile won the second Test 2-0. The final Test left is on Tuesday at 6.30pm.

Throwing the ball around to good effect from the outset, SA looked on song, and Damons’ extreme speed was proving to be a defender’s nightmare.

The slippery Manuela Urroz was Chile’s strike weapon and she, too, was asking questions of the SA defence, but much of the first-chukka action broke down outside the respective strike zones as the visiting team’s tenacious defence held sway. However, that soon changed.

One minute into the second chukka (16th minute of the match) the crowd came alight when midfielder Illse Davids went unchallenged into the strike zone and picked her spot with a crisp strike, the Chileans backing away, not for the first time in the series (1-0).

Two SA penalty corners came and went before Candice Manuel finished accurately in the 21st minute (3-0). The girls in green and gold were on fire, netting superb three goals inside six minutes.

Five minutes after half-time (35th of the match), Lilian du Plessis got on the scoresheet with a well-timed PC drag-flick and at 4-0 with 25 minutes to go, SA were running riot.

A Damons effort was cleared off the goalline before Davids fed fellow Capetonian Manuel for 5-0 in the 38th minute. In the 41st minute, penalty corner injector Erin Hunter followed up Du Plessis’ disguised PC shot/pass to tip the ball home and SA were 6-0 up.

Once again it was a three-goal blitz inside six minutes.

There was lots of goalmouth action in the final chukka, the Chileans playing much better, but there was no further addition to the score.