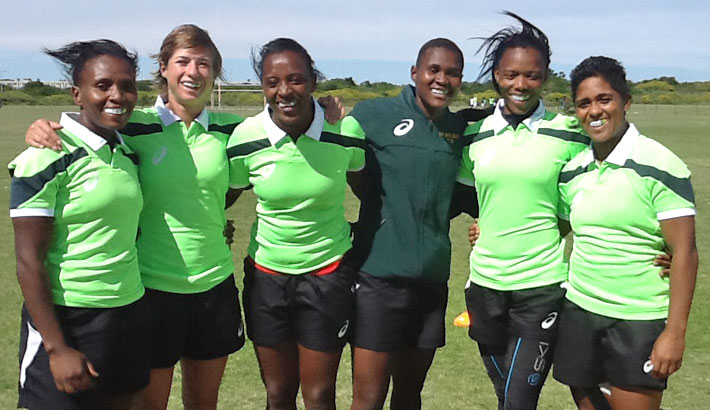 Jordaan Back to Lead Sevens in Brazil

Springbok Women’s Sevens captain Zenay Jordaan has recovered from surgery to her knee and will lead the team in the second leg of the World Rugby Women’s Sevens World Series in Brazil on 7 and 8 February.

Jordaan missed the opening leg of the competition in Dubai in December after having a scope on her knee, but she has made good progress since and is ready to take to the field.

The only other change to the 12-member squad that participated in the Dubai World Series is the inclusion of back Siviwe Basweni.

Springbok Women’s Sevens coach Renfred Dazel was pleased to welcome back his regular captain and 2013 Springbok Women’s player of the year and said: “Zenay is a fantastic leader and player. Her experience and play-making abilities will be invaluable in Brazil.

“She is a key member of the squad, and her guidance on the field in the last few months despite being on the sidelines – while undergoing rehabilitation – has been fantastic.”

Dazel was also excited to see what Basweni could offer and said: “Siviwe has been working hard at training, and she deserves a chance to show what value she could add on the field.

“We invited Kirsten Conrad, Nolusindiso Booi and former netball player Sunelle Barnard to train with us, and this has raised the level of competition in the training squad.

“That said, it will always be tough to select only 12 players, but we believe continuity in selection is important, while also giving the players who raise their hands at training a chance,” said Dazel.

“We have certainly achieved that while selecting this squad, and I have no doubt that we have selected the best possible squad for this specific tournament.”

The team will depart for Brazil on Sunday, 1 February, and will face England, Canada and Russia in the pool stages of the competition on 7 February.