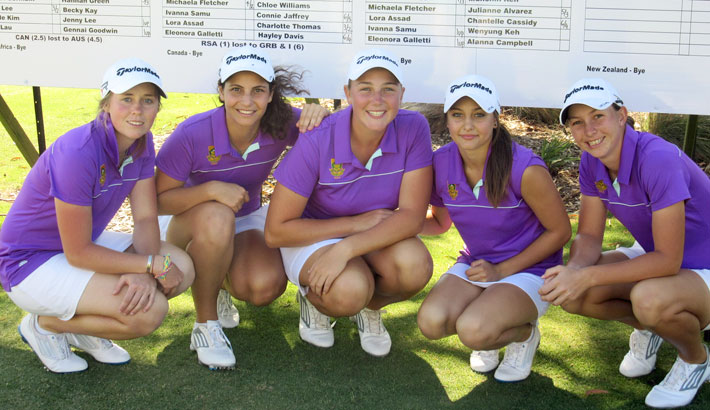 South Africa is heading for an almighty final round showdown against host nation Australia, after a second successive victory in the Astor Trophy in Adelaide on Thursday.

The national team rebounded after a 6–1 loss in their opener against defending champions Great Britain & Ireland and defeated New Zealand 4-3 on Wednesday. The quintet sizzled in the cold and wet conditions in the fourth round to hand Canada a 5-2 drubbing.

Bertine Strauss and Ivanna Samu combined for a 4 & 2 victory against Naomi Ko and Jaclyn Strauss, while Michaela Fletcher partnered 16-year-old Eleonora Galletti to a 2 & 1 result against Grace St-Germain and Alisha Lau in the Foursomes.

Strauss, who bats at number one for the Texas University’s Longhorn Women’s Team, had a tough tussle against Canadian Women’s Development Squad member Ko, who took the game at the last hole.

However, Fletcher from KwaZulu-Natal and Gauteng’s Galletti kept South Africa in the driver’s seat when they halved their respective games against St Germain and Lau.

National coach Val Holland was impressed with the team’s fighting spirit and commitment.

“We took the loss to Great Britain & Ireland on the chin and fought incredibly hard to turn the tide against New Zealand,” Holland said.

“After beating the Kiwis, the team went all out against Canada. They came out firing in the Foursomes to win both games and rallied brilliantly against a very determined Canada to pull off a very solid result.

“Every player on the team brought their A-game to give us a fighting chance and they are really amped for the final round match against Australia.”

Great Britain & Ireland won the event in 2007 and 2011, while South Africa claimed third in both editions.

The Australians currently lead the standings with three victories and 14 games points.

South African and Great Britain & Ireland have both won two matches, however, South Africa only has 10 points in hand against the 15.5 of the defending champions.

“We definitely have a chance to win the Astor Trophy, but we would need to beat Australia 5 – 2 to beat their 14 points to claim victory as the teams will both have three victories each,” said Holland.

“If we tie on points, we will share the cup. It is going to take a huge effort against to beat Australia, with the home course and home crowd advantage, but the girls are determined to give the last game absolutely everything they’ve got.”

Canada and New Zealand will face off on Friday, while Great Britain & Ireland has a bye on Friday.

Round One Results – South Africa (1) lost to Great Britain and Ireland (6):

Photo 1 caption: Team South African pictured after beating New Zealand 4 & 3 in the second round of the Astor Trophy in Australia (from left) Michaela Fletcher, Lora Assad, Ivanna Samu, Eleonora Galletti and Bertine Strauss. After a disastrous start against Great Britain and Ireland, South Africa have recovered strongly with wins over New Zealand and Canada ahead of Friday’s tour finale against Australia. Photo: Supplied