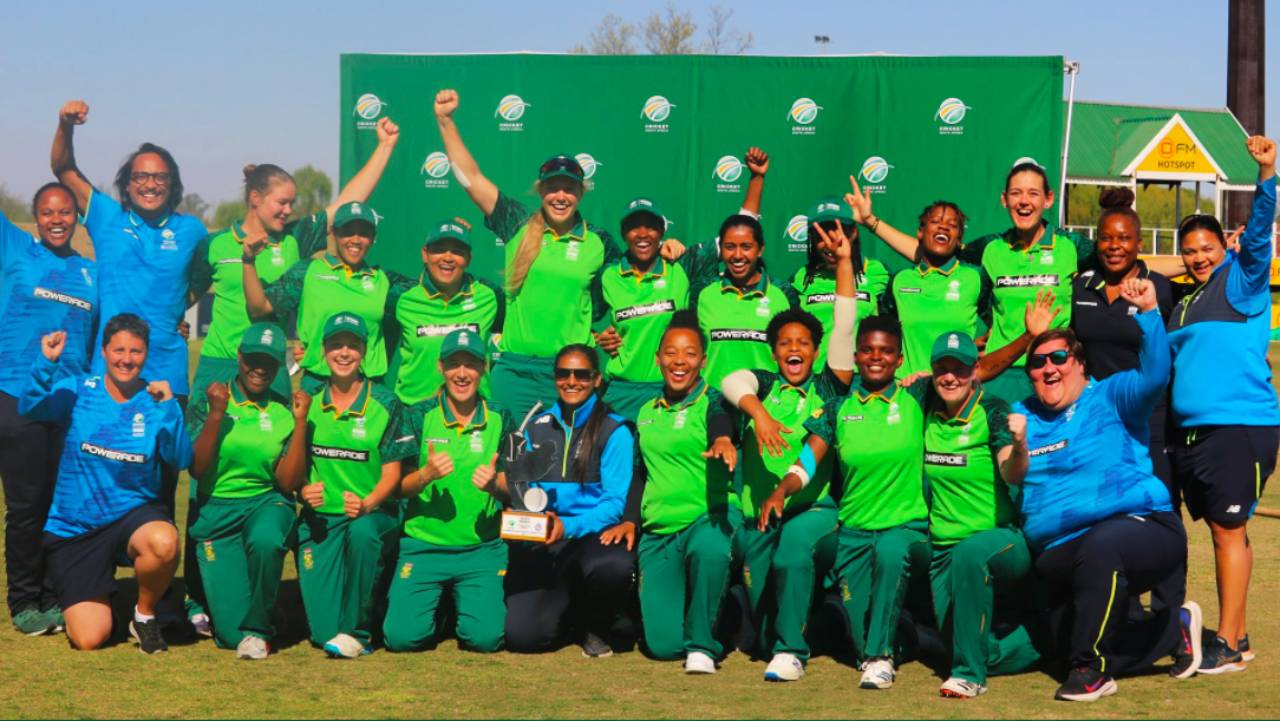 The South African Women’s Emerging team, coached by rising international coach, Dinesha Devnarain, is celebrating a satisfying 3-2 one day series win against a spirited Thailand side in a five match series in Potchefstroom.

SA Emerging got the series off to a winning start with a 45 runs victory in the opening game but Thailand hit back to win the second match by 69 runs and the third game by five wickets to take a 2-1 lead in the series.

The hosts dug deep and staged a comeback to win both the fourth and fifth games for a well earned 3-2 series win.

In a post on Instagram, Devnarain praise the team for showing character and taking ownership of the comeback: “Really proud of the ladies, from being 2-1 down to clinching the series 3-2… ODI series done and dusted – moving onto the T20s now.”

Devnarain will be pleased with how players are putting their hands up and will no doubt be keeping in close contact with Momentum Proteas coach Hilton Moreeng, about the fringe players he may consider for future national duty.

SA Emerging captain Andrie Steyn will be keen to break back into the national set up. She top scored with 79 from 95 balls in the fourth one day game.

Delmi Tucker is also another name that stands out for her all round efforts with both bat and ball. In the fourth game, she was the pick of the bowlers for SA Emerging with 3/37 in 10 overs and in the final match, under pressure, smashed an unbeaten 34 off 29 balls, as the hosts clinched the series.

Cricket South Africa will be delighted with the depth in the SA women’s cricket set up. With the Momentum Proteas dominating in the Caribbean and the SA Emerging team overcoming Thailand in emphatic fashion, the future is looking bright.

Below is a run down of how the series between SA Emerging and Thailand unfolded:

Thailand won the toss and elected to field first. It looked a good decision as they bowled SA Emerging out for 192 in 45.1 overs. Faye Tunnicliffe top scored for the South Africans with 65 from 86 balls with six fours and Saarah Smith contributed 32 from 62 balls, including two fours. Nattaya Boochatham was the pick of the bowlers for Thailand, taking 5/21 in 7.1 overs. In reply, Thailand lost wickets as regular intervals and couldn’t build momentum as they were bowled out for 147 in 41.2 overs to give SA Emerging a 45 run opening victory in the five match series. Khayakazi Mathe was the pick of the bowlers for SA Emerging, taking 3/35 in seven overs. Leah Jones and Delmi Tucker took two wickets a piece.

Thailand won the toss and elected to bat first, making good use of the surface. Opener Nathakkan Chantham racked up the runs, scoring 113 from 141 balls including 15 fours. Nannapat Khoncharoenkai contributed 74 off 80 balls as Thailand posted 277/6 in their 50 overs. In reply, the SA Emerging batters made a couple of starts, with Annerie Derckson making 47 off 76 balls with two fours and Faye Tunnicliffe getting 43 off 54 balls with five balls. But nobody was able to push on and the hosts were bowled out for 208 in 46.3 overs to give Thailand victory by 69 runs. Series tied at 1-1.

SA Emerging won the toss and elected to bat. They were dismissed for 240 in 49.2 overs. Faye Tunnicliffe top scored with 70 off 87 balls with seven fours. Both Delmi Tucker and Leah Jones were run out as they were getting going. In reply, Thailand opener Nathakkan Chantham scored a century – 120 off 128 balls including 14 fours and one six – while wicketkeeper, Nannapat Khoncharoenkai, made 64 off 95 balls with three fours, as the visitors reached 243/5 in 48.4 overs to win by five wickets.

SA Emerging won the toss and elected to bat first, posting 254/8 in 50 overs. Captain Andrie Steyn top scored with 79 from 95 balls while her fellow opener, Nicole de Klerk scored 50 off 71 balls with 7 fours. Saarah Smith also contributed 40 off 46 balls before being run out. In reply, Thailand put in a good effort with key players getting among the runs, led by captain Nareumol Chawai who made 80 off 104 balls including 7 fours. Opener Nathakkan Chantham contributed 42 off 65 balls including five fours. But SA Emerging bowlers stuck to their tasks and took their team to victory with Delmi Tucker the pick of the bowlers with 3/37 in 10 overs. Leah Jones took 2/41 in 10 overs. SA Emerging won by 23 runs.

Thailand won the toss and elected to bat first in the 5th one dayer at Senwes Park in Potchefstroom. They were bowled out for 139 in 32 overs. Nathakkan Chantham top scored with 35 off 38 balls. Jenay Winster was the pick of the bowlers for the hosts – taking 3-28 in 7 overs. Delmi Tucker with an unbeaten 34 off 29 balls and Saarah Smith with 33 from 35 balls starred with the bat as SA Emerging reached 140/5 in 32.2 overs to win by five wickets.