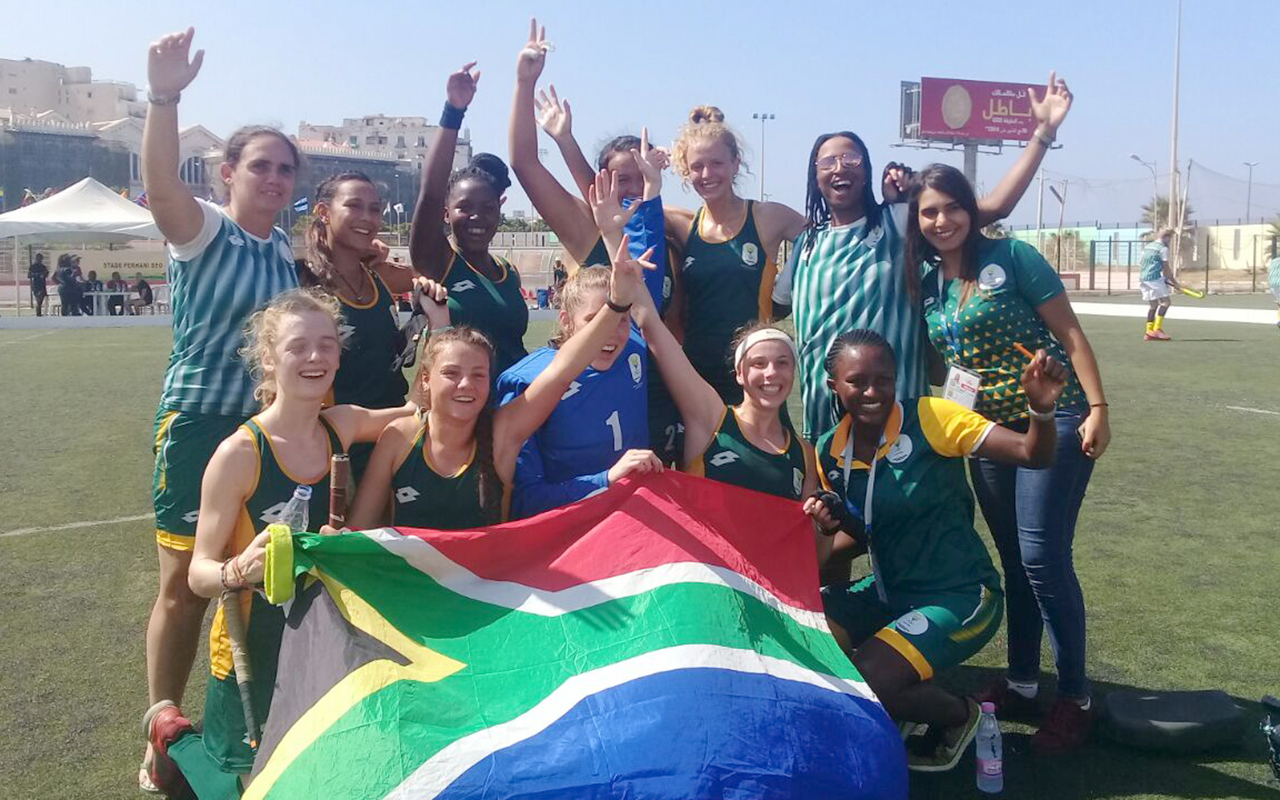 After a week of tough competition the South African girls have emerged as champions of the African Youth Games, contested in Algeria as a Hockey 5s tournament and a Youth Olympics 2018 qualifier, in Buenos Aires later this year.

The tournament featured six sides and one group round robin before semi-finals and finals. South Africa were outstanding in the group stage winning four of their five games, with the dramatic come-from-behind 3-3 draw with Zimbabwe.

Ironically the pool stage finished with Zimbabwe in fourth meaning the only team to deny South Africa a win, would face them in the Semi-Finals.

It was a tense and tight affair for the South Africans with opportunities limited, but South Africa took advantage of the quickfire double so prevalent in the game scoring in the 7th and 8th minutes through Angel Nkosi and Angela Welham respectively.

Taking on the Namibians who featured the Indoor World Cup star Kiana Cormack and coached by Namibian legend Shayne Cormack, Tsoanelo Pholo will be delighted by the performance of her team. After showing fantastic defensive resolution South Africa took the lead through Angela Welham who netted a second to wrap up the title.

This team has now won the right to be selected by SASCOC for the Youth Olympic Games, however the criteria should be considered too.

The qualification criteria – as set by the IOC – stipulates that each National Olympic Committee can only send 1 Team sport per gender.

That means SASCOC will only be allowed to send one girls team across football, hockey, rugby and handball. In considered for this spot the SA hockey girls have ensured they qualify through the African Qualifier and, whether they end up going or not, they have once again shown us that the future is incredibly bright!

Photo 2 caption: New Team Coach Tsoanelo Pholo (right) and Amaarah Hendricks develop a healthy taste for precious metals, after the SA team won 6 out of seven matches in 8 days to win the qualifier and make the best case for SASCOC to choose them as the nominated SA girls’ team to represent the country at the Youth Olympics 2018, in Buenos Aires this October. Photo: Supplied