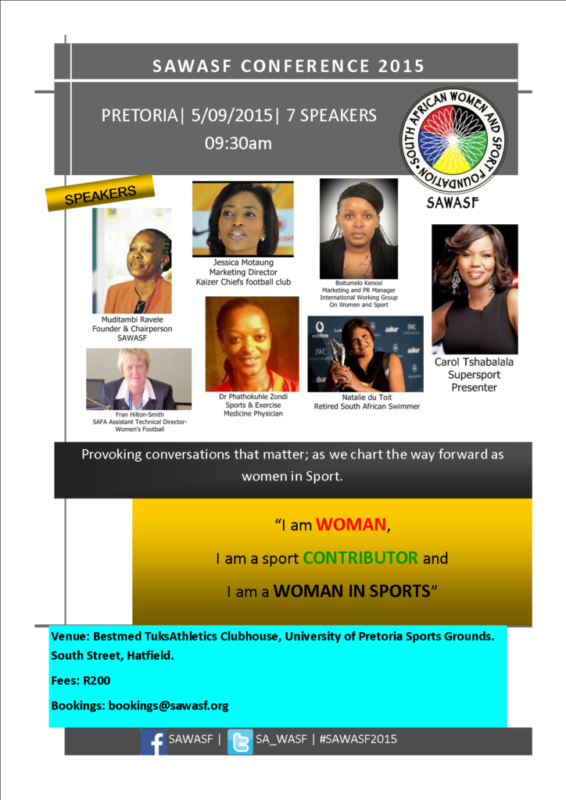 The South African Women and Sports Foundation will be hosting Women in Sports Conference on the 5th September 2015 at the BestMed TuksAthletics Clubhouse. The foundation has announced the 2015 event’s major speakers and the list is comprised of accomplished women from varying sport disciplines.

Muditambi Ravele, the foundations Chairperson and founder will open the event by reflecting on the achievements and impact that woman have made in the sports industry. Ravele’s opening will be followed by a presentation by the International Women Sports Group who will shine the light on women in sport on a global scale.

The focus of the first annual conference will be creating an environment where women in sports can have conversations and reflect on how far women in sports have come. Founder and Chairperson, Muditambi Ravele had this to share “We want to start a conversation with women with the aim of rolling out a Mentorship programme using seasoned sport women as mentors.”

The conference will afford attendees an opportunity to reflect on the strides that have been made by women in sport. “We want to attract more girls into different sporting careers and also provide support structures on their journey to the top in the sports world.” added Ravele.

SAFA Assistant Technical Director of Women’s Football Fran Hilton Smith who’s a former Banyana Banyana coach and an active participant in FIFA substructures will shed light on Coaching and administration in women sport. Media powerhouse Carol Tshabalala who is the only African to have hosted the FIFA Ballon D’or will share her story on how she overcame the barriers in world of media broadcasting.

Kaizer Chiefs Marketing Director Jessica Motaung who’s no stranger to loyal football fans will address the issue of business in the sports world and how she helped create one of most powerful brands in football across Africa.

Sport Science plays a critical role in sports and one woman who can attest to that is Sports and Exercise Medicine Physician Dr. Phathokuhle Zondi . Dr. Zondi was appointed as the official Doctor for team South Africa in the 2012 London Olympics, she was also the team doctor for the South African under 20 national Rugby team which won the Under 20 2012 Rugby World Cup.

Dr Zondi will share the power that sports and medical sciences have and how women in sports can incorporate it into their respective sports.

Former swimming legend Natalie Du Toit who was the recipient of the honorary MBE (Member of the Most Excellent Order of the British Empire) for her services to Paralympic sport in 2013, will share on the challenges that athletes experience and how organisations can contribute to the overall well-being of athletes.

Natalie is also best known for the gold medals she won at the 2004 Paralympic Games as well as the Commonwealth Games. The conference is open to the public but space is limited.

To keep up-to-date with announcements and news for SAWASF 2015 please visit: https://www.facebook.com/sawasf or follow @SA_WASF on Twitter.

The foundation was informally founded in 2002 and registered in 2009 by Muditambi Ravele. The organisations mission is to develop a culture were all girls and women will have equal opportunities, equal access and equal support in sport and recreation at all levels and in all capacities as decision makers, administrators, coaches, technical officials as well as participants so that women and girls may develop and achieve their full potential and enjoy the benefits that sport and recreation have to offer.