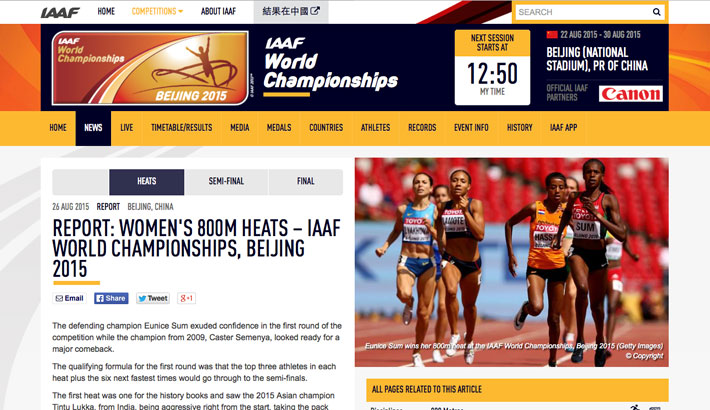 All eyes are on Wenda Nel and Caster Semenya as they fly the flag for SA women in sport, at the World Athletics Championships in Beijing.

Nel, who qualified for the final of the women’s 400metres hurdles, will get her chance for glory at 14:10 SA time on Wednesday.

Speaking after being one of the automatic qualifiers for the final, Nel told IAAF Radio that she was elated with her progress.

“It has been one of my goals the whole year and I knew it was not going to be easy but I am very glad and happy that the work we put in finally paid off. I had to run for that line. It was a tough race but I am very happy that I could be one of the automatic qualifiers.”

Nel says she hopes to execute the perfect plan in today’s final.

“Yesterday in the semi-final, my stride pattern changed a little bit. It is a very fast track so I had to adapt my stride pattern. I went back last night and considered a new plan. I tried it today. It almost worked so hopefully in the final I will execute the perfect plan.”

Semenya, meanwhile, says she is relaxed and taking it one step at a time. “I’m just happy to progress to the semis (on Thursday). The SA track star was speaking to gsport after advancing to the 800 metre semi-final, with a season best time of 1:59.59.

“It’s already an achievement to run under two minutes, so we will just take it as it comes.”

Semenya says it feels great to be getting support from around the world.

Also in action today at 13:10 (SA time) is Justine Palframan in the 200 metre heats. All the action is live on Supersport 6.