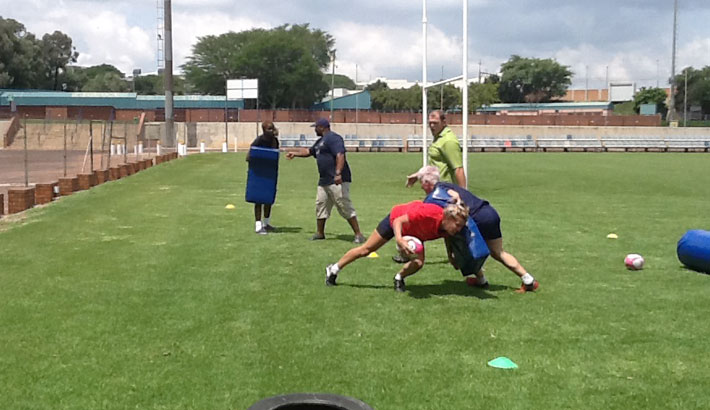 The SA Select Women’s Sevens team arrived in Hong Kong on Thursday ready to improve on their plate final victory at the Hong Kong Invitational on Friday, which marks their first international tournament of the year.

The team will face Papua New Guinea and Brazil in the pool stages of the event being hosted at the Hong Kong Football Club.

Coach Renfred Dazel has been working with his squad since January in Port Elizabeth to prepare them for the season, and with their only matches up to now being against Eastern Province and Border last month, the players have a burning desire to test themselves against international opposition.

“The women have trained hard in the last few months and they are hungry for top-class competition,” said Dazel. “Brazil is one of the teams currently playing on the IRB Women’s Sevens World Series circuit, so they have played in the last four World Series events.

“This means they will be particularly tough to beat. But fortunately we have seen footage of their matches and we know what we need to do deliver a quality performance against them.

“We haven’t seen much of Papua New Guinea, but we trust in our structures and systems and our players know what they have to do to get the desired results. That said, we know it is going to be a tough series, but hopefully the team will do well.”

The SA Select Women finished in fifth place in last year’s edition of the tournament after beating Ireland in the pool stages, Japan in the Plate semifinal and Kazakhstan in the Plate final.

Dazel selected a squad featuring several experienced players and a few new faces, with seven of the 12 players boasting IRB Rugby World Cup Sevens experience, while Vuyolwethu Vazi and Jacqueline Kriel will tour with the SA Select team for the first time.

Should the South Africans win both pool matches, the team will have the opportunity to face other top teams on the World Series circuit such as Canada, Brazil, France, China, Ireland and Japan, who are among the 12 participating teams.

“It is important for us to do well because it will allow us to measure ourselves against some of the other top teams, with an eye on trying to qualifying for the 2016 Rio Olympic,” said Dazel. “It would also boost our self-confidence before the CAR (Confederation of African Rugby) Women’s Sevens in Kenya next month and the IRB Women’s Sevens World Series leg in Amsterdam in May.

“One of our main objectives is to play our way onto the main IRB Sevens circuit next year, and in order to achieve that we need good results. We have laid the foundation in the last few months at training and it is now time to build on that and make our presence felt on the field of play,” explained Dazel.