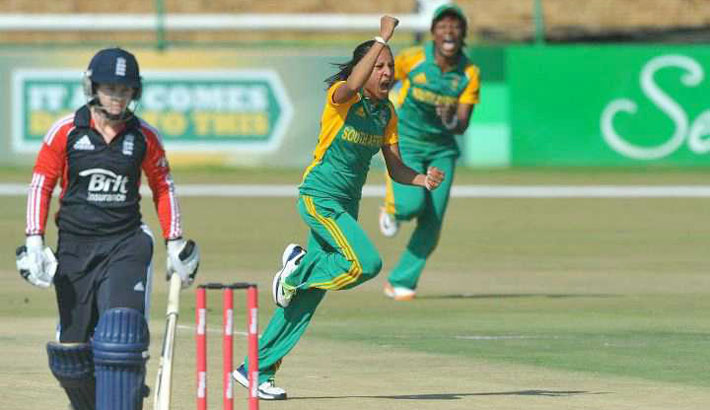 Momentum Proteas all-rounder, Shabnim Ismail, has come a long way since her debut for South Africa at the age of 19 back in 2007.

And to put the cherry on top, her performances have caught the notice of Australia’s Women’s Big Bash League selectors – she may soon heading Down Under for the summer to showcase her skills among some of the world’s best women’s cricketers.

Ismail admits that she is finally maturing as a cricketer, and that the accolades are coming at the right time, as she contributes more and more to the national team’s success.

Having been one of the first contracted women’s cricket players in South Africa, Ismail wants to make it count for something, and help her country win a World Cup, which she believes will go a long way to raising the profile of women’s cricket in SA.

Fighting for the right to be recognised as an all-rounder – as opposed to ‘just’ an opening bowler, Ismail believes in her ability and has utmost faith in her team. A quiet campaigner with eight years in the national team, she is finally ready to fly.

gsport caught up with her in-between her busy cricket commitments, to talk about her SA Sport Awards nomination and her aspirations for the future.

Shabnim, congratulations on your nomination for Sportswoman of the Year at the SA Sport Awards. How did you feel when you heard you were nominated?

I was abundantly surprised because it was so unexpected. After getting the phone call I just sat down for a few minutes in total awe and then it actually hit me that I was nominated as SA Sportswoman of the year.

What are some of your personal highlights of the year, which may have caught the SA Sport Awards judging panel’s eye?

You won the CSA Women’s Cricketer of the Year award this year. How did things change for you after that award?

One thing that stands out for me after getting this award is that a lot of young cricketers started to reach out to me, and this is quite inspiring. Also I got a lot of recognition from the media which made people more aware of women’s cricket in South Africa, and this is really great for women cricketers knowing that the sport is so male dominated.

When I started playing for South Africa I was second change bowler, and now I’m leading the bowling attack – which is a huge honour for me. I was also one of the first female crickets to get contracted by CSA, allowing me to take up cricket as a profession and not having to balance working full-time and following my passion of playing cricket.

Well I’m really working hard on my batting in order to become an all-rounder. I also aspire to become a bowling coach at the highest level once I stop playing cricket professionally.

What is the one thing that can happen next to take women’s cricket forward?

It would definitely be winning the World Cup, so all people can fully recognise and respect women cricketers as much as they do when it comes to male cricketers. This will also result in more resources being allocated to women’s cricket and more opportunities opening up, which will help bring us on par with our male counterparts.

A bumper season to come for the Momentum Women’s Proteas team. What is the main goal for the year ahead?

The ultimate goal would have to be keeping our eye on winning the World Cup.

How does it feel to be part of the national team set up?

It’s always a privilege being part of such an amazing bunch of ladies who bring their own strengths to the team, which helps make up a strong and determined team. No words can express the way it makes me feel being part of this national set up.

What has changed since professional contracts were introduced for the national women’s team?

It has significantly changed our lives and I can’t emphasise enough how this has contributed to improving the quality of our game on the field. Being contracted allows us to focus full-time on training, so we are working much harder now.

We no longer have to put in a full day’s work at the office alongside our cricket commitments, and this brings with it great mental and physical relief.

Cricket is actually a job which many ladies dreamt of, and this is finally a reality, and this furthermore sends a clear message to all young woman that they can indeed follow their dreams, despite the gender barriers they are facing.

It also encourages young female cricketers to put in all the effort to make it to the top.

What do you think of the new leagues being introduced for women’s cricket, like the Australian Women’s Big Bash League?

This is another step to filling the gap in women’s cricket in terms of providing similar opportunities for women as the male players. To my surprise, I received an email two weeks ago to join the Australian Big Bash League, and I am stocked and very excited to be taking part in this. I think it’s amazing for female cricketers around the globe to get recognized for the talent they possess, and the skills they have honed.

What is your advice to aspiring woman cricketers?

There is only one answer: Follow your dream. You may face challenges while pursuing your goal, but that makes it all worth it once you look back at how far you have progressed.

What is your ultimate cricket goal?

To become known as an all-rounder, and not just a opening bowler for south Africa.

Photo 3 caption: One of the first women players to be receive a contract from CSA, Ismail credits that development as critical in the advances the national women’s team has made in recent years. Photo: Big Pic Photography

Photo 5 caption: Ismail’s ultimate goal? To become known as an all-rounder, and not just a opening bowler for south Africa. Photo: Supplied