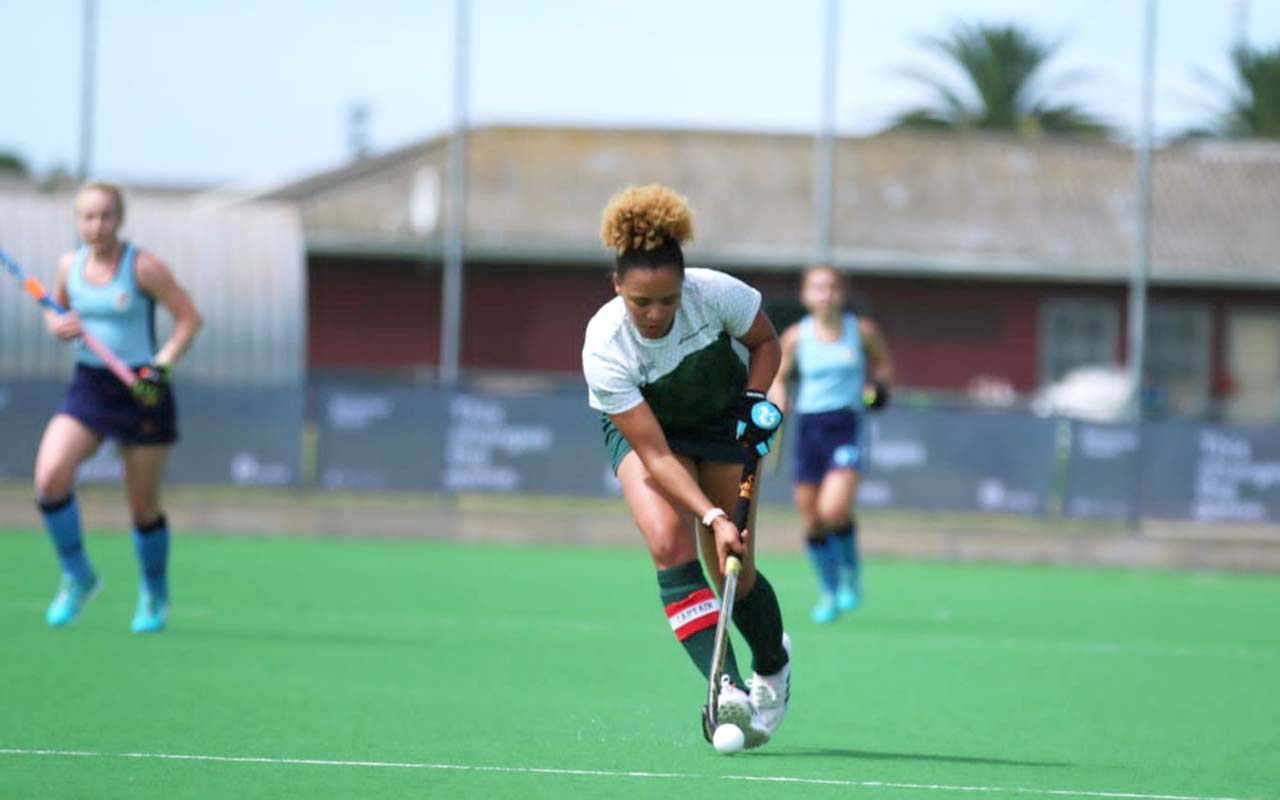 Rising hockey player, Shindre-Lee Simmons is looking forward to represent South Africa at the African Cup of Nations 2022, as she was included in the national team squad.

Born and bred in Free State, Simmons captained the UFS team and has previously represented the South African U21 team.

Looking ahead to the tournament, Simmons is currently one of three uncapped players to be included in the senior squad for the tournament set to take place in Ghana.

She says she is grateful for the opportunity as it has always been her dream to play for the national team.

Shindre, thank you for taking some time out to chat with us. Please tell us more about yourself.

I am Shindre-lee Simmons. Born in Welkom and raised predominantly in Bloemfontein. Went to St Michaels school for girls and started playing hockey in grade 3.

How has life been like growing up in Bloemfontein?

I moved to Bloemfontein when I was 9-years-old and started school at St Michaels at the age on 10, where I first started my hockey journey and develop my love for the sport. I also played squash and did some cross country at school. The journey at SMS has been amazing, the opportunities are endless and the school is like a community, very family-orientated.

Why hockey and not any other sport?

I used to play a lot of other sports including squash, cross country and a bit of casual swimming but with hockey, I was growing as an individual and was able to play with my friends, which was all I wanted to do as a kid. That love for hockey grew overtime and I was able to lead the first ladies Kovsies side and get many other opportunities from the sport.

How did you feel when you received the news that you will be representing South Africa at the African Cup of Nations in January 2021?

I was shocked. Definitely didn’t expect that. I was also really just grateful for the opportunity given to me on that level of playing and ultimately, representing my country which has been a dream of mine since I was a little girl.

There was a time when you captained the University of the Free State (UFS), while running out your fifth USSA tournament. How did you balance both projects successfully?

I think time management and really just enjoyment of the sport is what kept me going and I think my support system. The support system I have is outstanding and I wouldn’t change the people on my team for anything.

I also think the assistance of the coaching staff at Kovsies and their willingness to help wherever they can has really enabled to get the best out of myself for whichever team I’m representing at the given time.

Who are the sportswomen you look up to and why?

Mrs Marietta Lotter has played a major role in the crafting me into the hockey player that I am today. She was the head of junior school hockey at St Michael’s when I started hockey. There have also been many women who have encouraged me to never lose sight of my goals and dreams, and those are my role models.

What is your hockey highlight to-date?

The feeling of representing my country for the first time, badge on your chest, singing the national anthem as loudly and as proudly as possible.

What do you still hope to achieve in your career?

Definitely to represent my country more frequently and ultimately to grow as a player and an individual.

You are one of the uncapped hockey players included in the Protea for squad for the tournament in Ghana. What are your aspirations and goals at the tournament?

Time management and just making sure I still take time out for myself to ensure that I’m mentally strong to deal with whatever adversity.

What are your thoughts on the current state of women’s sport in our country?

There’s definitely a lot of room for improvement and recognition. However, I believe that noticeable progression has been made in women sport which is spectacular.

What advice do you have for an upcoming student-athlete trying to balance both?

You’re going to have to make sacrifices but if you are willing, you’ll succeed.

Photo 1 Caption: Rising hockey player, Shindre-Lee Simmons is looking forward to representing South Africa at the African Cup of Nations 2022, as she was included in the national team squad. Photo: Supplied