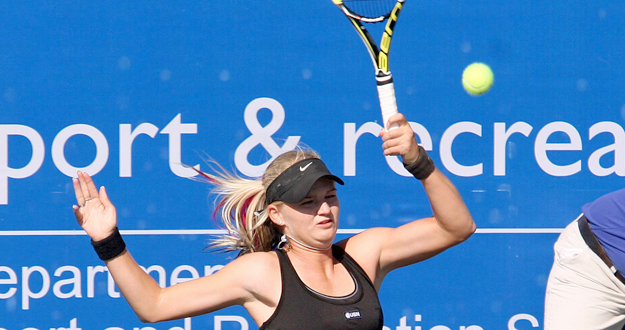 South Africa’s Chanel Simmonds outwitted the No 2 seed Julia Glushko to book her spot in the semi-finals of the Soweto Open at the Arthur Ashe Tennis Centre on Thursday.

Simmonds ensured the country’s hopes remain alive by keeping her nerve in what was a rather tumultuous affair in the opening match on centre court, advancing in straight sets 7-5 6-0.

With each player breaking serve at least twice during the opening set, it was the South African who hung on to clinch the final three games and more importantly, all the momentum with Glushko reaching new lows.

“The first set was very up and down and I think I got in her head because she seemed very uneasy and lost a lot of patience,” said the World No 181 and fifth seed.

“So I think in the second set, she was just swinging and trying to hit winners off the second ball to I just tried to keep it in and hit five, six balls knowing she’d miss, so I think that was the difference.”

After clinching the opening set in just under an hour, Simmonds needed only 20 minutes to wrap up the match, staying composed throughout.

“It is tough because it can be so up and down – I can win and lose my serve to love – so it’s just a matter of keeping calm and trying to concentrate during every point especially when it’s 4-4 or 5-5 and it comes down to one or two points,” she explained.

She will next play Nadiya Kichenok from the Ukraine who didn’t have it all her own way against Great Britain’s Jade Windley but eventually stamped her authority on the match, coming back to win 1-6, 6-2 6-2.

“I started a bit slow, wasn’t moving good and that’s why I made so many mistakes. So I tried to stick to my game plan, be focused and move around a bit better and it started working,” said Kichenok, who is relishing the chance to deny Simmonds a place in Saturday’s final.

“I’m looking forward to our match because last time I lost against her and I know what to do this time so hopefully it will work,” said Kichenok, who is nine places above Simmonds in the world rankings at No 172.

Meanwhile, Serbia’s Teodora Mircic downed yet another seed as she continued her march into the last-four, this time over No 3 seed Tadeja Majeric, 5-7, 6-1, 7-5 and will come up against Hungary’s Timea Babos who ended Great Britain’s Samantha Murray’s run in three sets.