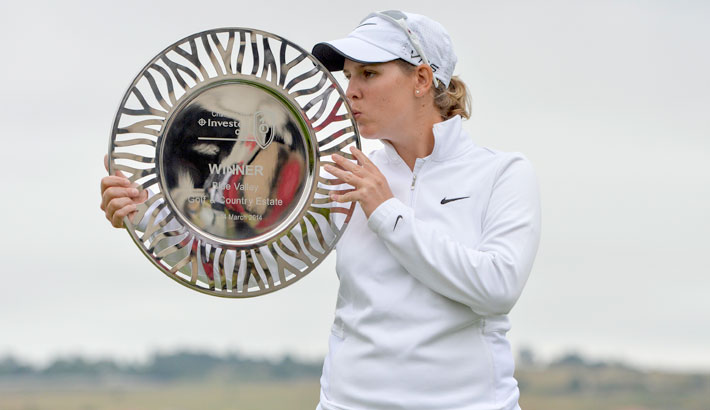 Ashleigh Simon saved her best for last as she claimed her third Sunshine Ladies Tour title in as many weeks with an emphatic eight stroke victory at the Chase to the Investec Cup for Ladies on Friday.

Simon fired a five-under-par 67 for a winning total seven under 137, while Cecilie Lundgreen from Norway and England’s Lauren Blease finished a distant second on one over 145 after carding a pair of 73s.

Simon started the final round tied for the lead with former Women’s World Cup partner, Laurette Maritz, on two under. She put distance between herself and the chasing pack with birdies at the second, third and fifth and, after voiding a three-putt bogey at seven with a birdie at the 13th, there was no chance of catching the four-time champion.

Simon drained a 35-meter curvy, downhill putt for birdie at the 16th to increase her unsurmountable lead and signed off with a tap-in birdie after a superb chip to the 18th green.

Maritz took fourth on three over 147 with a closing 77, while Sun International Challenge winner Tandi von Ruben finished a further shot back with a final round 73.

Simon’s third win pushed her earnings just over the R60,000 mark and vaulted her to the top of the Order of Merit.

Ironically, Simon won SA Women’s Open twice and claimed a number of victories in pro tournaments between 2004 and 2009, but all these triumphs came during her illustrious amateur career.

The 23-year-old Johannesburg pro was thrilled to finally add to her trophy case in South Africa. “It’s so great that I finally get to take home the cash,” she laughed. “I never won as a pro here in South Africa. Both my pro wins at the Catalonia Ladies Masters (2007) and the Portugal Masters (2011) came on the Ladies European Tour (LET).

“I am so pleased that we have a pro tour again. It was so great for all of us to play in front of our own people and for me, to win with my family and friends around.”

Simon departs for the United States on Sunday, where she will give her new LPGA card its first workout at the LPGA Founders Cup. For the first time, she feels ready to compete in America. “I made very few bogeys, I’ve scored consistently well and my game between tee and green has been very solid in the five events I played,” she said.

“I’m excited to go and that’s down to the fact that I have been competitive and my game is ready.”

Simon’s premature departure opened up a spot for England’s Blease in the field for the Investec Cup for Ladies, which is limited to the top 10 available players on the Order of Merit.

The LET Access Series campaigner was thrilled to learn that she will be teeing it up in the R300,000 event next week. “I jumped to 11th in the rankings, but I had no idea Ashleigh was leaving,” Blease said.

“It was the best surprise ever. I came over here to play the Sunshine Ladies Tour to get my game sharp for the season. This is such a fantastic bonus.

“I’ve had a best time and it looks like I peaked at exactly the right moment.”

And Francesca Cuturi, who was disqualified for signing for an incorrect score in the first round, also received some good news.

Cuturi scored three top 10 finishes and her earnings of R26,851 over six starts kept her in the top 10 and the seventh ranked Randpark pro will also line up to claim the R100,000 winner’s cheque in the season-finale at Millvale Private Retreat and the Lost City Golf Course from 21-23 March.

Photo caption: Ashleigh Simon added her first three professional titles South Africa just in three weeks, her 8-stroke win at the Blue Valley Golf and Country Estate in Midrand on Friday a morale-boosting best before heading off to the USA on Sunday to contest the LPGA Founders Cup. Photo: SASPA